Independent Report on Charlottesville: Another Profoundly Flawed Investigation to Deceive the American People 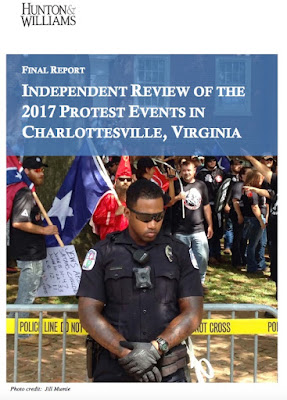 No doubt, the 220-page Independent Review of the 2017 Protest Events in Charlottesville, Virginia, conducted by Former U.S. Attorney, Timothy Heaphy, (which you can download and read yourself) sounds very plausible on its face. In its preface, it claims to have made an exhaustive effort to put together a coherent narrative of the events that took place in Charlottesville, VA, especially the violent confrontations that occurred 11-12 August 2017, which led to “tragic manifestations”:

No one will dispute that it provides a “coherent narrative”, where the coherence of available evidence serves as a criterion (or measure) of the truth of an account. Unfortunately, this narrative, in spite of its coherence, does not provide an account of the Charlottesville events that is true. This appears to be the case because it has not taken into consideration all of the available evidence, which means that it qualifies as an example of the fallacy known as “special pleading” by citing only evidence favorable to your side.

According to the report, the most “tragic manifestations” of these events were: (1) the car wreck that took place at 4th and Waters Streets involving a vehicle driven by James Fields; which (2) collided with a large group of counter-protesters and killed Heather Heyer; and where (3) the subsequent crash of a Virginia State Police helicopter lead to the death of two Virginia State Police Troopers. Few will deny that, if the report is wrong about these three crucial claims, as I shall demonstrate here and now, then its credibility will have been demolished.

(1) James Alex Fields was not the driver

The Washington Post, “Charlottesville response to white supremacist rally is sharply criticized in report” (1 December 2017), includes the classic photo of the vehicular assault that appeared on the front pages of The New York Times and other newspapers around the world, but does not observe that it was a fabricated photograph that was photo-shopped using resources from as many as three takes of the staged crash. Notice, in particular, that there is a black Toyota pickup to its right: 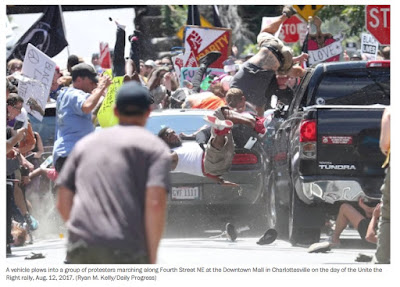 It makes a dramatic image, but does not correspond to real events that took place in real time, where we have no less than three video studies showing multiple takes: one with one car (and the black Toyota pick-up at its side);one with one car (but no black Toyota pick-up at its side); and one with three cars, including a maroon van (which had been left at the intersection for about five minutes prior to the staged collision to insure they did not suffer whiplash or other harm to their bodies): 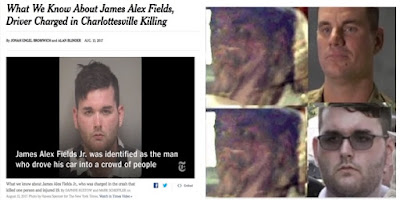 The driver was identified by The New York Times, “What we know about James Alex Fields, Driver Charged in Charlottesville Killing” (13 August 2017), as James Fields, yet the man driving the vehicle is obviously not him. How can an “independent review of Charlottesville” be taken seriously when it does not even properly identify the actual driver of the Dodge Challenger that was used in a staged even at 4th and Waters Street? And this blunder does not stand alone in Timothy Heaphy’s report.

(2) Heather Heyer did not die in the car crash

The perpetrators of these deceptions have made it a practice of asserting deaths that did not occur or did not occur as they allege. We have proven, for example, that the Sandy Hook children were photo-fictions made up of older children when they were younger. And Mona Alexis Pressly has established that, in case after case, the alleged “victims” of the Las Vegas massacre died in other states or on other dates or from different causes of death. According to Timothy Heaphy, a bystander, Heather Heyer died in the car crash in Charlottesville:

Her death is cited four times in the report: on page 6 (twice), on page 7, on page 163, and in the timeline on page 193 (shown here). According to The Los Angeles Times,“Charlottesville honors Heather Heyer at Memorial Service”(16 August 2017), “Heather Heyer, 32, was killed when a car rammed into a crowd of people protesting a white nationalist rally in Chaerlottesville, VA”, where this photo appears: 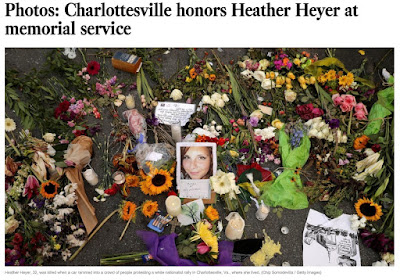 Heather Heyer has been difficult to track down, but Mona has discovered that she died the following day, 13 August 2017 from a heart attack, as her mother admits, rather than on 12 August 2017, the day she is said to have been hit by a car, which is consistent with her prior findings about the Las Vegas “victims”. A new listing has her dying on 8 December 2017, which (as of today) has not yet even arrived. 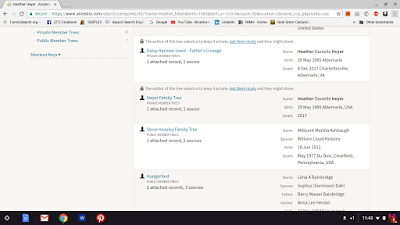 (3) State Troopers did not die in a Helicopter Crash

Once again, according to Timothy Heaphy, two Virginia State Troopers were killed that afternoon during a crash of the helicopter they were using to conduct surveillance related to the events taking place in Charlottesville. This case is especially striking because Heaphy cites a preliminary report by the National Transportation Safety Board (NTSB) released on 5 September 2017 that does not identify the cause of the crash but confirms that Lt. H. Jay Cullen and Trooper-Pilot J.M. Bates were both killed in the crash: 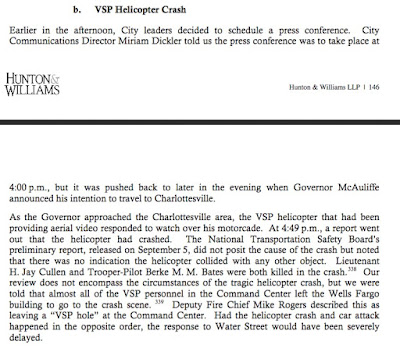 That is very surprising, since we have photographs of the troopers departing the scene of the crash wearing their flight uniforms and very much alive. That the NTSB should be participating in this event does not surprise me, since they covered up the causes of the death of Sen. Paul Wellstone, his wife, daughter and three aides and their two pilots on 25 October 2002, as John P. Costella, Ph.D., and I explained in “The NTSB Failed Wellstone”, fromthewilderness.com. We have proven that government agencies are participants in these events to promote a political agenda or cover up crimes. 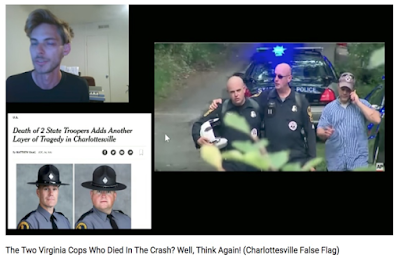 Just to reinforce the point, here’s the video that captured their survival and recovery:

We have seen this movie before. The government convenes a commission to investigate an event of enormous political consequences for the future of the nation, where the result is an elaborate cover up, even with the citation of massive documentation in its support. We saw that with The Warren Report(1964) and again with The 9/11 Commission Report (2004), neither of which can withstand critical scrutiny. (See, for example, “JFK: Who was responsible and why” and “9/11: Who was responsible and why”.) So we should not be surprised that this “independent review” is a farce.

In its introduction, the report asserts its objective of “making sense of the tragic events of 2017” by reviewing “hundreds of thousands of documents” and viewing “many hours of videos and thousands of photographs”; but they cannot have reviewed the right ones and have missed that James Alex Field was not the driver; that Heather Heyer did not die during the car crash; and that the two state troopers survived their crash. How can we learn “how this community and other small cities can better handle large protest events” when then don’t even have the most basic facts straight?
When the alternative media, with its minuscule resources and limited powers, can solve cases that state and federal governments, with their vast powers and resources, cannot, the proof that we are in the grip of a fascist state can no longer be denied. As this case exemplifies, the mainstream can no longer be trusted to provide accurate information about even relatively uncomplicated events like those that occurred in Charlottesville. And it pains me to be forced to conclude that even that once-great institution of higher learning, Mr. Jefferson’s University, no longer serves as a beacon of light toward the attainment of truth and justice in America.
Jim Fetzer, a former Marine Corps officer, is McKnight Professor Emeritus on the Duluth Campus of the University of Minnesota and co-editor of moonrockbooks.com, which has just published: 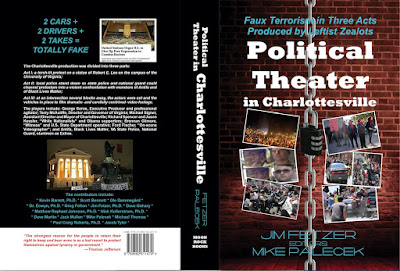