The Lynchpin MEME That Will Take Down the Shadow Government

Is this why SOTN has been under such unrelenting attack?

And, was forced to set up a new website here: http://StateoftheNation.co/ ?

Jeffrey Epstein meme was started by SOTN
on the very same morning that
“Epstein didn’t kill himself.”

The screenshot posted below of the SOTN website tells the whole story.

On Saturday morning, August 10 2019 — the day that Epstein allegedly died — State of the Nation published an article under the title and subtitle:

SUICIDED!? How does the most famous and closely watched jail inmate in U.S. history kill himself?

Jeffrey Epstein did NOT kill himself.

Here’s a screenshot of that SOTN article posted within two hours of the first mainstream media articles which reported that patently fake news story about Epstein’s obviously staged ‘suicide’. 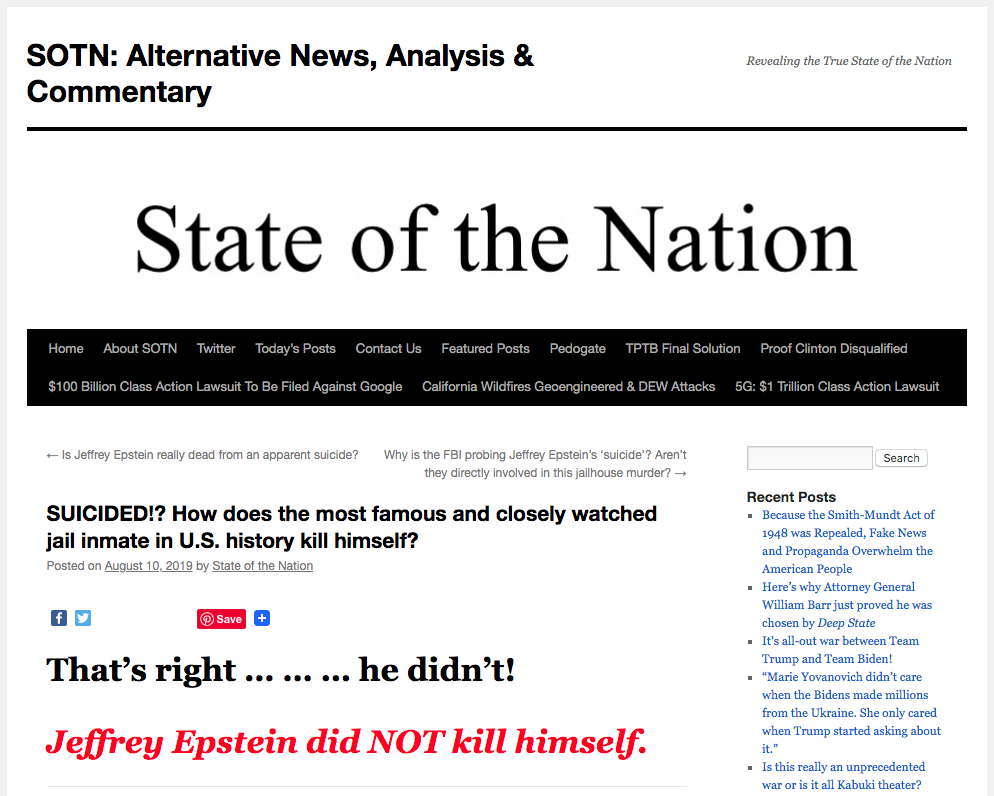 SOURCE: SUICIDED!? How does the most famous and closely watched jail inmate in U.S. history kill himself?

The main reason why SOTN was able to write and post an exposé so quickly is because our investigators had highly anticipated that Epstein would be suicided, Arkancided, homicided or disappeared to Israel shortly after his first bogus suicide attempt…which it was. See this SOTN article dated July 26, 2019 posted two weeks before his disappearance: Will Epstein be Arkancided, suicided, disappeared in a Supermax or secreted away to Israel?

Google knows every digital move on the Internet

Of course, the real problem with this “meme creation story” is that Big Brother Google knows everything.

As soon as that SOTN article was posted the website started having problems that cannot be fixed.

Any Internet investigation of the #Epsteindidntkillhimself meme clearly indicates that SOTN initiated it, and, therefore, receives the blowback from Google, Facebook Twitter and other Big Social Media platforms for inflicting so much damage to the absurd government narrative.

Not only were all the Big Social Media platforms created by DARPA, CIA, NSA, DIA as well as Big Tech entities such as QIntel, each of these is used to monitor “every digital move on the Internet”—24/7.

As a result, the very moment that SOTN posted the meme “Jeffrey Epstein did NOT kill himself.”, we noticed an immediate manipulation of Google search engine results which significantly suppressed the article.

Not only that, an SOTN article that what would have normally received a high level of sustained traffic got relatively little attention, even throughout the Alt Media.

KEY POINT: What’s quite remarkable is the extent to which Google has scrubbed so much #Epsteindidntkillhimself meme content from their search results. For example, if a Google search is conducted today, it returns very little image content of which a tremendous amount has been produced over the past 3 plus months.

It was only a matter of time before hard evidence would emerge that disproved the ridiculous official narrative.

Almost everyone and their brother knew that the authorities outright lied, as they always do, and that Epstein was alive and well … … … and most likely transported to Israel, headquarters for all the major honeytrap operations being run globally 365 days a year.

Then there was this bombshell: It only took 2 and 1/2 hours on August 10th for a prison employee eyewitness to post the following sequence of events at 4 Chan, which could only have been delineated with such specificity by a firsthand witness. 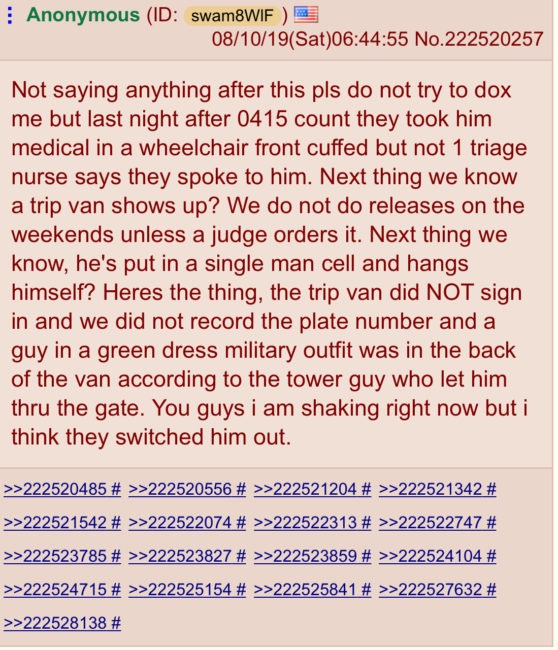 (Source: BOMBSHELL! Prison Eye-witness Says Epstein Was Released Alive in a Wheelchair at 4:15 AM on Day of Alleged Suicide“

The same SOTN article also posted an excerpt from Wikipedia which indicates that Epstein was found dead in his cell at 6:30 AM, which further reinforces the 4 Chan eyewitness account.

There’s one puzzling aspect of the extremely popular worldwide Epstein meme. The CIA’s Mockingbird Media is disseminating it far and wide with unusual energy.

While The Company (aka the C.I.A.) has certainly taken similar initiatives in the past, the corporate media has never taken such a radioactive meme global with such determination; unless, of course, they no longer can control the narrative.

However, whenever this does happen by design, it’s often the case that the C.I.A. is only feeding the conspiracy theory frenzy so that it will mushroom into a massive distraction. What, pray tell, serves as a bigger distraction than the staged Jeffrey Epstein ‘suicide’?!

It ought to be obvious by now that Deep State had no choice but to remove Epstein from the street. His global child exploitation operation was simply too well known to keep under wraps. Too many VIPs were categorically implicated by Epstein’s serial indiscretions and misadventures.

Hence, there was no easy way to remove such a high-profile figure but to orchestrate a drama, which could then be strategically used to function as yet more distraction, diversion and misdirection.

Epstein is surely living a more quiet and safe life in Tel Aviv or some underground laboratory run by his handlers in Israel. Which is perhaps the single most important reason why: 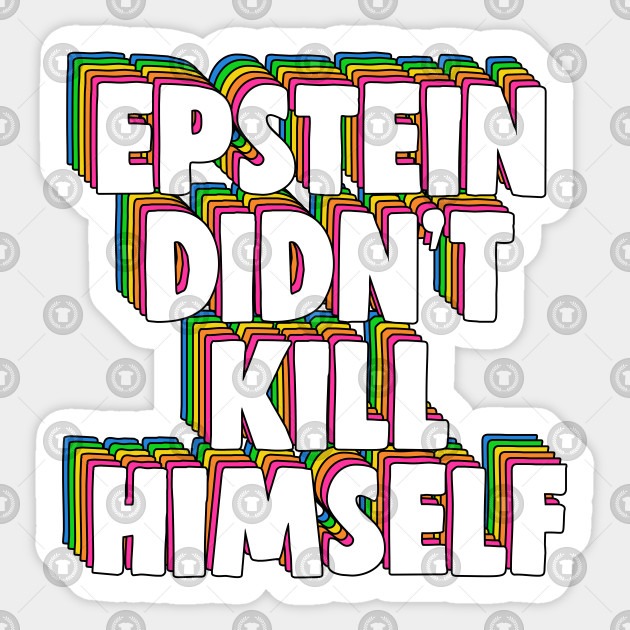 KEY POINTS: It’s entirely true that the Right has been much more effective at generating memes that oftentimes dominate the public discourse. That’s because memes have a mind of their own. And, that’s because they are frequently born of divine inspiration, not satanic calculation. As a result, the Universe will conform itself to viralize those inspired memes which the whole world needs to hear or see right now. No matter how hard they try, the Left cannot hide or suppress what the Higher Power wants revealed.

Conclusion — The Real Power of the MEME

There’s at least one firm conclusion to this compelling analysis, especially after considering the profusion of evidence now available in the public domain:

Another conclusion is that memes have become powerful vehicles for driving the truth home quickly—WORLDWIDE! No matter how hard Big Social Media attempts to censor content or control the narrative, a well-timed meme can blow up their best laid plans.

During this final war between the powers of light and forces of darkness, it will be the light of knowledge that ultimately destroys the darkness of ignorance. Nothing disseminates the truth so quickly and poignantly as a truth meme. The dark side has no defense against it. Therefore, it’s high time for the Patriot Movement to assemble a digital army of memesters the likes of which this world has never seen.

No one should underestimate “The Power of the MEME”. With or without the Internet, truth tellers everywhere ought to be aware of the inherent power of truth over falsehood. Just an anthill of truth can crush a mountain of lies.

Yes, falsehood clearly predominates during this Third Millennium; however, the sword of truth cuts swiftly through web of falsehood. And righteous memes represent some of the sharpest swords in the cyber-arsenal today.