PLANDEMIC: The Pre-Planned Controlled Demolition of the American Economy—WHY?

A Free-fall Economic Collapse
Will Bankrupt the U.S. Citizenry
as a Prelude to Establishing a
Planned Socialist State and
One World Government 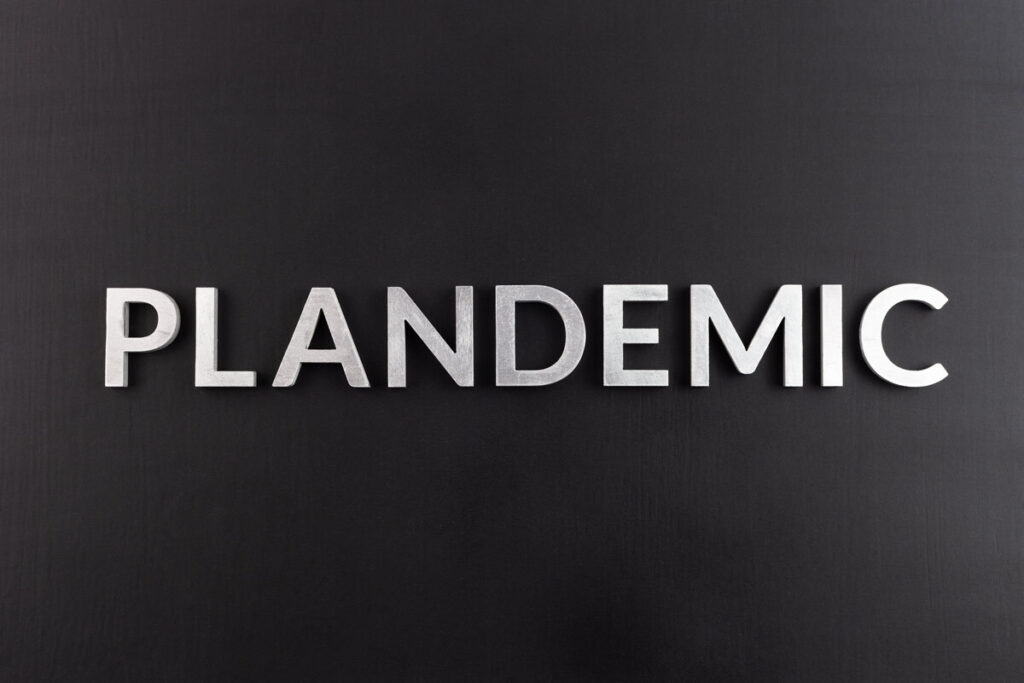 Every patriot and truth seeker knows by now that there are numerous goals and objectives being accomplished via the OPERATION COVID-19.

For example, there is the following listing of just 16 of the main reasons, each one of which aligns perfectly with the globalist goals of the New World Order agenda.

OPERATION COVID-19: 16 Reasons for the
Deployment of the Coronavirus Bioweapon in 2020

However, what does not specifically appear on that list is perhaps the most important and immediate ambition of the NWO globalists—the final collapse of the American Republic.  Toward that end, the hidden perpetrators have been pushing very hard for an indefinite lockdown of the USA in order to trigger both a catastrophic economic collapse and impoverishing financial breakdown.

It should be quite obvious by now that, at the end of the day, the globalists want every American family and small business bankrupted.  What better way to incapacitate the largest gun-owning society on Earth than to so financially ruin the populace that survival becomes the only preoccupation.

A poor and starving citizenry has no time or energy to protest much less the will to launch a revolution against a tyrannical government.  Yes, they might mount a minor revolt here and there, but nothing on the order required to take back the whole U.S. Federal Government.

Hence, their intention is quite clear: the NWO globalists intend to economically paralyze the American people in the aftermath of a controlled demolition of the U.S. economy.

The treasonous perps running OPERATION COVID-19 also know they were never able to take away the firearms even after staging numerous false flag mass shootings, as they have done since the Texas Tower shooting at the University of Texas at Austin on August 1, 1966.  They have not only failed to remove the guns from American society, they know there is no hope of repealing the Second Amendment legislatively.

Therefore, Deep State traitors will utilize OPERATION COVID-19 to fabricate a false pretext by which to incrementally outlaw gun ownership.  For instance, the unconstitutional contact tracing program provides a context for gun-control politicians to expand the fraudulent COVID-19 enterprise into issuing firearm licenses as well as conducting other types of gun monitoring via the “tracers”.

Should the globalists stage a few false flag mass shootings carried out by coronavirus-infected individuals, they will likely present a fake justification for gun confiscation for all COVID-19 cases as a precautionary measure.  This stratagem is undoubtedly on their drawing board, if not ready to roll out some time this year.

Given the burgeoning epidemic of clinical depression and anxiety disorder, not only are suicides on the rise, so are various violent crimes.  Panic attacks and panic disorder, in particular, are frequently being associated with Coronavirus syndrome; hence, medical authorities are likely to press for legislation that limits access to firearms.

The key enforcement mechanism of OPERATION COVID-19 is closely tied to what could be termed Medical Martial Law.  This was the covert plan all along, which is why the hopelessly corrupt World Health Organization has played such a prominent role in the global response.  Not only does a known criminal — Tedros Adhanom Ghebreyesus — head the W.H.O., he has conspired with another criminal — Bill Gates — to poison via vaccination countless children throughout the Third World.

BILL GATES: A Menace to Society Who Must Be Arrested and Prosecuted for Crimes Against Humanity

The bottom line here is that the globalists are determined to defang the American people, short of nullifying “the right of the people to keep and bear Arms”, by debilitating and bankrupting US.

We the People, then, can expect to see one COVID-19 ruse after another, one coronavirus scam after another, all designed to destitute and/or disable as many able-bodied Americans as possible.  This is why it’s absolutely critical to reopen the American economy—Y E S T E R D A Y ! ! !

The globalists know that the longer the economy is shut down the more businesses will close down, many of them permanently.  The ripple effect of business closures throughout the national economy has already been cataclysmic.  With each passing week of commercial stagnation, the negative microeconomic and macroeconomic impacts will stack up such that it will take many years to recover, if that’s even possible by now.  This is why so many Deep State operatives are advocating an absurd 18 month to 2 year partial shutdown that is wholly dependent upon a vaccine being developed.

Not only would such a move completely deplete (and decimate) the middle class, it would effectively transfer all of the business of Main Street to Wall Street.  In this way, Corporate America would become the major beneficiary of the greatest redistribution of commercial wealth in U.S. history.  The creation of Walmart was the beginning of this deliberate trend to wipe out Main Street, a crucial role that has since been taken over by Amazon.com.  What better way to bring all of retail under the rubric of a closely monitored Internet-based retail platform like Amazon, where virtually all of the employees work for slave wages in slave labor conditions?

Much more significantly, the vast majority of Americans would then be held captive by the corporatocracy, always financially compelled and/or economically coerced to comply with the prevailing fashion of political correctness.

However, instead of outright transforming the USA into a socialist USSA where “A” stands for Amerika, TPTB are stealthily creating a hybrid political economy.  A fascist business model has been quite cunningly coupled with a quasi-communist political system where the Left now dominates the political realm via Deep State; whereas the Right controls much of Corporate America through the Military-Industrial Complex and National Security State.

The essential point is that the power elite do not want any pushback from the American people to their plans to establish a One World Government.   With the advent of OPERATION COVID-19, TPTB have signaled that they will no longer tolerate any dissent where it concerns the implementation of their New World Order agenda.  After all, Phase II of this Plandemic and staged panic — OPERATION-1984 — hinges upon their planned One World Currency (cashless and digital) and One World Religion (godless and satanic).

COVID-1984: ‘A Global 9/11’ to Inaugurate a Global Security Superstate

This is it, folks.  It really is do or die a long and slow painful death at the hands of the globalists.  These hardcore warmongers and bioterrorists are playing for keeps just like they did when they launched the 1918 Spanish Flu bioterrorist operation. See: NWO Globalists Using Spanish Flu Pandemic Playbook to Perpetrate OPERATION COVID-19

The sooner We the People get wise to that fact of life, the sooner the perps can be apprehended and prosecuted to the fullest extent of the law.  Perhaps the American people should start with the arrest and prosecution of OPERATION COVID-19 point man Tony Fauci.

Dr. Fauci: The Most Corrupt Career NIH Criminal Ever to Head the NIAID

The current COVID-19 stats clearly indicates that the United States of America was always the primary target of OPERATION COVID-19.  Both the ‘confirmed’ number of cases and deaths in the USA are by far the highest in the world as seen in the table below.  Really, how did that happen except by highly purposeful design?!

Do you get the picture?

Do you see how the screenwriters, producers and directors of this bioterror horror flick have used a fake fear virus to stampede the American people into the pen of OPERATION COVID-19 compliance?  When conducted in this manner, the government doesn’t even have to play the bad guy; your own neighbors will police the recurrent lockdowns, mask-wearing, social distancing and sheltering-in-place.  The contact tracers will even make sure you have received your compulsory vaccination in the future.

The perps know that the more folks they can keep locked down, the more the economy will go into a rapidly accelerating downward spiral.  Once the “Second Great Depression” hits home in all 50 states We the People will be much more concerned with self-preservation than protesting.  Then, the perps can more easily corral the renegades and nonconformists into cattle cars destined for FEMA camps which are really slave-labor concentration camps like they were in Nazi Germany, not extermination camps.

The NWO globalist cabal has always known that the heavily armed and freedom-loving American people pose the single biggest impediment to the implementation of the UN agendas—Agenda 21 and 2030 Agenda for Sustainable Development and EMS Vision 2050.

Each of these fundamentally socialist agendas are designed to make the populace ever more dependent on a highly centralized totalitarian government.  The eventual NWO goal is to foist a tyrannical communist government on the world community of nations.  In point of fact, creeping Medical Martial Law is the most insidious plot behind OPERATION COVID-19; it’s also the primary vehicle by which the globalists are driving world leaders into the early stages of accepting a One World Government.

This is why they concocted a global Plandemic so devastating and frightening to the masses that the people themselves would demand governmental protections, medical interventions and economic aid.  The ultimate goal, of course, will be the roll-out of a mandatory and microchipped COVID-19 vaccine enforced via an immunity certificate.  Once that’s accomplished, controlling all of humanity will be a done deal.  The entire planetary civilization will have been transformed into a permanent planetary penitentiary where COVID-1984 becomes a reality. 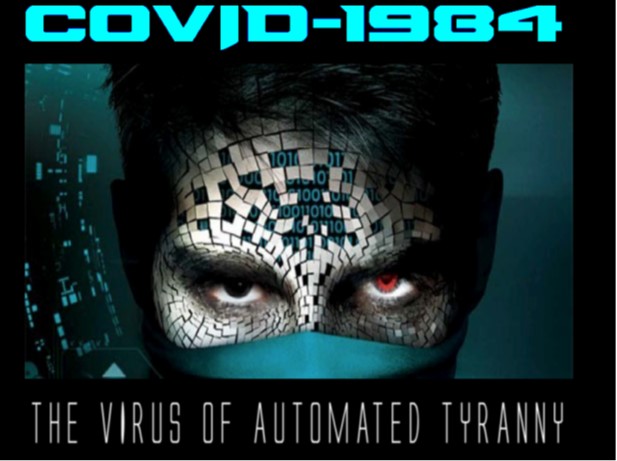 The Powers That Be are clearly guilty of unparalleled overreach.  Not only was their Plandemic an exceedingly desperate move, the execution of OPERATION COVID-19 has been extremely reckless and transparently malevolent.  So foolishly brazen has been their attempt to lock down upwards of 7.8 billion people that they have irreversibly exposed themselves and their multi-century international criminal conspiracy to depopulate the planet.

The real silver lining in the COVID-19 dark cloud is that there are no more NIMBYs to contend with.  The novel coronavirus and/or fear virus, they tell us, is in everyone’s back yard.  But, they somehow failed to realize that when billions wake up to the reality of an ongoing genocide and forced incarceration by way of a bioengineered pandemic — AND THEY WILL — We the People will swiftly light our torches and grab our pitchforks.

Truly, the future of the OPERATION COVID-19 perpetrators does not look good no matter how you look at it.  Especially when there are some serious plans afoot like this citizens’ initiative posted below, the perps are in BIG TROUBLE indeed!

The American Freedom Trifecta of 2020