How is this gender transitioning of children even legal?!

SOTN Editor’s Note:
The first article posted below clearly proves that Angelina Jolie and Brad Pitt were dressing up their 3 year old daughter Shiloh in preparation for a gender transition later on in life.

The second article posted below the first one indicates that “later on” is now.

These two parents ought to be prosecuted for child abuse to the fullest extent of the law.  Shiloh’s entire gender transition scheme was obviously planned out well in advance.

There is something very wrong in America these days. Very wrong indeed!

The 3-year-old’s tomboyish look has tongues wagging, and last week’s cover of Life & Style magazine asking, “Why Is Angelina Turning Shiloh into a Boy?”

But one parenting expert thinks everyone should simmer down and let the child be a child.

“What Shiloh is doing now at 3 is very age-appropriate,” Michelle Golland, a clinical psychologist and MomLogic.com expert, told ABCNews.com. “Kids take on different identities. And she has older brothers. In some ways, she’s going to aspire to be like them.”

Golland said she thinks Jolie and Pitt are taking a healthy approach to Shiloh’s self-expression. “I think they are doing exactly what they should do,” she said. 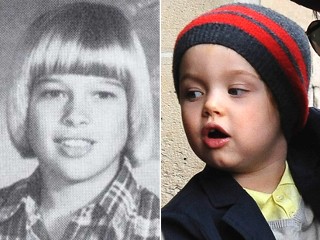 Shiloh looks a lot like her dad Brad Pitt in his yearbook photo.

“The worst they can do is bring shame upon her for things that she likes,” Golland said.

The Gay & Lesbian Alliance Against Defamation, or GLAAD, took the magazine to task for doing just that.

“Life & Style is way off the mark with this outrageous coverage,” Rashad Robinson, GLAAD’s senior director of media programs, said in a statement. “Perpetuating gender stereotypes and targeting children for ridicule about the way they dress is unacceptable.”

But Glenn Stanton, director of Family Formation Studies at the conservative organization Focus on the Family, had a different reaction upon seeing the photo of a boyish Shiloh on the cover of Life & Style.

“I was shocked,” Stanton said. “I thought, ‘What in the world are these parents thinking?’ It’s very possible they are living in a fantasy world, where gender is only an appearance. If so, it’s a very anemic view of what gender really is.

“This little girl Shiloh needs to be able to identify with what she is in her soul, in the deepest part of her humanity. They do her no favor by saying you can change lanes anytime you want in in life,” Stanton said.

Golland’s own son wanted to wear dresses and plastic Barbie heels between the ages of 3 and 4 after his little sister was born. She and her husband allowed him to and now at age 9, their son would probably deny that he ever wore girl’s clothing.

For some children, however, this is more than a phase. In those cases, identifying with the opposite gender is hard-wired and unlikely to change. Golland recommended that their parents seek guidance and support from therapists familiar with gender variance and gender-identity disorder.

More Than a Phase?

Stanton acknowledgeed that gender identity-disorder exists but said parents need to step in and be directive. “Not scold, but gently lead and guide them in what they are, what God and nature has given them,” he said. “It’s not pushing the child, scolding the child, it’s molding the child, enticing, leading the child in the way they should be.”

It’s much too early to know if Shiloh’s apparent boy obsession is more than just a phase, Golland said.

Pitt once said his daughter only wanted to be called by a boy’s name.

Mother Elise Crane Derby, founder of Elisesramblings.com and a contributor to LA Mom’s Blog, said, “Maybe when she’s seven or eight, she won’t be John anymore. Or maybe she has a bigger issue. On any front, it’s better to let the kid be who she wants to be.”

Kristin B. Dunning, who writes a blog called Well Read Hostess and contributes to Philly Moms Blog, said, “She’ll most likely grow out of her interest in having a ‘boy’ haircut and wearing ‘boy’ clothes soon. In the meantime, good for her parents for letting her be who she is, especially challenging, no doubt, in the face of the constant public scrutiny.”

NOW READ THIS ARTICLE FROM JULY 2017 ON THE SAME MATTER Brad Pitt and Angelina Jolie’s oldest biological daughter, Shiloh Jolie-Pitt, has been dressing like a boy for years and now, a shocking rumor claims the child wants to change sex.

As fans may have noticed, Shiloh has never been a girly girl and is often seen wearing male clothing. That said, a gender change appears to be a bit far-fetched considering the child is just 11-years-old.

According to a report by The Silver Times on July 3, the rumor regarding Shiloh’s alleged wishes to become a boy began days ago after the publication of an El Mundo report. As the outlet explained, El Mundo cited an AFP source in its article but deleted the post after making the surprising allegation.

In the since-deleted article, the outlet claimed the daughter of Brad Pitt and Angelina Jolie had allegedly decided to begin hormonal treatments to change sex. However, the AFP later confirmed that the rumor did not come from their site and requested the outlet withdraw their credit to the report.

Although the latest Shiloh Jolie-Pitt rumor is incorrect, her mother, Angelina Jolie once confirmed her desire to be a boy. As fans may recall, Jolie opened up about Shiloh’s style preferences during an interview with Vanity Fair in 2010.

“[Shiloh] likes to dress like a boy. She wants to be a boy. So we had to cut her hair. She likes to wear boys’ everything. She thinks she’s one of the brothers,” she explained, according to a report by E! News.

Brad Pitt and Angelina Jolie have a total of six kids. In addition to 11-year-old Shiloh, they are parents to 15-year-old Maddox, 13-year-old Pax, 12-year-old Zahara, and 8-year-old twins Vivienne and Knox.

Brad Pitt and Angelina Jolie tied the knot in August 2014 and called it quits on their relationship just over two years later. Since then, they have been attempting to sort out the details of their divorce and custody arrangement for their six kids.

Following their breakup, Shiloh and her siblings traveled to a rental home in Malibu with their mother, where they remained up until recently when Jolie purchased a new home for their family in Los Feliz. As for Pitt, he continues to live in his and Jolie’s former marital home, which is also located in Los Feliz.