Dov Katz, head of the computer vision and machine learning group at Facebook-owned Oculus, has been charged in King County for attempted commercial sexual abuse of a minor. The 38-year-old tech exec allegedly attempted to contact what he believed to be was a 15-year-old girl for sex.

The fictitious 15-year-old was actually an undercover police officer with the Tukwila Police Department, a city just south of Seattle.

The news was first reported by KING 5, which said that Katz was arrested by Tukwila Police on Wednesday. Katz is to be arraigned on January 5th, and bail was set at $125,000. An Israeli citizen who resides in California, Katz is forbidden to have contact with any minors, except in the presence of a responsible adult, according to charging documents.

Katz allegedly responded to an online advertisement that offered sex in exchange for money, an ad which was posted by undercover police officer posing as a 15-year-old girl. Katz allegedly arranged a meeting at the Embassy Suites in Tukwila, offering to pay $350 to have sex without a condom. When Katz arrived at the hotel with $600 in cash, he was arrested by police.

Upon his arrest, Katz told the officer that he was there to rescue the girl, and should have first called police, according to charging documents.

We’ve reached out to Facebook representatives for comment, and we’ll update this post if we learn more. Facebook purchased Oculus — one of the leaders in virtual reality technology — for about $2 billion in cash and stock in 2014. Oculus operates a large engineering office in Seattle. Katz was profiled in a Times of Israel story in 2014 for the role he played in helping to develop the Oculus Rift headset.

Here’s how the charging documents read: 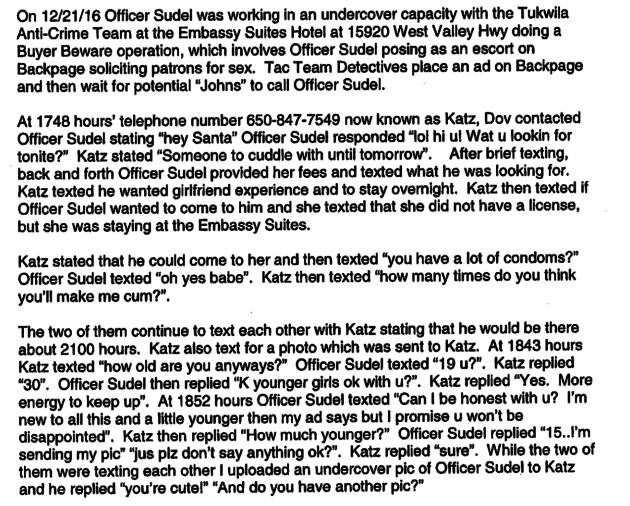 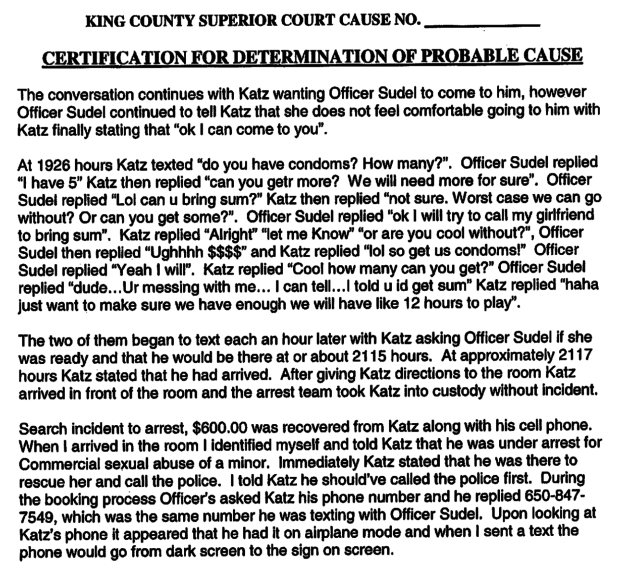