If you search for “Hillary Clinton” and “health” on Google, you’re likely to come up with some pretty terrifying stuff — and much of it is false. Photos of the 68-year-old Democratic presidential nominee apparently so weak that she has to be helped up a short flight of stairs by aides. Speculation that the head injury she suffered in 2012 is still affecting her. Documents purportedly summarizing visits to a medical provider for an unspecified illness.

Whether you think it’s fair or not, Clinton’s health is becoming an issue in the campaign and it’s almost impossible for the average person to sort through the misinformation and fake information online to get to the real facts.

For the record, Clinton has released a letter from her personal physicians attesting to her good health and fitness to serve as president of the United States, should she be elected. (Clinton’s Republican rival, Donald Trump, who appears to be healthy, has done the same, although the letter is highly unusual.) Hillary Clinton loses her balance briefly as she arrives for a tour of SC STRONG, a home for ex-offenders and substance abusers on the grounds of the former Charleston Navy Yard in North Charleston, S.C., on Feb. 24. (Jonathan Ernst/Reuters)

Also for the record, the photos of her being helped up the stairs aren’t recent but from months ago; her doctor has specifically addressed the issue of lingering effects of the old accident on her brain (there are none); and those papers — which appeared, then disappeared — were apparently forgeries.

That hasn’t stopped some critics of Clinton from seizing on the rumors to portray her as being in poor health. Rudy Giuliani urged people to “Go online and put down, ‘Hillary Clinton illness,’ and take a look at the videos yourself.” Fox News host Sean Hannity has described Clinton shaking her head as “almost seems seizure-esque to me.” And who can forget Trump’s allegations that “she took a short-circuit in the brain”?

For more specifics, check out The Washington Post’s Fact Checker, where reporter Glen Kessler has posted a detailed analysis of what has been said about her health and how those comments hold up.

[Zika may be linked to the disability that Donald Trump mocked]

From the days of Woodrow Wilson (whose failing health was concealed by his inner circle of advisers) and Franklin Roosevelt (who despite his weight loss and weakness ran for his fourth and final term), the health of presidential candidates and presidents has long been a source of public interest and debate. In 1999, when John McCain first ran for the highest office, he made public 1,500 pages of medical and psychiatric records. Then in 2008, after he had been diagnosed and treated for cancer, McCain allowed reporters to review even more records to confirm that he was cancer-free. During the 2004 campaign, George W. Bush released records that showed, among other things, extensive dental work. 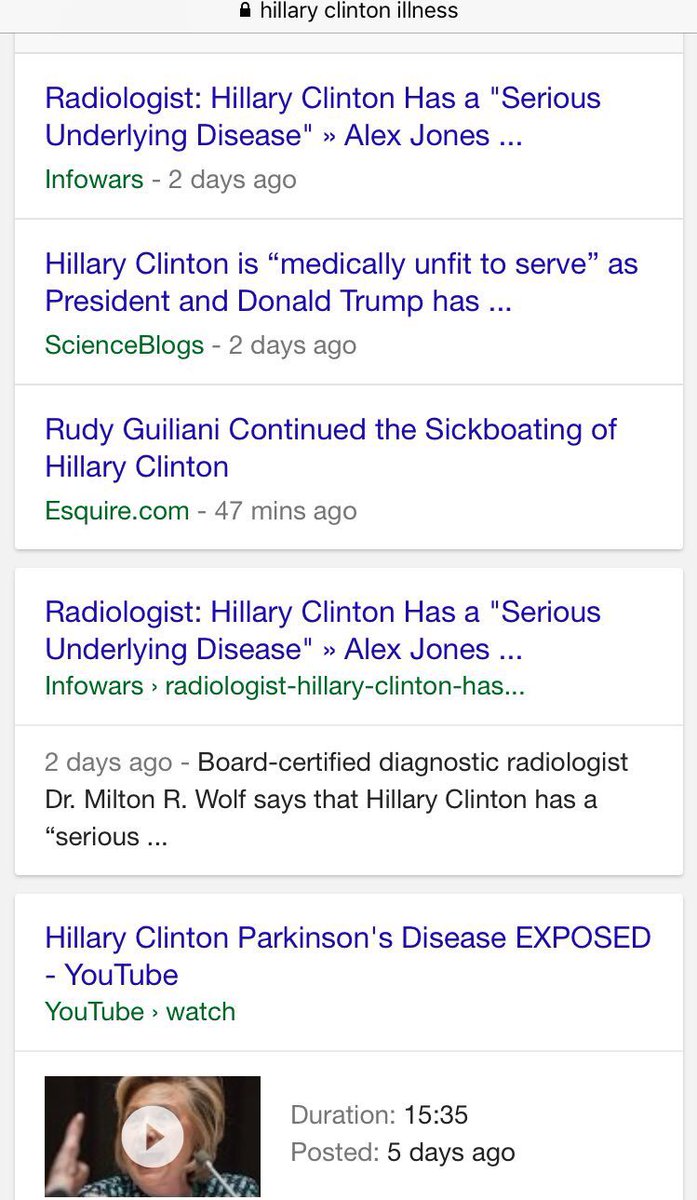 This is a Google failure. Conspiracy theories shouldn’t be listed first

As with every other presidential candidate in the past — including the youthful Barack Obama — questions about Clinton’s health are legitimate. But in today’s era of social media, sometimes the most important (that is, true) information doesn’t always rise to the top.

That leads us to today’s news and the fact that Farhad Manjoo, the influential New York Times tech columnist, has called on Google to figure out a way solve this issue of bogus information.

“Google should fix this. It shouldn’t give quarter to conspiracy theorists,” he tweeted.

The search engine did recently revamp its medical symptoms searches. But Google typically doesn’t like to fiddle around with search results, and the controversy is another reminder that health information can be among the most tricky things to research online.