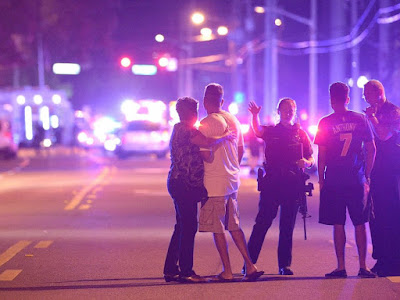 June 13, 2016 (Tony Cartalucci – LD) – A horrific mass shooting unfolded in Florida claiming the lives of at least 52 with scores more injured. The British Independent would report in its article, “Omar Mateen: Orlando gay club gunman identified by police,” that:

Police have identified the gunman in the mass shooting at a gay club in Florida as 29-year-old Omar Mateen, an American citizen whose parents are from Afghanistan.

Authorities in Orlando said they were investigating the shooting as an act of terrorism, as the death toll rose to 50 with a further 53 wounded.

At face value – it appears to be another senseless tragedy perpetrated by a “terrorist” inspired by militant groups the US claims to have been fighting for now nearly two decades. However the Independent reports another fact further down in the body of its article, claiming that:

ABC News reported he had been on police’s “radar”, though not subject to an investigation.

If this sounds like a familiar narrative, that’s because virtually every high-profile “terrorist attack” carried out in North America and Europe in recent years has been done so by suspects long under investigation by US, Canadian, and European law enforcement and intelligence agencies.

Two officials tell CNN that the FBI had investigated Mateen at some point for possibly having ties to or sympathizing with Islamic extremism. A law enforcement official said there were two cases opened involving Mateen but the probes didn’t result in enough evidence to charge him with anything.

In the past two weeks Mateen legally purchased a Glock pistol, found at the shooting scene, from a St. Lucie County area gun store, a law enforcement official said.

What CNN fails to mention is the long history the FBI has of taking “sympathizers” through a series of steps to acquire “enough evidence,” including posing as terrorists and providing suspects with weapons and plans for attacks precisely like the one that just unfolded in Florida.

To understand the implications of yet another high-profile terror attack involving a suspect already known to law enforcement agencies, one must examine previous examples of admittedly set up attacks “foiled” at the last moment by the FBI, as well as attacks that have been carried out by individuals tracked for years and even arrested multiple times by Western police and intelligence agencies only to be let go time and time again until finally carrying out “the big one.”

A terror suspect armed to the teeth storming a public place and killing scores is actually a very familiar script. The FBI wrote several such scripts in 2015 alone, including entrapping and arresting a mentally-ill suspect after providing him with an arsenal of deadly weapons almost identical to the arsenal recently employed in Flordia.

The Intercept would report in its article, “Another “Terror” Arrest; Another Mentally Ill Man, Armed by the FBI,” that:

U.S. law enforcement officials announced another terror arrest on Monday, after arming a mentally ill man and then charging him with having guns.

ABC News quoted a “senior federal official briefed on the arrest” as saying: “This is a very bad person arrested before he could do very bad things.”

But in a sting reminiscent of so many others conducted by the FBI since 9/11, Alexander Ciccolo, 23, “aka Ali Al Amriki,” was apparently a mentally ill man who was doing nothing more than ranting about violent jihad and talking (admittedly in frightening ways) about launching attacks—until he met an FBI informant. At that point, he started making shopping lists for weapons.

According to the affidavit, Ciccolo first talked to the FBI informant about attacking two bars and a police station. Later, he spoke of attacking a college campus with a homemade pressure-cooker bomb like the one used in the Boston Marathon terror attack; he also talked about using guns and a lot of ammo. Ciccolo, according to the affidavit, then “ordered the firearms from a confidential human source (“CHS”) working with the FBI.”

The list of weapons provided to the mentally-ill suspect by the FBI informant is shocking. Revealed in the official FBI affidavit (.pdf), the weapons included a 9mm Glock 17, a 10mm Glock 20, a .223 Colt AR-15 rifle, (referred to by the media as an “assault rifle”), and a 556 Sig Arms SG550 rifle (also often referred to as an assault rifle). Also included in the affidavit is the same hysterical rhetoric encouraged by FBI informants now evident in the recent actions of terror suspect Omar Mateen in Florida.

The FBI literally provided a mentally-ill man they helped plan a terrorist attack together with, an arsenal of deadly weapons – arresting him just before he committed his crime. The only factor that prevented the 2015 entrapment of Ciccolo from becoming a live Florida shooting-style attack was the fact that the FBI arrested Ciccolo before he carried out his planned attack – while those following Mateen did not arrest him.

The role of the FBI in Mateen obtaining his weapons will never be known since Mateen is now – conveniently – dead. Even if he purchased them “legally” at a gun store, it should be noted that in other FBI entrapment cases, suspects were encouraged to purchase weapons themselves, with the FBI arresting them only after they left gun stores with their newly acquired arsenal.

Agents said that on Tuesday and Wednesday Cornell met with the informant the final time to plan their trip to D.C. to execute their plan. He purchased two Armalite M-15 5.56 mm semi-automatic rifles Wednesday morning, along with 600 rounds of ammunition, and was arrested.

Cornell bought the rifles at the Point Blank gun store on Harrison Avenue in Colerain Township. He passed a background check and paid $1,900 in cash, $700 for each rifle and about $400 for the ammunition.

The gun store owner, John Dean, said FBI agents notified him that Cornell was going to come in to buy the guns about 10 minutes before he entered the store.

Dean said the agents told him to allow the purchase and agents would stop Cornell after he left the store.

What if agents didn’t stop him after he left the store? He had two semi-automatic rifles and 800 rounds of ammunition – more than enough to carry out a Florida shooting-style attack. Some may be immediately tempted to conclude that the FBI would never allow an attack they played a role in planning to go “live.” However, they would be wrong. 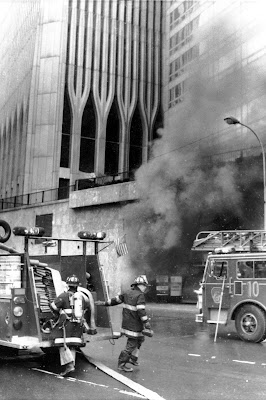 The FBI in fact was presiding over the terrorists who carried out the 1993 World Trade Center bombing. The role of the FBI leading up to the deadly attack would most likely have gone unreported had an FBI informant not taped his conversations with FBI agents after growing suspicious during the uncover operation. The New York Times in their article, “Tapes Depict Proposal to Thwart Bomb Used in Trade Center Blast,” reported:

Law-enforcement officials were told that terrorists were building a bomb that was eventually used to blow up the World Trade Center, and they planned to thwart the plotters by secretly substituting harmless powder for the explosives, an informer said after the blast.

The informer was to have helped the plotters build the bomb and supply the fake powder, but the plan was called off by an F.B.I. supervisor who had other ideas about how the informer, Emad A. Salem, should be used, the informer said.

The account, which is given in the transcript of hundreds of hours of tape recordings Mr. Salem secretly made of his talks with law-enforcement agents, portrays the authorities as in a far better position than previously known to foil the Feb. 26 bombing of New York City’s tallest towers. The explosion left six people dead, more than 1,000 injured and damages in excess of half a billion dollars.

The FBI and other US, Canadian, and European law enforcement and intelligence agencies “accidentally” failing to stop terror suspects they have long-known about and have even arrested multiple times has since become endemic. In recent years, virtually every suspect has either been known by such agencies beforehand, or has been involved in a history of crime and terrorism before carrying out their final acts of grand terrorism.

Such was the case in the various French attacks. Many from the network that carried out the French attacks were then directly involved in the Belgium attacks. To explain away the fact that virtually all the suspects had been within European security agencies’ grasp for years but were still able to carry out their deadly attacks – the Western media has attempted to cite a lack of resources.

In reality, what is playing out is an engineered strategy of tension using both the threat of terrorism and actual terrorism to create hysteria, fear, division, and ultimately obedience and capitulation across Western populations.

It should be remembered that Al Qaeda itself began as a US-Saudi joint venture to fight proxy warfare against the Soviet Union in Afghanistan where conventional Western forces could not go. It should also be pointed out that since then, Al Qaeda and its more recent affiliate, the self-proclaimed “Islamic State,” have enjoyed logistical support from the US and NATO for years in proxy wars ranging from Libya to Syria to Iraq and the frontiers of Iran, southern Russia, and western China.

More recently it has been admitted even within the Western press that the “Islamic State” is being resupplied and reinforced from NATO territory itself, with the UK Telegraph admitting in its article, “US-backed Syrian opposition forces surround Isil in key city and cut off main supply route,” that:

…Syrian opposition forces have completely surrounded the Islamic State-held stronghold of Manbij and cut off the group’s main route to the outside world…..

The loss of Manbij will be a huge loss to the group. It had been a waypoint on an Isil supply line between the Turkish border and the extremist group’s de facto capital, Raqqa.

Again, we see that while the US claims to fight the “Islamic State,” its NATO partner Turkey is quite literally the source of the terrorist organization’s fighting capacity, with US forces permanently stationed in Turkey for decades and Turkey having been a NATO member since the 1950s. Despite open acknowledgments that the “Islamic State” is operating out of Turkey, the US has used the presence of the terrorist organization inside Syria as a pretext for intervening in the war directly.

Were the US truly interested in stopping the “Islamic State,” it and its allies in Ankara would be easily able to wield maximum force within Turkey’s territory to cut the group off before it even reached Syrian territory.  That both Washington and Ankara are feigning an inexplicable inability to do this, and insist instead that the war must be fought inside Syria exposes the cynical nature with which the West uses – not fights – terrorism to further its geopolitical and domestic political agendas.

As special interests attempt to leverage this latest terrorist attack – all of these actual facts must be kept in mind to ground us to a reality Western politicians and media outlets will attempt to detach us from in the coming days and weeks.