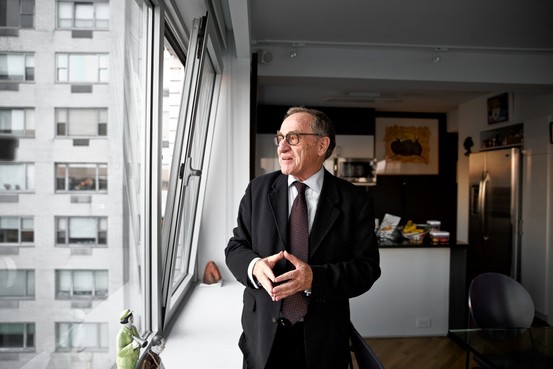 More than four years before underage sex claims against Alan Dershowitz turned up in a court document, a lawyer for his accuser sought to link the famed attorney to the Jeffrey Epstein sex-abuse scandal, according to court documents.

In  2010, a lawyer for alleged victims of Mr. Epstein described Mr. Dershowitz in court papers as a potential witness to sex abuses committed by Mr. Epstein, a money manager whom federal prosecutors suspected of abusing dozens of underage girls.

Mr. Dershowitz, who was friends with Mr. Epstein, had earlier helped him negotiate a controversial non-prosecution deal with federal prosecutors.

Bradley Edwards, a Florida lawyer who at the time was representing women in civil suits against Mr. Epstein, drew attention to an earlier deposition by a Miami man who worked for Mr. Epstein at the financier’s Palm Beach mansion.

That man, Alfredo Rodriguez, was employed as Mr. Epstein’s house manager in 2004 and 2005, according to court transcripts. He claimed in a 2009 deposition, taken in separate litigation, that Mr. Dershowitz visited Mr. Epstein’s Florida house “two or three” times over several months. Mr. Rodriguez said some of the same “young ladies” whom he had witnessed coming into Mr. Epstein’s mansion for purported “massages” were also at the house while Mr. Dershowitz was present, according to a transcript.

Mr. Dershowitz, in an interview with Law Blog on Friday, took issue with Mr. Rodriguez’s assertions. “Never once did I see a young, underage person or anybody who was arguably underage. I never saw any young girls. I never saw any crimes committed,” he said. Mr. Dershowitz said he “was never in the presence of any person who came to give Jeffrey a massage.”

Mr. Dershowitz, who is 76, told Law Blog that he recalled visiting Mr. Epstein’s Palm Beach home “maybe four times” in his life, including a week-long stay with his wife, children and grandchildren around 2005. He said Mr. Epstein had lent him the house for that visit and that he never ventured into “Jeffrey’s part of the house,” but kept to guest areas. During other visits, he said, he was “almost always in the company of legal-team members or serious adults.”

Mr. Edwards in 2010 said that Mr. Rodriguez’s deposition gave him the legal grounds to depose Mr. Dershowitz. But that deposition never happened.

Years later, Mr. Edwards and his co-counsel Paul Cassell would claim that Mr. Dershowitz, at Mr. Epstein’s urging, had sex with an underage woman identified in court papers as “Jane Doe #3″.

The claim — which Mr. Dershowitz has sworn under oath is false — surfaced 11 days ago in a motion filed by the two lawyers in a lawsuit against the federal government over the 2007 deal it struck with Mr. Epstein.

The agreement allowed Mr. Epstein to avoid federal prosecution. Messrs. Edwards and Cassell are seeking to invalidate it, claiming it was a sweetheart deal negotiated behind the backs of victims. As part of the agreement, Mr. Epstein pleaded guilty in 2008 to a state charge and served about 13 months in prison.

Shortly after he was deposed, Mr. Rodriguez landed in legal trouble himself when he tried to cash in on potentially important evidence he found at Mr. Epstein’s home — a journal containing names and numbers of dozens of possible sexual-abuse victims and other associates of Mr. Epstein’s. Instead of turning over the journal in response to a subpoena, as required by law, he tried to sell it for $50,000. In 2010, he was convicted of obstruction of justice and sentenced to 18 months with two years of supervised release. (An unrelated gun charge made him ineligible for a lighter sentence.)

Mr. Rodriguez died two weeks ago after a battle with cancer at the age of 60, according to his wife.

In court papers, the federal prosecutor in Florida who negotiated Mr. Epstein’s 2007 plea deal stated that had the government known about the journal sooner, it might have dealt with Mr. Epstein more harshly.

“I think there’s just something that doesn’t look quite right for Mr. Epstein’s house man to get a greater sentence for what he’s done than Mr. Epstein did for what he’s done, which is substantially worse,” Dave Lee Brannon, a public defender who represented Mr. Rodriguez, told the judge at his client’s sentencing hearing in 2010.

“Mr Epstein and the Government entered a federal Non-Prosecution Agreement in 2007,” Martin Weinberg, a lawyer for Mr. Epstein, told Law Blog on Friday. “Mr. Epstein has fully honored its terms and conditions and is not in anyway a party to this ongoing civil litigation.”