A Great Light Has Passed, Edgar Mitchell Was Much More Than An Astronaut SOTN Editor’s Note:
Edgar Mitchell was much more than a NASA astronaut. He was a great thinker and compassionate man.

Edgar Mitchell once visited a highly revered holy man from India. He proceeded to share his sublime and mystical experiences about his Moon-walking with the living saint. The response that he received from the enlightened master was this.

And so Edgar Mitchell was.  TRANSFORMED forever!

Perhaps like no other astronaut in NASA history, Edgar Mitchell went though a profound and lasting transformation after his visit to the Moon.  Upon his return to Earth, his entire life changed.  Not only was his Moon landing the last time he was ever to be launched into space, his pursuits from that point forward were oriented around sharing the highly mystical experiences that he had while, and after, walking on the lunar surface.

It was during his post Moon experience that Edgar began to integrate his newfound consciousness.  As he proceeded to take his own very personal spiritual journey back to the Godhead, he took many others with him.  His remarkable courage and perseverance in the face of much ridicule never seemed to deter his mission of peace.  In this way, he has served as a beacon of universal brotherhood and harmony.  ONENESS became his new middle name.

The following article conveys only a small part of the real Edgar Mitchell story. His Institute of Noetic Sciences is full of accounts of his personal transformation and other realizations which only occurred in the wake of his Moon experience.  There is perhaps no other man in modern history who has spoken and written on a subject that NASA would rather not publicize.  Mitchell also spent a good deal of time exposing the ongoing government coverup regarding alien visitations, to the chagrin of NASA administrators.

Edgar Mitchell spent the rest of his days sharing his unparalleled experiences about the true power and earthly effects of the Moon.  In so doing he raised the awareness that the Moon was no ordinary celestial body.  And, that it has always exerted an awesome force on Planet Earth and the affairs of men, well beyond what modern science has determined.

How to harness such a benevolent and mighty force became his lifelong mission.  Truly, the world has just lost a magnanimous soul and fervent advocate for world peace. Certainly Edgar Mitchell will now carry out his noble mission from his heavenly abode. May the Force be with him always! 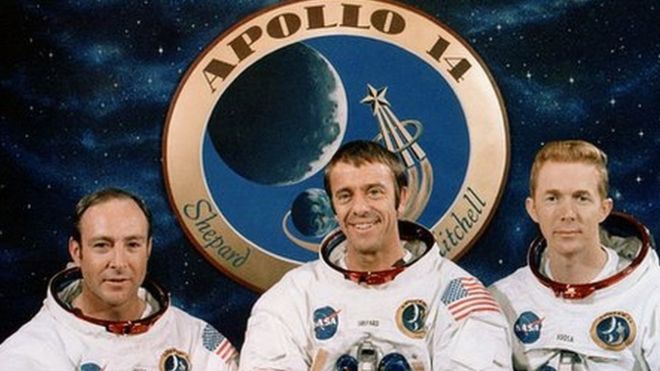 US astronaut Edgar Mitchell, who was the sixth man to walk on the Moon, has died aged 85.

Captain Mitchell passed away at a hospice in West Palm Beach, Florida, one day before the 45th anniversary of his Moon landing, his family said.

As part of the Apollo 14 mission in 1971, he spent more than nine hours on the Moon conducting experiments.

He said he had undergone an epiphany in space and in later life revealed a belief that aliens had visited Earth.

Mr Mitchell’s mission to the Moon was the fourth in the US Apollo series, and the first to follow the ill-fated Apollo 13 which aborted its attempt to land after an oxygen tank explosion.

Mr Mitchell and his crewmate, another Navy officer, Captain Alan Shepard, made it safely to the lunar surface. Their landing site was the Fra Mauro Highlands, a hilly area that was the target of the failed Apollo 13 mission.

During their 33 hours at the site, the two astronauts collected 45kg (94lb) of Moonrock for examination back on earth and completed the longest moonwalk in history.

Capt Shepard also hit a golf ball he had stowed onboard for the purpose, reporting later that it travelled “miles and miles and miles” in the low lunar gravity. He later estimated it travelled up to 400 yards (metres) – still considerably further than his average Earthbound drive. 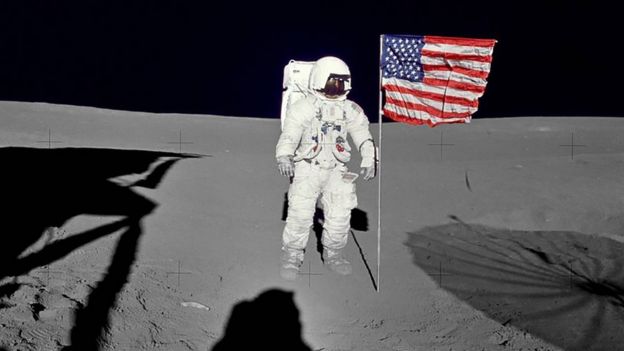 Mr. Mitchell brought home more than just Moonrock, telling reporters in the days after the mission that he said he had experienced an “epiphany” in space and returned with “an overwhelming sense of oneness, of connectedness”.

Years later he wrote in his autobiography: “It occurred to me that the molecules of my body and the molecules of the spacecraft itself were manufactured long ago in the furnace of one of the ancient stars that burned in the heavens about me.”

Mr Mitchell left Nasa in 1972 and set up the Institute of Noetic Sciences, which aimed to support “individual and collective transformation through consciousness research”.

In 1974, he described his lunar epiphany to the New York Times: “It was a sense of the Earth being in critical condition, a recognition of the massive insanity which had led man into deeper and deeper crises on the planet.

“Above all, I felt the need for a radical change in our culture. I knew we were replete with untapped intuitive and psychic forces which we must utilise if we were to survive, forces that Western society had programmed us to disregard.”

Mr Mitchell devoted much of his later life to studying the mind and unexplained phenomena. In 2008, he claimed that aliens had visited Earth and said he believed there was a government cover-up.

“I happen to have been privileged enough to be in on the fact that we’ve been visited on this planet and the UFO phenomena is real,” he said in an interview with Kerrang Radio.

“It’s been well covered up by all our governments for the last 60 years or so, but slowly it’s leaked out and some of us have been privileged to have been briefed on some of it.”

Asked about the astronaut’s unorthodox opinions, Nasa said diplomatically: “Dr Mitchell is a great American, but we do not share his opinions on this issue.”

Unlike his post-Nasa life, Mr Mitchell took a very traditional route to becoming an astronaut. He flew fighter jets for the Navy before becoming a test pilot – a profession from which many of the early Apollo crews were drawn.

He joined the astronaut corps in April 1966, five years before he went into space. Apollo 14 was his only spaceflight.

Of the 12 men who have set foot on the Moon, seven are still alive following Mr Mitchell’s death, including Buzz Aldrin, Neil Armstrong’s crewmate on the first mission in 1969.