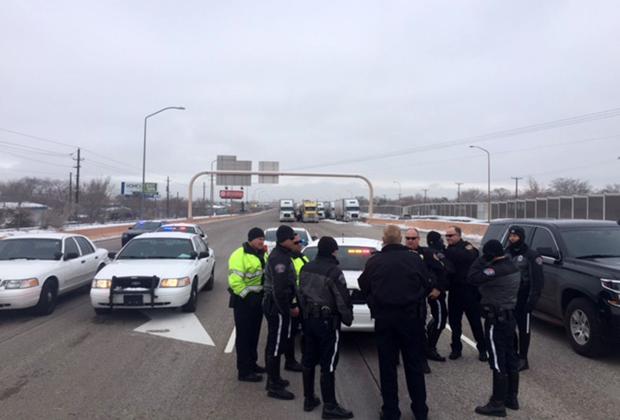 This photo provided by the Albuquerque Police Department shows a group of Albuquerque police officers preparing to reopen eastbound Interstate 40 in Albuquerque, N.M., on Monday. The interstate had been closed from Albuquerque to the Texas border due to icy, snow-packed conditions.

LUBBOCK, Texas • Dairy producers in West Texas and eastern New Mexico are continuing to assess how many animals died in the winter storm last weekend, but the number will probably climb to more than 30,000, an official with a dairy group said Thursday.

Texas Association of Dairymen executive director Darren Turley said an estimated 15,000 mature dairy cows died in the storm’s primary impact area — from Lubbock west to Muleshoe and north to Friona which is home to half of the state’s top-10 milk producing counties and produces 40 percent of the state’s milk.

The number of younger animals killed by Winter Storm Goliath in each state could be just as high as the mature cows, he said.

There will be less milk coming from the region for a while, Turley said,

The snow was just one part of Goliath. It was the wind that led to drifts as high as 14 feet, where many animals died. Wind will push animals into a fenced corner where they can suffocate in snow drifts.

The losses will affect production for about year, he said.

During the storm dairy employees and tanker trucks from reaching farms. Hundreds of loads of milk ready for processing were wasted. Some cows normally milked twice a day went almost two days without being milked, which dries up the cows’ milk supply, Turley said.

“The ripples from that are going to depend on how fast those animals’ milk production comes back,” Turley said.

The Texas producers are working with state environmental officials to find ways to dispose of the carcasses. Some counties are allowing producers to put carcasses in their landfills.

“It was unbelievable,” he said.