This is Why They Shut Down the LA School System

SOTN Editor’s Note:
The U.S. Government is now in the fear generation business practically 24/7.  Is there any mass murder, bombing or other scare that is not planned and coordinated, executed and covered up with the full knowledge and support of the government?  Really, can anyone think of a single terror event or fear-filled drama that doesn’t have  “Made by the U.S Gov’t” stamped on it?

San Bernardino Solved: A False Flag Within a False Flag — Patriots Versus Globalists

Whereas governments were first established to safeguard the citizenry and protect their property, they now serve the opposite function.  The plethora of government-sponsored false flag mass shootings and bombings clearly demonstrates the awesome amount of harm inflicted on the people.  Likewise, events like 9/11, the Oklahoma City bombing and firebombing of the Branch Davidian compound in Waco, Texas graphically illustrate how eager the government has been to implement such acts of terror, and then work tirelessly to cover them up.

Let’s face it — America has a real problem on its hands.  And it is likely to get much worse before its get better.  Shutting down the second largest school district in the nation because of a threat made from Germany basically means that it is now open season throughout the school systems of the whole nation.  The Feds can essentially shut down any school it wants based on a real or perceived threat.  Of course, they have already been staging mass shootings on college campuses and elementary schools alike.

All this predicament does is condition the American people to expect yet more violence and mayhem, especially in the already guarded school districts.  Various countries (who really do NOT like the U.S. Federal Government) all over the world would like to shut down the USA’s schools and malls, and everything in between.  How easy would it be for any cyber-based terrorist located anywhere on the planet to issue such threats … daily or weekly.

It does appears that government officials have been ordered to go along with this blatant fear promotion program.   There’s no question that doing so serves multiple agendas each one being critical toward the protection of the 1%.  The fear-generation and war-mongering industries which make up the Military-Industrial Complex and also serve the national security state are, after all, the most profitable in the land.   They also serve to perpetuate the groundless fear and anxiety that paralyzes the nation.

School systemwide closures certainly fit into this agenda, particularly by conditioning the children from such a young age.  Taking place so close in time and physical proximity to the San Bernardino false flag mass shooting only piles on an already heightened atmosphere.  That LA was chosen, once again, to stage another fabricated drama only solidifies the place that California occupies on the globalist cabal’s agenda.  It’s where the nation’s most strict gun laws currently exist.

Obama’s #1 MISSION: Take Away The Guns

Clearly the great state of California figures quite prominently into their NWO plans to strip Americans of their Second Amendment right to bear arms.  Just as they staged the measles outbreak scare at Disneyland in order to pass the draconian vaccine law, they have engineered a number of shootings and gun incidents throughout California (remember Officer Christopher Dorner).  In this fashion are they confident that globalist Jerry Brown and his practically Democratic supermajority in the state legislature can be compelled to pass any gun law they push for.  Once gun rights are sufficiently eroded, the 2nd Amendment will have been effectively nullified without even having been legislatively repealed.

Is a forced vaccination agenda behind the measles hysteria?

The LA Times new report below shows just how dramatic the Maintream Media has become in hyping so many threats that are thrown at the American people on a daily basis. In this highly dubious capacity the MSM is now working for the rogue U.S. Federal Government more than they are working for their shareholders.

Isn’t that called fascism?  Or maybe it’s just an American variant of totalitarianism.

The way to maintain a fasict state is through fear.  Totalitarian governments have always sustained themselves with the negative energy that is produced by the populace, as a result of terrorizing governance.  It’s worked that way since time immemorial, so they know it works like a charm. 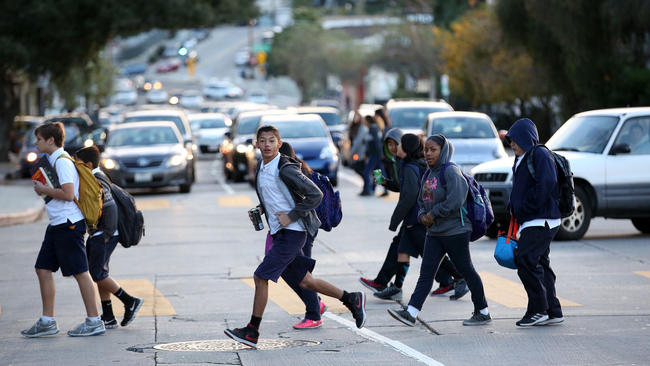 All campuses were closed Tuesday morning after receiving what officials have called a “credible threat” of violence involving backpacks and packages left at campuses.

Law enforcement sources said that the person who made the threats could have masked their location.

Authorities said they plan a search operation of all of LAUSD’s more than 900 schools, including charter schools and special education centers. The nation’s second-largest school district, LAUSD has more than 700,000 students. 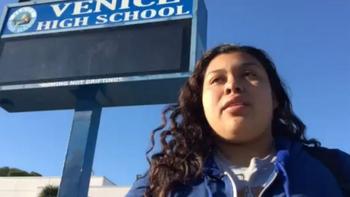 Venice High School senior Lessly Ramirez, 17, talks about the closure of her school.

The move comes less than two weeks after two shooters killed 14 people in San Bernardino in what was the deadliest terrorist attack on U.S. soil since Sept. 11, 2001.

“We get threats all the time. This was a rare threat.”
– LAUSD Supt. Ramon Cortines

Fearing for the safety of schools and students, Cortines said he couldn’t take a chance, so he asked police to search all campuses, adult school and early-education centers.

Officials said the threat came in electronic form and was made to numerous but unspecified campuses. As a result, they made the decision to close all campuses for the day.

“The threat is still being analyzed,” he said. “We have chosen to close our schools today until we can be sure our campuses are safe.”

Students who already arrived at school will be supervised until parents can pick them up, officials said. LAUSD ordered parents and guardians to bring identification with them.

Brian Levin, a terror expert at Cal State San Bernardino, said the closure was unprecedented and could embolden others to make future threats.

“In today’s environment it makes sense to err on the side of safety, even though they almost always are hoaxes,” he said.

New York authorities were also responding to a threat made to city schools, but said it was not credible and that they were concerned about overreacting.

“These threats are made to promote fear…we can not allow us to raise the levels of fear,” New York City Police Commissioner William Bratton tweeted.

He added that the agency was working closely with the FBI and the LAPD.

Zayda Hernandez pulled up to Mayberry Elementary in Echo Park shortly after 7:30 a.m. with her 6-year-old son, Matthew Alvarez, bundled up in the back seat in a coat and SpongeBob stocking cap.

He hadn’t been feeling well, so she has been urging him to just make it through the last few days of school before winter break.

She pulled up to see paper signs with purple writing attached to the closed chain-link fence outside the school: “No school today.” “Hoy no hay escuela.”

“No school!” she said, rolling down her window, shaking her head.

She was driving from her home near Chinatown on Tuesday morning when she heard on Spanish radio 107.5 that schools would be closed. But it was so late and there was a private school she knew of that was open, so she wanted to check just to be sure.

“I pulled up and thought, ‘There’s no traffic so maybe it’s true.’ ”

She showed an alert she got on her smartphone at 7:22 a.m. from Mayberry administrators saying that at 7:10 a.m., the superintendent decided to close schools. “Do not send your child to school. Please watch the news for further updates,” it read.

Hernandez was not happy about the closure because she has to go to work. But her son, a kindergartener, grinned.

Cortines said a statement will be issued later Tuesday, providing an update on the investigation.

The “rare” threat message was made to students at many schools, he said.

“Nothing is [more] important to us than the safety of our kids, especially those that are coming to and from school that haven’t been notified yet,” he said.

LAUSD Board President Steve Zimmer urged families not to send their children to schools and employees to stay home.

“We are taking this action in an abundance of caution to make sure that every child in L.A. Unified School District and every employee is absolutely safe,” Villegas said

If students already were dropped off Tuesday morning at LAUSD campuses, parents must pick up their children at the schools’ reunion gates.

“I want to be very clear: We need cooperation of the whole of Los Angeles today,” Zimmer said, pleading for employers to show patience for parents looking to find care for their children.

As a result of the closures, Metro announced that students with a valid student ID can ride buses and trains for free until noon.