The Solution to the Childhood Vaccination Enigma 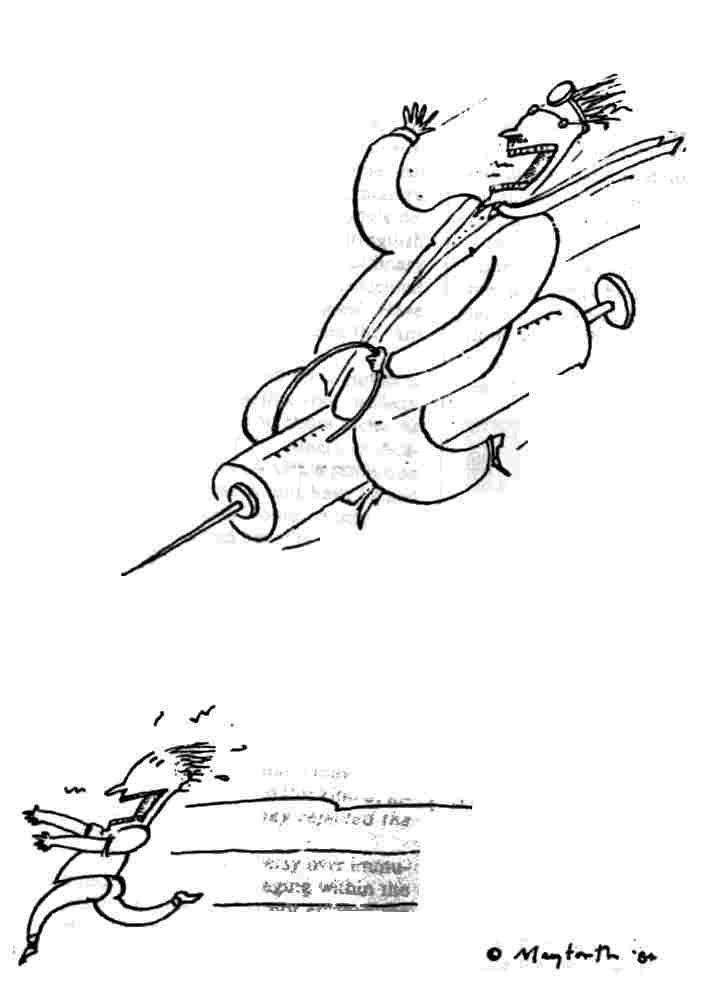 Disclaimer: Let me be perfectly clear childhood vaccines for the Measles, Mumps or the Chicken Pox are dangerous. I would leave the country before I would let my child be vaccinated. How to Resist Pediatrician Pro Vaccination Tactics

Have you been following this vaccination controversy? Is there anyone else out there that realizes there is something wrong with this picture? There is no money, power or greed conspiracy here.

I have no doubt that Brown, along with every California legislator, who voted for SB277 is aware of the highest integrity scientific research that has demonstrated that vaccines are dangerous, as well as potentially lethal. [1]

I am also convinced that Brown, along with every California legislator, read the open letter by Tetyana Obukhanych (Immunologist), PhD. that skillfully deconstructs the many false and fabricated arguments that are advanced by the pharmaceutical companies and the U.S Federal Government, and that everyone one of them are aware of the overwhelming evidence that the risk from the vaccine is greater than the risk from childhood diseases.

America survived quite well until the 1980s without Mandated Vaccinations for Children and Adults
I was born in the 40s and the only vaccines given to children at the time were polio and tetanus. I grew up with the reality of mumps, measles and the chicken pox and survived the usual childhood illnesses without a problem as did many of my friends. I believe the immunologists and the when they say that these childhood infections actual helped my immune systems. Even the CDC will admit that “the first time a child is infected with a specific antigen (say measles virus), the immune system produces antibodies designed to fight it.” [3]

I am in excellent health with no minor or major diseases past or present. Who is healthier today, people born before mass vaccinations for childhood diseases or after?

Evidence
So when the California Senate refused to consider authoritative scientific evidence which categorically proves the dangerous vaccine side effects on schoolchildren and their undeserved reputation for having eliminated contagious diseases in the West, you have to ask yourself why?

Pro-Vaxxers are everywhere. Consistently ignoring logic, science, statistics and the obvious; the vaccines are without a doubt more dangerous than the diseases they are meant to eliminate. [pub med 1200]

Is This a Conspiracy by BIG Pharma?
Answer: No
The latest misinformation circulating around vaccines is the dead doctors.

The opposition in California has been defeated and the Supreme Court Refused to Challenge New York’s Vaccine Requirements for Children.

There is absolutely no danger the public is going to wake up tomorrow and go back to letting their kids get childhood diseases.

Despite the overwhelming evidence that the vaccines are not safe, the vast majority of the politicians and the public are in favor of mandatory vaccination.

Why bother to kill anyone? This makes no sense.

I don’t know why big Pharma is murdering cutting-edge doctors but it’s not to keep our leaders and the public from knowing how bad vaccines is for our health. They already know!

What about following the Money?

I don’t like being in a position defending the “evil” pharmaceutical industry but the drug company’s role in getting mandatory vaccines passed makes no cents.

Fact: The Sacramento Bee is reporting that State lawmakers behind bill SB277 have ties to the makers of vaccines.

Fact: Pharmaceutical companies and their trade groups gave current members of the Legislature more than $2 million. Nine of the top 20 recipients of these funds are either members of the Senate health committee, or leaders who could influence the outcome of the bill, as well as push it through to law.

Fact: The pharmaceutical companies could have saved nearly $3 million during the 2013-2014 legislative session when they lobbied to sway the outcome of SB277. The lobbyist accomplished only one thing; to convince the Anti-Vaxxers the mandatory vaccine legislation was about Big Pharma’s profits, there was never a danger the bill would not pass.

Big Pharma didn’t get to be BIG if they can’t figure out the public will ignore logic, science, statistics and the obvious; the vaccines are without a doubt more dangerous than the diseases they are meant to eliminate.

Pharma’s efforts to keep the vaccine hoax alive is costing them a fortune and they will never recoup these expenses by giving away government funded “free” shots to the public not to mention the public relations nightmare when the Vaccine courts pay out millions dealing with the children who are harmed from being injected with aluminum, formaldehyde, Polysorbate 80 and numerous other harmful chemicals into their bodies. [4]

A Big Pharma profits conspiracy is everywhere in the vaccine world. Vaxxers, Anti-Vaxxers, politicians and the public are positive that corporate greed, in this case Big Pharma greed, and political corruption are undermining America, Pigs at the Trough, Arianna Huffington. [Appendix A]

We are conditioned at birth to believe that everything is about money, power, greed and corruption. Therefore I am surprised the Vaxxers don’t see an inconsistency in their logic. They would have us believe that somehow, somewhere, in some Big Pharma boardroom, pharmaceutical executives that historically ignore their ethics and morals to make a profit, all of the sudden want to save lives.

Economically speaking, if mandatory vaccines were about profits, then Big Pharma would be against them. Let’s take a look at these profits from two different perspectives. First, are vaccines as profitable as other Big Pharma endeavors? And second, if Big Pharma execs were truly immoral and corrupt, would selling vaccines actually be the best business strategy?

Revenues for pharmaceuticals will exceed $1 trillion dollars by 2013. [a , IMS, the top pharmaceutical market analysis firm]. According to the World Health Organization, the estimated 2013 global revenues for vaccines is around $24 billion or around 1.82% of their total expected revenue. Medical device revenue is close to 320 billion. Vaccines generate about $10.5 billion in “net profits,” or about 43.8% of revenue. Most non-vaccine pharmaceuticals generate about $11.1 billion in net profit, or 46.3%, from the same revenue–thus, vaccines produce around 5% less profits than do other pharmaceuticals. Let’s see which product will the greedy Pharma execs spend millions to lobby for, medical devices or vaccines?

Ask yourself what you would develop if you were Big Pharma, Lipitor, probably the #1 drug in revenues ever, with over $10 billion in worldwide sales in 2011 or a vaccines to eradicate a childhood diseases?

You don’t need a degree from an Austrian school of economics because even a child understands that Big Pharma can make just as much, actually more money, developing other products that don’t require massive expensive PR campaigns and a Vaccine Court to compensate the thousands of vaccine-injured victims worldwide.

Is mandatory vaccination being used as another one of those “hammers”, in order to elicit compliance from citizens and take away our freedoms?
Answer: No

Is this a Conspiracy about Depopulation?
Answer: No

Yes Bill Gates admits vaccines are used for depopulation and the promoted so-called “pandemics,” West Nile, SARS, bird flu, Swine Flu, Ebola, are definitely an extended sales pitch for vaccines. But the public doesn’t need the CDC and the World Health Organization or the forced immunization clause in the Patriot Act to convince them that stepping up, rolling up their sleeves, and submitting to shots containing germs and toxic chemicals is the most natural and wise action possible, they already believe it. Remember the last bird flu hoax and Tamiflu. Any hint of an outbreak the fools will rush down to get their shot.

A shot based on Genome sequencing. Genome sequencing is a biotechnology that allows doctors to tailor medical treatments to an individual’s genetic profile: “You are here for your shot. Worried about the Bird Flu, of course sit here, roll up your sleeve, oh, sorry you died. Well, I guess it was too late for you; next time get here sooner.”

I can’t believe Big Pharma cares about us and a depopulation motive doesn’t fly so for now I will have to conclude we just don’t know why they are promoting vaccines, but it isn’t about money.

So what’s left?
Vaccines, like much of our medical science, represents progress and satisfies our need to prove that civilized humans are superior to the indigenous peoples (the savages) and animals because we are able to conquer our enemy, Nature.

The indigenous populations knew Nature was not ‘wild’ and hostile but was a benevolent friend. [5] Since the end of the “dark age” man has attempted to divorce himself from Nature to the detriment of all creation.

Our view is that nature is our enemy and needs to be conquered. Notice when the media reports on natural disasters they anthropomorphize, the killer hurricane, flood or earthquake:

When we develop a vaccine to conquer disease we are using our opposing thumb to prove that we don’t have to live by the laws of nature. We are superior to the animals and savages because we don’t urinate and defecate outside and have vaccines, doctors and hospitals when we get sick.

Vaccines are part of our collective self-esteem and out-sized ego and help to justify our existence. Without medicine, in this case a vaccine then the only real difference between us and the indigenous peoples (the savages) and the animals is that we have indoor plumbing and toilet paper.

Consciously or subconsciously just about everyone promoting mandatory vaccinations believes that the civilized human race is the most important species on the planet and it is our duty to use our opposing thumb to conquer Mother Earth.

[2] NURSE WHISTLEBLOWER: Serious Vaccine Damage Happening To Infants Routinely In Hospitals Autism was virtually non-existent. 86 Research Papers Supporting the Vaccine/Autism Link and the U.S. Media Blackout: Italian Courts Rule Vaccines Cause AutismThere is no question autism rates are skyrocketing. Today one in 50 children are now autistic. Autism in the 1980s was such a rare condition professors in medical schools advised their students that they would most likely never see a case in their professional lifetime. Vaccines contain aluminum and mercury, both neurotoxins, and no one has yet proven they are safe as adjuvants. The recent claims of fraud at the CDC over autism rates linked to vaccinations raise serious questions about the integrity of government scientists promoting vaccinations.

[3] From the CDC website Immunity Protects us From Disease

Immunity is the body’s way of preventing disease. Children are born with an immune system composed of cells, glands, organs, and fluids located throughout the body. The immune system recognizes germs that enter the body as “foreign invaders” (called antigens) and produces proteins called antibodies to fight them.

It would be nice if there were a way to give children immunity to a disease without their having to get sick first.

[4] Pharma doesn’t give out free shots. Those “free” shots are purchased by the government and channelled through grant-funded programs to targeted groups. Pharma doesn’t pay anything for causing harm by vaccines and cannot be sued by victims. Instead, any compensation paid to victims through the truly unlawful Vaccine Court comes out of a tax payer funded account ($.75 per vax; MMR, for example, is a triple vax and would thus generate $2.25 in compensation funding). It is very interesting to note that there has never been a public accounting of all the funds collected by this fund, and it appears this funding is used as well to pay down debt on treasuries in addition to paying off victims — $3.5 billion to date. All other drugs (that is, drugs for which manufacturers are liable for harm caused by them) have a line in their business plans for massive payouts to victims of harm, but not vaccines. All profit is free and clear,

[5] Then, by a twist of organized religious dogma, many began to think humans are the greatest and most important part of creation and they saw Nature as ‘fallen’ and sinful.