Is the Fed Preparing to Topple the US Dollar? 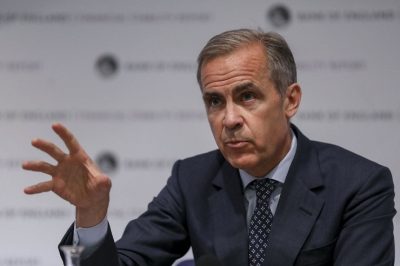 Unusual remarks and actions by the outgoing head of the Bank of England and other central banking insiders strongly suggest that there is a very ugly scenario in the works to end the role of the US dollar as world reserve currency. In the process, this would involve that the Fed deliberately triggers a dramatic economic depression. If this scenario is actually deployed in coming months, Donald Trump will go down in history books as the second Herbert Hoover, and the world economy will be pushed into the worst collapse since the 1930s. Here are some elements worth considering.

“…a destabilising asymmetry at the heart of the IMFS (International Monetary and Financial System) is growing. While the world economy is being reordered, the US dollar remains as important as when Bretton Woods collapsed.” He states bluntly, “…In the longer term, we need to change the game…Risks are building, and they are structural.”

What he then goes on to outline is a remarkably detailed blueprint for global central bank transformation of the dollar order, a revolutionary shift.

Carney discusses the fact that China as the world leading trading nation is the obvious candidate to replace the dollar as leading reserve, however, he notes,

“…for the Renminbi to become a truly global currency, much more is required. Moreover, history teaches that the transition to a new global reserve currency may not proceed smoothly.”

He indicates that means it often needs wars or depressions, as he cites the role of World War I forcing out sterling in favor of the US dollar. What Carney finds more immediate is a new IMF-based monetary system to replace the dominant role of the dollar. Carney declares,

“While the rise of the Renminbi may over time provide a second best solution to the current problems with the IMFS, first best would be to build a multipolar system. The main advantage of a multipolar IMFS is diversification… “ He adds, “… When change comes, it shouldn’t be to swap one currency hegemon for another. Any unipolar system is unsuited to a multi-polar world… In other words he says, “Sorry, Beijing, you must wait.”

The Bank of England Governor proposes in effect that the IMF, with its multi-currency Special Drawing Rights (SDR), a basket of five currencies—dollar, Pound, Yen, Euro and now Renminbi—should play the central role creating a new monetary system:

“The IMF should play a central role in informing both domestic and cross border policies. … Pooling resources at the IMF, and thereby distributing the costs across all 189 member countries…”

For that to work he proposes raising the IMF SDR funds triple to $3 trillions as the core of a new monetary system.

Then Carney proposes that the IMF oversee creation of a new payments infrastructure based on an international “stablecoin.” Referring to the private Libra, he clearly states a “new Synthetic Hegemonic Currency (SHC) would be best provided by the public sector, perhaps through a network of central bank digital currencies.” Note that Carney, a former Goldman Sachs banker, is mentioned as a leading candidate to replace Christine Lagarde as IMF head. Is his speech open admission of what is being planned by the world’s leading central bankers as the next step to a world currency and global economic control? Let’s look further.

The Carney speech, when deciphered from its central bank language, gives us for the first time a clear roadmap where the powers that control world central banking would like to take us. The world reserve role of the US dollar must end; it must be replaced by some form of IMF SDRs as basis for a multi-currency reserve. That in turn would ultimately be based on digital money, so-called block chain currencies. Such currencies, make no mistake, would be completely controlled by central bank authorities and the IMF. That would require their often-proposed elimination of all cash in favor of digital money where every cent we spend can be monitored by the state. This cashless society would also set the stage for the next great financial crisis and the confiscation by governments of ordinary citizens’ bank deposits under new “bank bail-in” laws now on the books since 2014 in every major industrial country including the EU and USA.

The IMF is fully behind the turn to global blockchain digital currencies and use of SDR to replace the dominant US dollar. In a little-noticed speech in November 14, 2018, IMF chief Lagarde strongly indicated that the IMF was behind central bank digital currencies as well as cashless societies. She noted very carefully,

“I believe we should consider the possibility to issue digital currency. There may be a role for the state to supply money to the digital economy.” She added, “A new wind is blowing, that of digitalization…What role will remain for cash in this digital world? … demand for cash is decreasing—as shown in recent IMF work. And in ten, twenty, thirty years, who will still be exchanging pieces of paper?”

The introduction of this central bankers’ new digital currency world will require, as Carney suggests, dramatic upheavals of the status quo, upheavals that would lead to the end of the dominant role of the US dollar since the 1944 Bretton Woods agreement. As that dollar reserve currency role is a pillar of American power in the world, for that to happen would require nothing short of catastrophe. Is this in fact what the Federal Reserve is quietly planning with its money policies?

A remarkable hint of what might be in the works came in an OpEd by the person who until 2018 was the very important President of the New York Federal Reserve Bank, Bill Dudley, who like Mark Carney is a senior Goldman Sachs alumnus. Dudley is no minor actor in the central bankers’ world. Until last year he also was a member of the Bank for International Settlements Board of Directors and chaired the BIS Committee on Payment Settlement Systems and the Committee on the Global Financial System.

Dudley, pointing to the Trump trade war policies and economic dangers of same, then issues the following rare undiplomatic declaration:

“Trump’s re-election arguably presents a threat to the U.S. and global economy, to the Fed’s independence and its ability to achieve its employment and inflation objectives. If the goal of monetary policy is to achieve the best long-term economic outcome, then Fed officials should consider how their decisions will affect the political outcome in 2020.”

While it shocked many, Dudley is merely making public what the Fed has done since its creation in 1913 — influence the course of world and US politics stealthily behind the cover of “neutral” monetary policies. Dudley suggests not “Russian interference” but rather Fed interference.

The Fed could easily tip the US into crisis. The debt levels of the US economy are at record high levels for private households, Federal government, and US corporate debt. Most US corporations have used growing debt, well over $9 trillion, to make stock buybacks rather than invest in new plant and equipment, fueling an unprecedented bubble in the S&P stocks. The rising stocks are not a sign of economic health but of a dangerous speculative bubble vulnerable to collapse.

Were the Fed now to resume rate rises and continue its less-publicized Quantitative Tightening into 2020, a domino-style series of debt defaults, corporate bankruptcies, home mortgage foreclosures, default on car loans and student loans could quickly make a second Trump Presidency in 2020 more than doubtful. However that would be no grounds for the rest of the world opposed to Trump policies to cheer. It would also trigger collapse in major emerging market countries who have borrowed hundreds of billions denominated in US dollars, including Chinese state companies, Turkey, Argentina, Brazil to name a few. EU banks from Italy to Germany to France would fail.

If this Dudley scenario comes to pass in 2020 or not, only the key central bank actors know for sure. It is clear that, after almost eleven years since the 2008 global financial meltdown, the unprecedented central bank zero interest rate policies in the EU and until recently the US, have fueled creation of what some call an “everything bubble”, not only in stocks, in corporate and public bonds, in home prices. Is a new Fed intervention to raise rates and tighten credit the event– the deliberate central bank rupturing of this inflated bubble using the excuse of the Trump danger to the world economy– that Carney has in mind when he says, “transition to a new global reserve currency may not proceed smoothly,”? Let us hope not. The coming months will tell.

F. William Engdahl is strategic risk consultant and lecturer, he holds a degree in politics from Princeton University and is a best-selling author on oil and geopolitics, exclusively for the online magazine “New Eastern Outlook” where this article was originally published. He is a frequent contributor to Global Research.