Market experts weigh in on what the market volatility says about 2019 from CNBC.

Stocks plunged again on Friday, sending the Dow Jones Industrial Average to its worst week since the financial crisis in 2008, down nearly 7 percent. The Nasdaq Composite Index closed in a bear market and the S&P 500 was on the brink of one itself, down nearly 18 percent from its record earlier this year.

The Federal Reserve’s rate hike on Wednesday drove the losses this week and fears of an extended government shutdown only added to the pain on Friday.

The Dow Jones Industrial Average fell 414.23 points to finish at 22,445.37 in turbulent trading that sent the blue-chip index up as much as 300 points earlier in the day, only to trade back in negative territory less than one hour later. The initial rally upward on Friday came as Federal Reserve Bank of New York President John Williams told CNBC that the central bank could reassess its interest rate policy and balance sheet reduction in the new year if the economy slows.

But those gains slowly disappeared as investors used that short-term pop as a chance to sell more. The broader S&P 500 fell 2.1 percent on Friday to close at 2,416.58, while the tech-heavy Nasdaq Composite shed 2.99 percent to 6,332.99 with big losses in technology stocks including Facebook, Amazon and Apple.

Stocks accelerated to their lows after President Donald Trump’s trade adviser, Peter Navarro, told Nikkei that it would be “difficult”for the U.S. and China to arrive at a permanent economic agreement after a 90-day ceasefire in the trade tensions.

Here’s a tally of the carnage:

The selling had conviction. More than 12 billion shares changed hands on U.S. exchanges on Friday, the heaviest volume in at least two years. The expiration of options also added to the volume.

“The message people should take home, especially if there’s a government shutdown, is that longer term, the prospects for equities are not good,” said Komal Sri-Kumar, president of Sri-Kumar Global Strategies. “There are lots of signs now suggesting that we may be looking at a recession. I would say that the risk here is that a whole lot of confluence is taking place: The trade was is not going to end soon, and the Fed totally misjudged the market in suggesting two more rate hikes next year.”

Stocks initially caught an early bid Friday morning after New York Fed President Williams said the central bank was listening to the market, and could re-evaluate its outlook for two rate hikes next year.

“We are listening, there are risks to that outlook that maybe the economy will slow further,” Williams told Steve Liesman on CNBC’s “Squawk on the Street” Friday.

“What we’re going to be doing going into next year is re-assessing our views on the economy, listening to not only markets but everybody that we talk to, looking at all the data and being ready to reassess and re-evaluate our views,” he said. 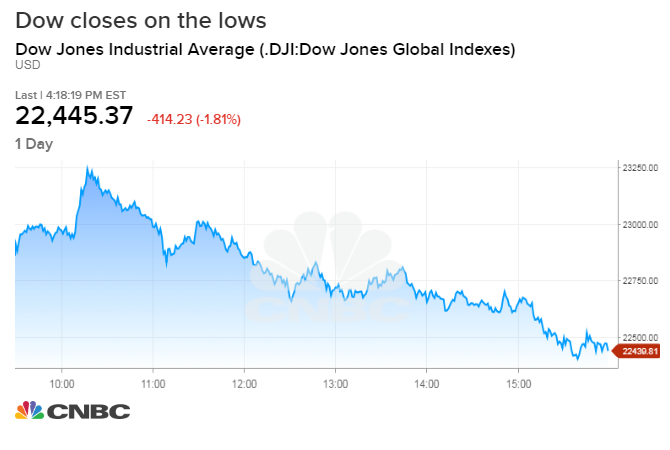 The Fed’s decision to raise the benchmark overnight lending rate by one quarter point on Wednesday triggered a new wave of selling across Wall Street earlier in the week. That move was widely expected by markets but investors appeared to be taken off guard by Fed Chairman Jerome Powell’s comments that the central bank was satisfied with its current path to reduce the balance sheet with no plans to change it.

The Fed currently is allowing $50 billion a month to run off its massive debt balance sheet as its securities mature, tightening financial conditions. The balance sheet is mostly a collection of bonds the central bank purchased to vitalize the economy during and after the financial crisis.

Sentiment was dampened Friday after President Donald Trumpaggravated fears of a government shutdown after tweeting:

“The Democrats, whose votes we need in the Senate, will probably vote against Border Security and the Wall even though they know it is DESPERATELY NEEDED. If the Dems vote no, there will be a shutdown that will last for a very long time. People don’t want Open Borders and Crime!”

The Democrats, whose votes we need in the Senate, will probably vote against Border Security and the Wall even though they know it is DESPERATELY NEEDED. If the Dems vote no, there will be a shutdown that will last for a very long time. People don’t want Open Borders and Crime!

Later on Thursday, the House passed a temporary spending bill with more than $5 billion for Trump’s border wall — an inclusion which will likely impede its ability to clear the Senate. The Senate had unanimously approved a bill Wednesday night to keep the government running through Feb. 8 — without border wall money.

However, Trump later told reporters on Friday that there is a very good chance the House funding bill will not pass in the Senate and that the administration is prepared for a long shutdown.

Both House Minority Leader Nancy Pelosi and Senate Minority Leader Chuck Schumer have flatly said congressional Democrats will not approve wall money. As Republicans need Democratic votes to pass spending legislation in the Senate, a partial shutdown is all but assured if the GOP insists on funding for the barrier.

Technology and financial stocks were among the biggest losers on Friday.