Fires in California were geoengineered.

Anomaly of fires. Selectivity of fires. The houses that allegedly caught from the forest fires burned to the fallen, but the forests stand. Controlled Weapons – DEW. Smart Meters Smart Energy Meters. How can climatologists fire the house and not its surroundings?

Mainstream media, not only in the US, but around the world, is trying to keep the impression that California is a natural forest fire, and that its extraordinary strength and scope are apparently caused, like other world “natural” last-ditch disasters, by the changes in the planet’s climate . Of course it’s a lie like CO2-drive global warming is.

All “natural” disasters of recent years (“forest” fires, floods, landslides, earthquakes, tsunamis, nuclear disasters, etc.) took place under the baton of geoengineering climate-fighting weapons. Scientists – geo-engineers – Climate-meteorological / climatic weapons controllers are the instrument of elites that deliberately organize these disasters to achieve their various goals, and there is no crime to stop them.

There is all the evidence that the official media will never inform as long as they are ruled by those elites. They will keep silent about them as long as possible, and if it does not work, the evidence and its bearers will try to discredit them by all means. But ordinary people still share this information on the Internet, and it seems that the credibility of the “official” media for the past year has dropped and is steadily declining.

Documents (in English) are a lot to do with, even pictures directly proving the effects of DEW. You can find the best summaries of photos, videos, and comments on the State of the Nation Alternative News and The Millennium Report, and many more. (I do not make direct links because access to some alternative sites via the link / bookmark is currently being monitored / blocked by elite / google, and you might indicate that the site does not exist or warn it is dangerous. But they can be easily found by the search engine.)

So I’m going to have some pictures today to get an idea and maybe get some more information.

At least one link to an article with photographic documentation: Evidence that California is under the DEW weapon attack:  http://stateofthenation2012.com/?p=108152

The strangest fire of all times – different anomalies.

1. Selectivity. The most striking feature is the selectivity of the fires. As the photographs show, the fires were able to pick their targets exactly. The houses are destroyed in the foundations (8,000 houses at all), but the trees / forests in the neighborhood remain intact, even in close proximity. How come when the houses are being ignited by a forest fire? See satellite imagery below: 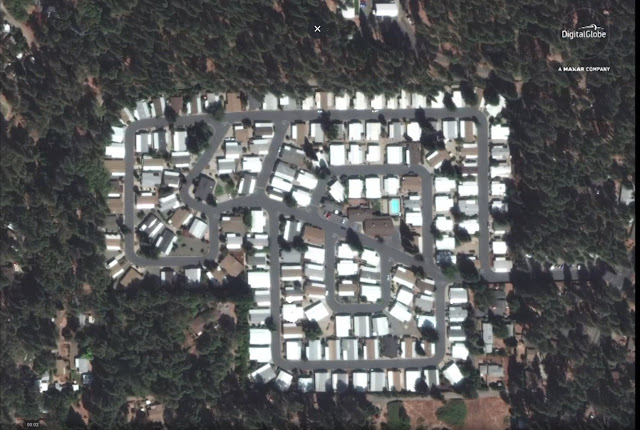 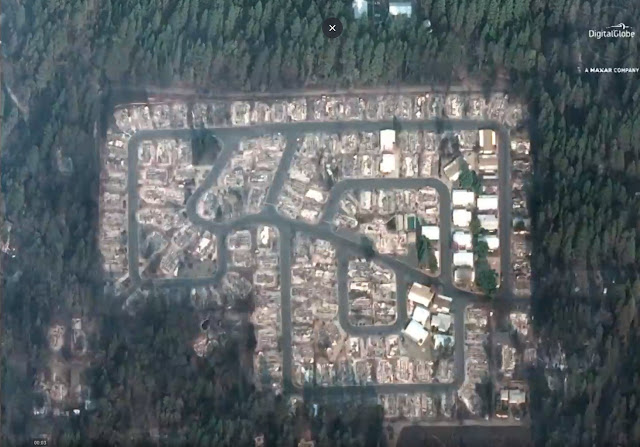 Picture: Paradise after fire – houses destroyed in the foundations, the forest stands. 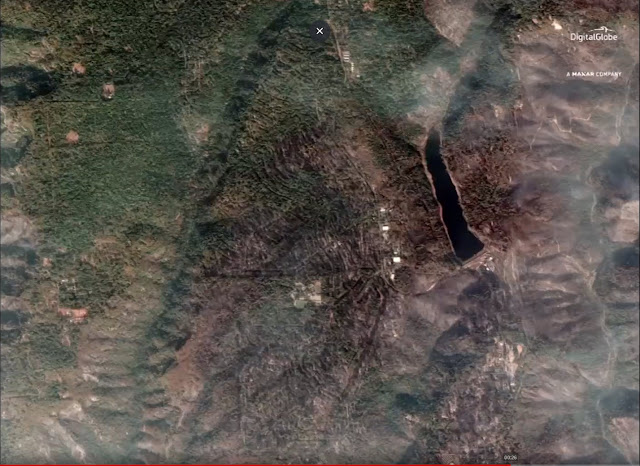 The images above come from the video https://youtu.be/323UpVNryYY  (which is google deleted, wherever they appear (they also have News.cz,  https://www.novinky.cz/zahranicni/amerika/490089-ridic- bus-to-riskl-and-out-of-mordor-two-tens-skolaku.html ) so do not hesitate to see it will soon disappear;

houses Houses are “lying ash” to the foundations, mostly very few debris (at least some good: they will not have to clear it so much). All nicely uniform on white ash / dust.

It is true that houses built predominantly from wood easily burn. (Firefighters say somewhere that once a fire takes 5% of a wooden house, then it can not be extinguished). But we would expect different houses to have different layouts and “fillings” so they should burn differently from different locations, and the result of normal burning should be at least a bit of black burning and some burned debris. But it is here all in one uniformly aligned with the earth.

White burns can mean that there has been a fire / explosion / explosion with a very high temperature that normal fire does not usually reach, or the object has been destroyed by some other destruction – we are again with DEW. (Somehow, the WTC’s “wreckage” was after the 9/11 destruction). 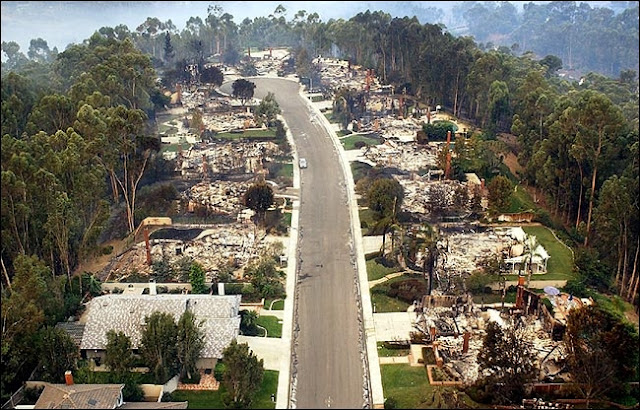 Picture below: How come some houses are completely burned, and others standing intact? 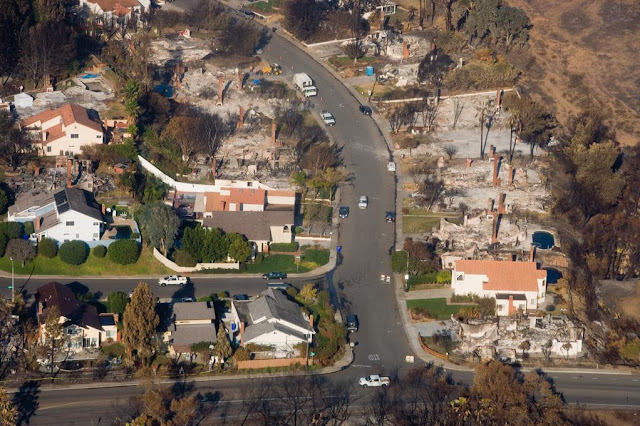 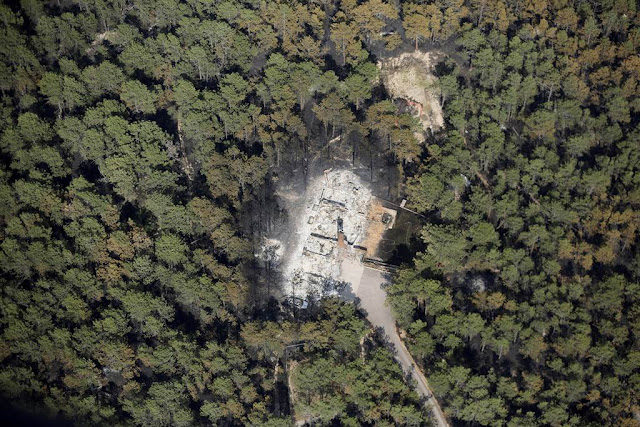 Image: Completely destroyed mansions in the middle of untouched forest.

In many incinerators, molten metal is molten, as if fired at a higher temperature than normal fire. Witnesses report broken concrete, porcelain, curled glass = melted glass. While normally flammable materials – paper, plastics, twigs – on the same “burning” are preserved. See, for example, the picture below, the car burns like a torch, a burning paper is lying around. 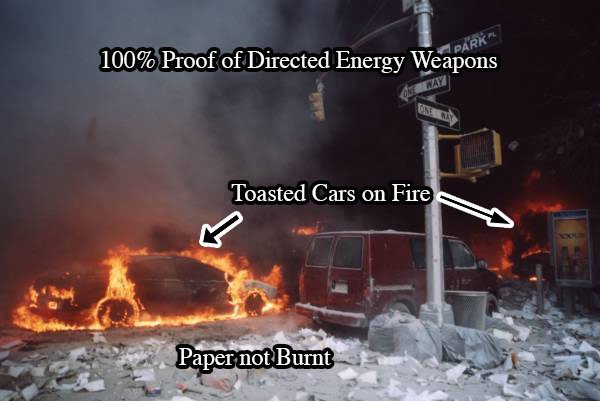 Image: Proof of use of weapons to controlled energy. Cars burn like torches, paper is lying around.

“Fire” has destroyed many California wine cellars. The following video is a compilation of damage in several California wine cellars: it shows strong uneven temperatures in a single “fire”. For example, glass bottles are deformed, while metal racks retain their shape. Molten bottles, but the paper napkins besides did not burn. The bottles melted, but the vineyard shrubs remained cool. Paper labels remained on the bottles. Etc. etc. 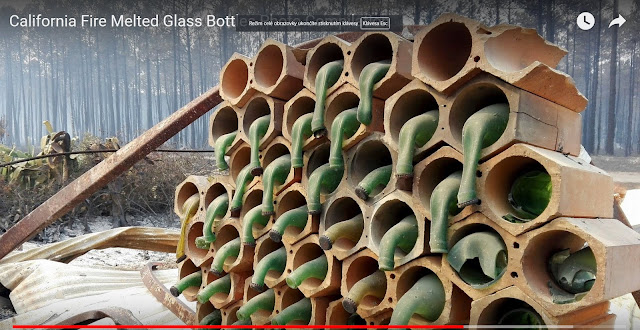 Image: molten glass bottles in a wine cellar. The forest stands in the background.

How do the firefighters ignore homes at a distance? Hypothesis about Smart Meters. It seems as if the arsonists were able to focus their firearms precisely on buildings (and cars, the next time). Based on what? In the US, many households have so-called “Smart Meters” – wirelessly communicating smart power meters that are heavily enforced by the government, and are extensively expanded in California; Under this hypothesis, these meters can emit a drones-trap signal, and they can precisely target their energy-driven beams. (See video: Californian fires: Weapons DEW? Smart meters?   Https://youtu.be/ViLKCrfmdmw  ).

Next time: How strangely cars burned.