PRAKLAND: Top Ten Reasons We Know It Was A Staged Political Event

The Parkland, FL, school shooting was one more in a (seemingly endless) string of fabricated events that appear to be designed to instill fear into the public to make it more amenable to manipulation to promote a political agenda, which, as Dave Hodges of The Commonsense Show has observed, has three stages:

First, a massive assault on the 1st Amendment, covered by the use of private companies–namely, the Social Media Giants: Google, YouTube, Facebook, and Twitter–to remove critics of “official accounts” from publicizing and sharing their research;

Second, a correlated attack on the 2nd Amendment, where the University of Hawaii’s Democide project has shown there were 19 genocides during the 20th Century, each of which was preceded by gun confiscation, leaving the population helpless to resist; and,

Third, the extraction of dissidents–the critics, those who speak out against “fake news”, propaganda and censorship–who must be removed because they pose a threat to the Deep State and can inspire others to stand up for their rights and transferred to American gulags, which we know as “FEMA camps”.

That the removal of guns from law-abiding citizens is not in the interest of the American people follows from studies that have shown that gun ownership and homicide rates are inversely related, which means the greater gun ownership, the lower the homicide rate, as multiple studies have shown. John Lott, The War on Guns (2016), makes a very good read about what’s really going on. Consider: 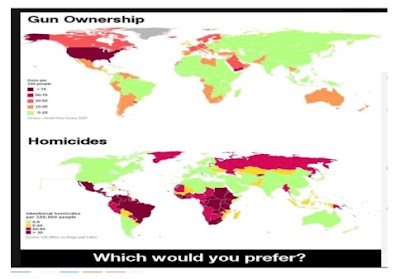 This means that we confront the choice between high gun ownership and low homicide rates or low gun ownership and high homicide rates. Why call the police in a threatening situation? Because they have guns. Egad! Are we incapable of learning from the Chicago experience, which has among the most stringent gun control laws in the country but also the highest gun violence and homicide rate?

Parkland is only the latest in a series of staged events, which are intended to undermine our rights under the 2nd Amendment, which were inspired by Barack Obama’s nullification of the Smith-Mundt Act, which precluded the use of the same techniques of disinformation and propagand within the United States as were being used without. For substantiation, here’s a review of the latest on Sandy Hook, the Boston bombing, Charlottesville, Las Vegas and Parkland, about which much more below: 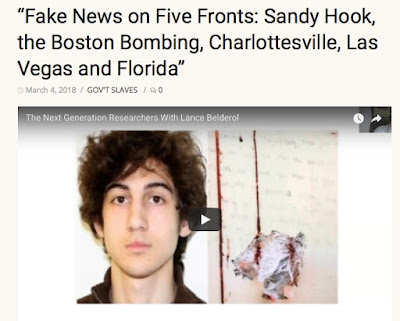 http://powerhournation.com/video-fake-news-on-five-fronts/
Here are ten reasons for concluding that the Parkland Shooting was a staged event, planned long in advance, which included the use of student “crisis actors” faking wounds they did not incur and even teachers and doctors making false claims about the death of a fellow teacher (who was no longer at the school) and about wounds that healed in record time (in violation of the laws of physiology and medicine). See how many more proofs you can discern. We begin with location, location, location:
(1) It was staged in the immediate vicinity of Mar-a-Lago to as a challenge to President Trump: 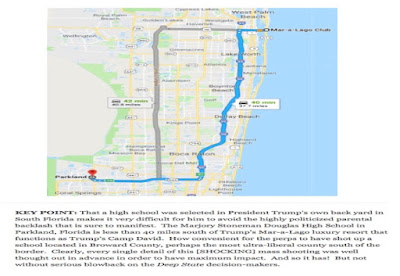 (2) The timing was exquisite on multiple grounds, which were to benefit the Democratic Party:

(2a) Changing the narrative from the crumbling Russiagate
scam to gun control: 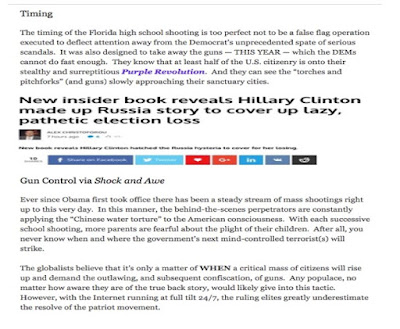 (2b) Diverting attention for Debbie Wasserman Schultz (D-
FL) from the Awan trial: 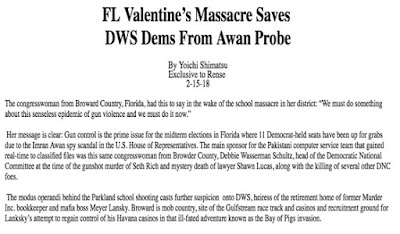 (3) The school was named after an environmentalist who opposed draining the Everglades: 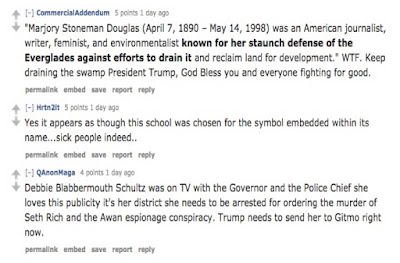 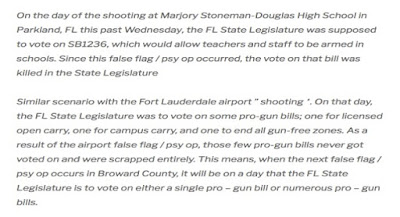 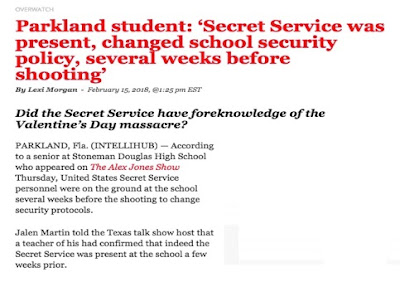 (6) A key surveillance camera was removed from the entrance to the freshman building: 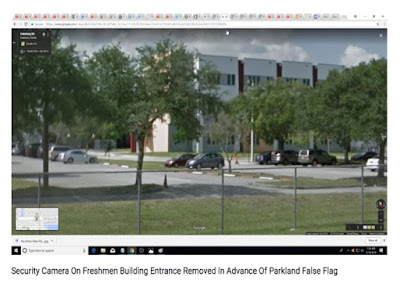 (7) Army personnel were directing students not to look at bodies they were concealing under mats: 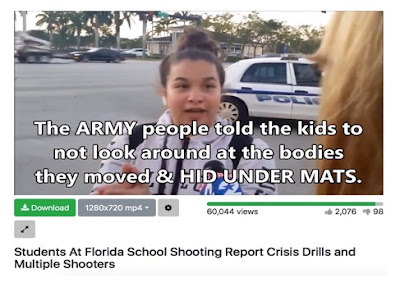 (8) EMTs were anxious to go in to aid the wounded, but were held back by “law enforcement”: 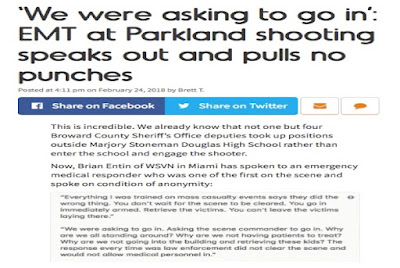 (9) There were students faking wounds, teachers and doctors lying, and phony student activists:
(9a) Aaron Feis, who was hailed for giving his life to protect his students, attends a funeral: 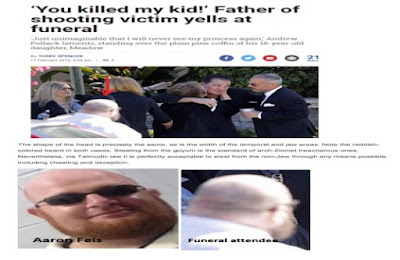 (9b) Student shot in the right leg turns out to be wearing a prosthesis with no toe nails: 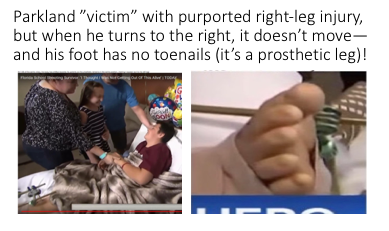 (9c) Maddy Wilford, shot 3 times, has miraculously healed from her most serious wounds: 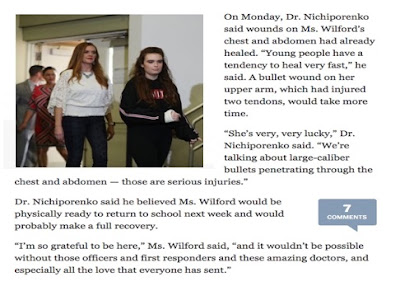 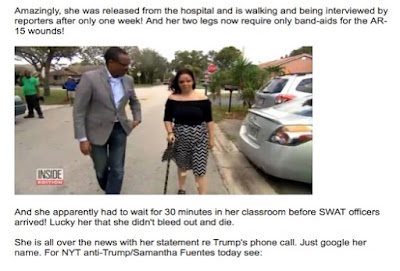 (9e) Another student “in holocaust class” said she defected a bullet with a book, “a tiny book”: 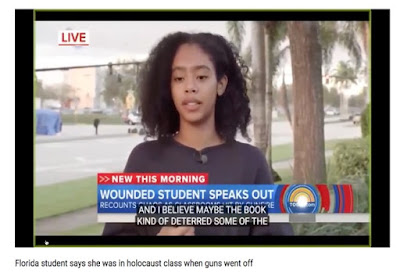 (9f1) A teacher said she confronted the shooter, who shot and killed another across the hallway: 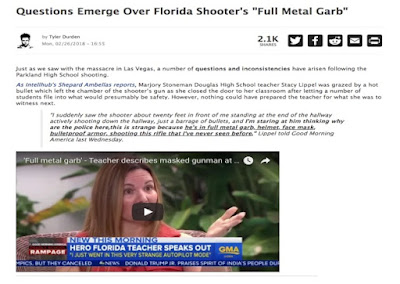 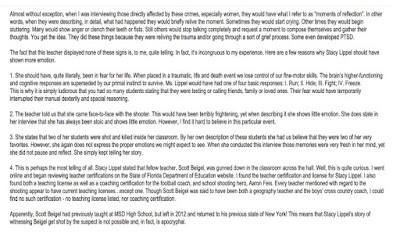 (9g) The only “live” footage shows an apparent mannequin lying in a pool of fake blood: 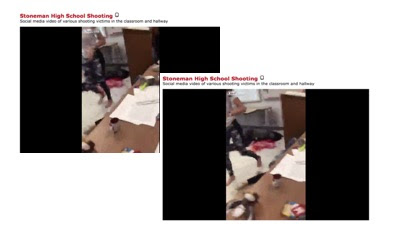 (10) The father of student activist David Hogg turns out to be an FBI “Crisis Management Specialist”:

(10a) David was outed by a fellow student in an earlier exchange caught on tape:

(10b) Surprise! His father, Kevin, turns out to be an FBI “Crisis Management Specialist”:

WOW! What are we to conclude from the evidence? Using inference to the best explanation, I would suggest that the hypothesis,

(h1) Parkland was yet another staged shooting event,

is overwhelmingly better supported than its alternative,

(h2) Parkland was a real shooting where 17 died.

Here’s a comprehensive review of virtually every aspect of the Parkland shooting, including how they appear to have arranged to have a cooperative coroner in place, just as they have in Las Vegas. If we can’t see through these staged events, they are going to vitiate the 1st Amendment and take our guns. We will then be helpless to defend ourselves against the tyranny of the Deep State enveloping us. Who better to write the script than an FBI “Crisis Management Specialist”, the father, Kevin Hogg? 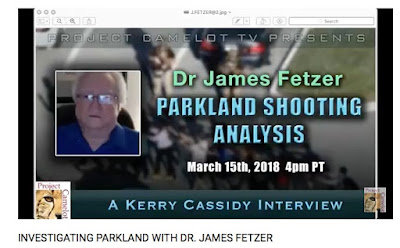 My inference is that this was done in collaboration with the local authorities, including the Broward County Sheriff, Scott Israel, where David Hogg was planted in the school to be a spokesman for gun control in accordance with the agenda of the DNC and Debbie Wasserman Schultz, who desperately need to change the narrative from the crumbling “Russiagate” story and FBI/DNC/DWS collusion to the more DNC-friendly gun control agenda, using students as stooges and unwitting DNC activists. 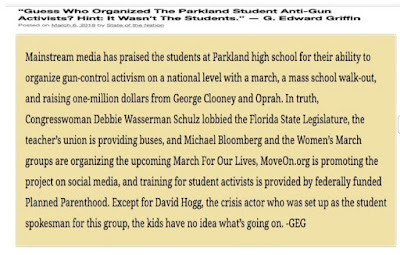 Yes, even the students, for the most part, have been played. They don’t know enough about the issue to have a rational opinion about gun control, especially when it turns out that rates of gun ownership and homicide are inversely related. We have another example of a popular, widespread belief–that the more guns, the more homicides–being exploited by a political party to advance its interests at the expense of the interests of the American people. Don’t be played! They are out to steal out country.