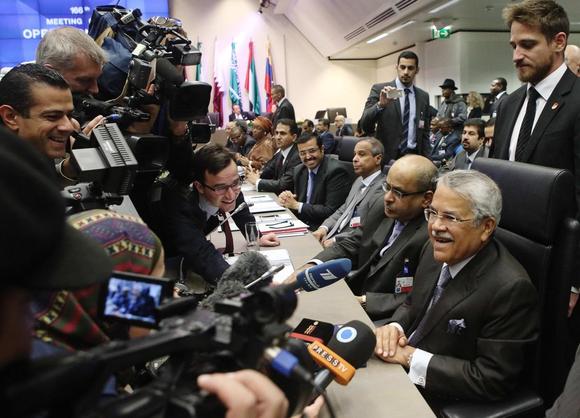 Ali al-Naimi won the argument at Thursday’s meeting, against the wishes of ministers from OPEC’s poorer members such asVenezuela, Iran and Algeria which had wanted to cut production to reverse a rapid fall in oil prices.

They were not prepared to offer big cuts themselves, and, choosing not to clash with the Saudis and their rich Gulf allies, ultimately yielded to Naimi’s pressure.

“Naimi spoke about market share rivalry with the United States. And those who wanted a cut understood that there was no option to achieve it because the Saudis want a market share battle,” said a source who was briefed by a non-Gulf OPEC minister after Thursday’s meeting.

Oil hit a fresh four-year low below $72 per barrel on Friday [O/R]. A boom in shale oil production and weaker growth inChina and Europe have sent prices down by over a third since June.

“You think we were convinced? What else could we do?” said an OPEC delegate from a country that had argued for a cut.

Asked on Thursday if the organization had a answer to rising U.S. production, he said: “We answered. We keep the same production. There is an answer here”.

OPEC agreed to maintain — a “rollover” in OPEC jargon — its ceiling of 30 million barrels per day, at least 1 million above its own estimate of demand for its oil in the first half of next year.

Analysts said the decision not to cut output in the face of drastically falling prices was a strategic shift for OPEC.

“It is a brave new world. OPEC is clearly drawing a line in the sand at 30 million bpd. Time will tell who will be left standing,” said Yasser Elguindi of Medley Global Advisors.

The OPEC delegate from one of the countries that wanted a cut, said: “OPEC has lost credibility,” and added: “I don’t know how practical it is to try to kick shale out of the market.”

Several OPEC ministers who wanted a cut left the meeting room visibly frustrated and kept silent for several hours although when they spoke later they said they accepted the decision.

“We are together,” said Venezuelan Foreign Minister Rafael Ramirez when asked whether there was a price war within OPEC.

A Gulf delegate said Naimi had reassured members that the oil price would recover as demand will ultimately pick up. But he insisted that if OPEC cut output it would lose market share.

“Reaching a final decision took a lot of time convincing the others,” said another delegate.

Several analysts and oil executives have suggested it would take many months to have an impact on U.S. oil production.

Even some Gulf delegates said they were not convinced Naimi’s gamble would work. One said: “If they are really after U.S. shale, how much would this rollover slow them (U.S. producers) down?”