When you have greed on a scale of the ridiculous, you do things like steer a hurricane into an area that deals with oil, big oil. There is no bigger state than Texas when it comes to big oil. Texas has refineries that feed a huge percentage of America, thus feeding the Godzilla trough of huge cash.

I don’t give a damn what people think happened here, HAARP technology steered Harvey for nothing more than greed for the mammon that is going to affect us all, big time, probably for many years to come. As we have been hearing on Henry’s show now for months, there is a huge glut of oil, this oil is now a sea of black gold thanks to Harvey’s destruction.

The price of oil will undoubtedly skyrocket when Harvey is done, millions of auto and commercial vehicles will be gouged, big time. Jobs are going to be created from all the reconstruction, giving our illustrious leader all kinds of wiggle room to prim his feathers, and take credit for the huge influx of cash that is about to enter the economy. A carnival bark that will eclipse all carnival barks.

People will be hired by the millions, only to give back the money earned while paying for the inevitable inflated price of fuel, nationwide. Billions if not trillions are about to be fleeced from Americans, while the storm steering asshats laugh their fool heads off.

They’re telling us this is the biggest hurricane to hit the Texas coastline in 40 or 50 years, it’s what they’re not telling us is why American Nationals are sick and tired of all the bullshit. Chemtrails, micro wave bursts from HAARP creating low and high pressures steering Harvey is what happened here, nothing more.

The establishment just gave Americans the finger and are about to rape the hell out of us all. 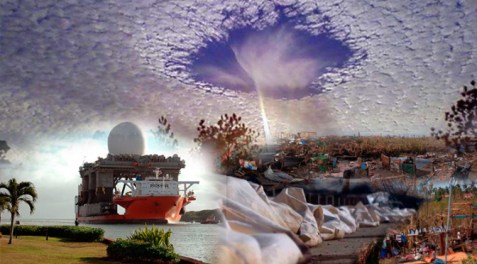 U.S. Attacked the Philippines with HAARP

Back in November 2013, we were knocked out of the Net after HAARP devastated much of Leyte and the entire Visayas, Philippines. Until now, people are still suffering the effects of that manmade disaster, e.g. homelessness, high food prices, epidemic, persistent live virus mass injections, etc.

We are also experiencing intermittent internet connections every now and then.

Just before the attack, we already knew it’s not going to be an “Act of God” but a deliberate attempt to pin as further down for reasons that we are also aware of already.

Before you continue reading the featured article below, understand that even the US Air Force officially admitted its ability to control the weather during a congressional budget hearing.

“The US Air Force and DARPA would like us to believe that they have stopped using HAARP in Alaska for research and experiment. Even then, we all know that there are other HAARP systems out there in the form of radar communication and surveillance systems that are rigged on top of mobile platforms that are deployable anywhere in the world.

All they need to do is twist a button to change the frequency to microwave range and increase transmission power enough to reach and heat up the atmosphere above the target.”

The technology is covered under US Patent 4,686,605 on the “Method and Apparatus for Altering a Region in the Earth’s Atmosphere, Ionosphere, and/or Magnetosphere.” 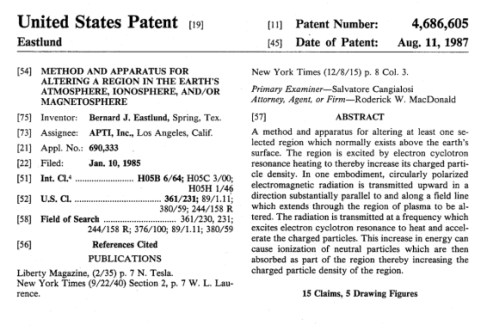 PressCore has posted this a week after Typhoon Haiyan or Yolanda event. Thanks I4T. 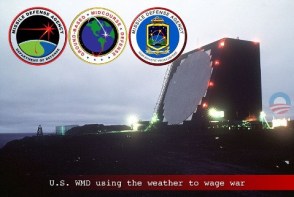 The U.S. military’s Sea-Based X-Band Radar(SBX-1) was ordered to set sail out of its berth in Hawaii on March 23, 2013 on what the United States Department of Defense (DoD) claims to be routine sea trials. However in light of recent events in the Philippines – typhoon Haiyan – microwave data from the devastated region gives evidence that the SBX-1 was ordered deployed by the U.S. government (Barack Obama) to the Pacific to complement other U.S. military controlled steerable phased array radar systems (HAARP) in Japan to wage war against the Philippines using HAARP’s weather modification capabilities. The SBX-1 was deployed for geopolitical purposes. As a U.S. military controlled weapon of mass destruction – an act of war.

The SBX-1’s active electronically scanned array (AESA) radar is mounted on a Russian-built fifth generation CS-50 twin-hulled semi-submersible drilling rig designed to function in the type of adverse conditions often encountered in ocean operations. The SBX-1 was built for 1 purpose – weather modification which was revealed in the U.S. Air Force report titled “Weather as a Force Multiplier: Owning the Weather in 2025” (link is to pdf file on U.S. Air Force website). The HAARP SBX-1 sea-based platform complies with a directive from the chief of staff of the U.S. Air Force to build upon weather modifying concepts, capabilities, and technologies that the United States can use to remain the dominant air and space force in the future. Presented on 17 June 1996, this report was produced in the Department of Defense school environment of academic freedom and in the interest of advancing weather modifying weaponry related to national defense and geopolitical purposes. The U.S. weather weapon of mass destruction system called HAARP has been fully operational since Hurricane Katrina – 30 years ahead of schedule.

A steerable US land-based X-Band Radar system (COBRA DANE phased array radar system) was already built in northern Japan by the United States military and has been operational since 2006 and a second COBRA DANE installation in central Japan came online just prior to super typhoon Haiyan – the strongest wind storm ever recorded – being formed at sea and steered into the Philippines using HAARP AMISR phased array radar beam triangulation.

The SBX-1 and the land based systems are all part of the US Missile Defense Agency’s (MDA) Ground-based Midcourse Defense (GMD) project and performs a vital role in the Ballistic Missile Defense System (BMDS). The SBX-1, the land based systems and the orbital X-37B are all illegal weapons of mass destruction. All are banned by under the “Environmental Modification Convention (ENMOD)” treaty – an international treaty prohibiting the military or other hostile use of environmental modification techniques having widespread, long-lasting or severe effects. It opened for signature on 18 May 1977 in Geneva and entered into force on 5 October 1978.

The US Air Force’s Boeing X-37B (USA 240) Orbital HAARP – the main weapon of mass destruction of Prompt Global Strike (PGS) – was in a geosynchronous Earth orbit over the Pacific on November 9, 2013 during the U.S. government’s HAARP weather modifying operation against Philippines.

Maj. Gen. Michael Carey refused to ready ICBMs for the thwarted Obama false flag operation against the U.S. Isn’t it time to indict Obama for treason and according to US law seek the max punishment for his crime – is guilty of treason and shall suffer death. I am sure no fewer than 60 top military officers will come forward as witnesses.

According to the Pentagon Obama is not only purging the military of commanders that refuse Obama’s unlawful orders, but Obama’s actions are meant to strike fear in the hearts of those still serving. The Pentagon says Obama is threatening “young officers”, down through the ranks not to talk about Obama or oppose the treacherous politics of the White House. They are purging everyone and if you want to keep your job — just keep your mouth shut and commit acts of treason against the United States.

What was the purpose of decimating the Philippines with the HAARP created and steered typhoon Haiyan? To establish a permanent military base for the U.S. military within ICBM striking distance of North Korea, China and Russia.

U.S. boots are already on the ground. The USS George Washington arrived in the Philippines with 5,000 Marines aboard. The aircraft carrier battle group was already deployed prior to typhoon Haiyan. US Marines were deployed to Hong Kong for this HAARP attack against the Philippines. Their mission isn’t humanitarian. It is to seize control of the country. As in Korea, Cuba, Iraq, Afghanistan, Libya, Somalia, and Haiti U.S. troops never leave once boots are on the ground in a foreign state.

For more evidence on the hurricane (typhoon) creating and steering technology that exists and is being used today read the article I wrote on June 1st 2011 titled “HAARP electromagnetic waves can be used to stimulate geophysical events such as earthquakes, climate change, volcanic eruptions and the like.” http://presscore.ca/2011/?p=2730

That article starts out by stating – “In a lecture on April 27, 1997 at the University of Georgia former Secretary of Defense, William Cohen spoke on weapons of mass destruction. At that lecture Cohen asserted that “electromagnetic waves can be used to stimulate geophysical events such as earthquakes, climate change, volcanic eruptions and the like”. ”

How hurricanes and tornadoes are created using HAARP

Already in the 1970s, former National Security advisor Zbigniew Brzezinski had foreseen in his book “Between Two Ages” that:

“Technology will make available, to the leaders of major nations, techniques for conducting secret warfare, of which only a bare minimum of the security forces need be appraised… Techniques of weather modification could be employed to produce prolonged periods of drought or storm. ”

In the US, the technology is being perfected under the High-frequency Active Aural Research Program (HAARP) as part of the (“Star Wars”) Strategic Defence Initiative (SDI). Recent scientific evidence suggests that HAARP is fully operational and has the ability of potentially triggering floods, droughts, hurricanes and earthquakes.

The above presscore.ca article references and listed patents should be enough to convince any intelligent person that man made hurricanes is real and is now actively being used by the US government to modifying our weather and triggering hurricanes and earthquakes. Hurricane Sandy is Obama’s second and very successful use of this weapon of mass destruction technology for geopolitical gain.

The Department of Homeland Security’s Science and Technology Directorate, which direct agencies from the Federal Emergency Management Agency to Immigration and Customs Enforcement, expressed major interest in the science of hurricane modification. “It sounds kind of crazy and science fiction-ish, but it’s really the direction we need to go in,” Chris Doyle, head of DHS’s science and technology research division, told a conference of the American Meteorological Society in May of 2008.

Hurricane researcher Joseph Golden, a veteran of Project Stormfury, the federal government’s last attempt at militarized weather modification in the 1960s, organized a meeting of scientists at an interdepartmental hurricane conference to discuss weather modification. They discussed how hurricane steering could be used as a geopolitical tool. The major question of the conference was “Where would scientists direct a storm”? Toward a less populated area or into major metropolitan areas? Steering a hurricane into small communities could wipe them out financially. Steering a hurricane into a farming community could wipe out crops. Steering a hurricane into a major city could cripple it for days, weeks or even years (Hurricane Katrina) and result in significant loss of life. Like Project Stormfury they were discussing how steering hurricanes could be used a geopolitical weapon.

The U.S. made typhoon Haiyan has devastated not only the Philippines but South Korea, who will now be forced to import U.S. goods to offset what won’t be coming out of the Philippines for quite some time.

Strong motive for the U,S, to destabilize relations between Korea and the Philippines. Without political tensions in the region the U.S. cannot justify having U.S. military forces in the region.