The FED is in serious trouble, 6,200 tons of gold unaccounted for

The Fed Has 6,200 Tons of Gold in a Manhattan Basement—Or Does It?

Eighty feet below the streets of lower Manhattan, a Federal Reserve vault protected by armed guards contains about 6,200 tons of gold. 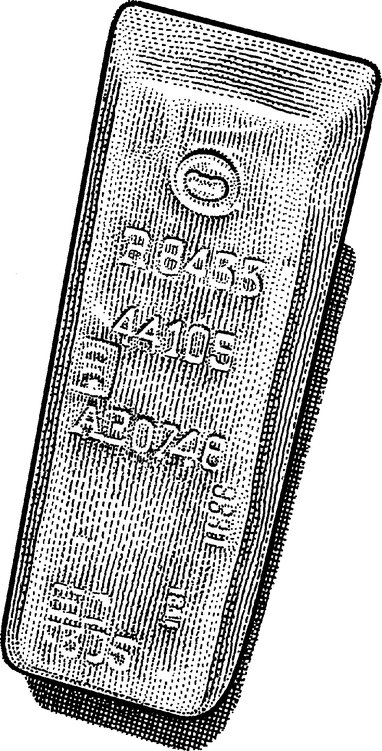 The Fed tells visitors its basement vault holds the world’s biggest official gold stash and values it at $240 billion to $260 billion.

But “no one at all can be sure the gold is really there except Fed employees with access,” said Ronan Manly, a precious-metals analyst at gold dealer BullionStar in Singapore. If it is all there, he said, the central bank has “never in its history provided any proof.”

Mr. Manly is among gold aficionados who wonder if the bank is hiding something about what it’s hiding.

Other theorists suspect the gold beneath the New York Fed’s headquarters at 33 Liberty St. may be gold-plated fakes. Some conspiracy-minded investors think the Fed has been secretly leasing out the gold to manipulate prices.

“There has to have been a central bank spewing their gold into the market,” said John Embry, an investment strategist for Sprott Asset Management in Toronto until 2014 who once managed its gold fund. 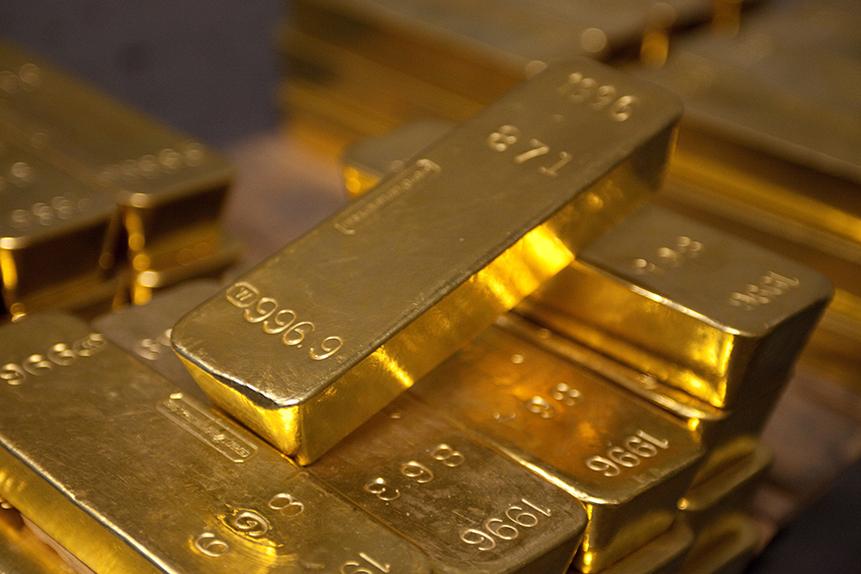 “The gold price didn’t act right” during the time he was watching it and the likely explanation for the movement was Fed action, said Mr. Embry.

Fed officials have heard theories about their gold holdings for many years and don’t think much of them. After this article was published, a Fed spokeswoman said the Fed doesn’t own any of the gold housed at the New York Fed, which “does not use it in any way for any purposes including loaning or leasing it out.”

The Fed has been selective in giving details about the contents of the vault and in the past has said it can’t comment on individual customer accounts due to confidentiality agreements.

Former Fed Chairman Alan Greenspan said in a July interview: “When you deposit your funds in a bank, should that bank make your account balances available to whomever asks?”

Seeking a better glimpse inside the vault and at Fed procedures and records, The Wall Street Journal filed Freedom-of-Information requests with the New York Fed. Among the Journal’s findings, from a heavily redacted tour-guide manual provided by the Fed: Tour guides are informed that “visitors are excitable” and should be asked to “please keep their voices down.”

Three Fed staffers must be present when gold is moved or a compartment opened, even to change a lightbulb, and no attempts have been made to break in, documents state.

New York Fed President William Dudley told a March gathering in Queens, N.Y., that the fictional raid by drilling through from a subway tunnel in the 1995 movie “Die Hard With a Vengeance” was far-fetched.

The Fed gives some information about the vault on a website and offers tours. A guide on one tour gave some details: Inside is enough oxygen for a person to survive 72 hours, should someone get trapped; custodians wear magnesium shoe covers to help prevent injuries, should they drop 27-pound bars; the Fed charges $1.75 a bar to move gold but nothing to store it; most of the gold is owned by foreign governments. 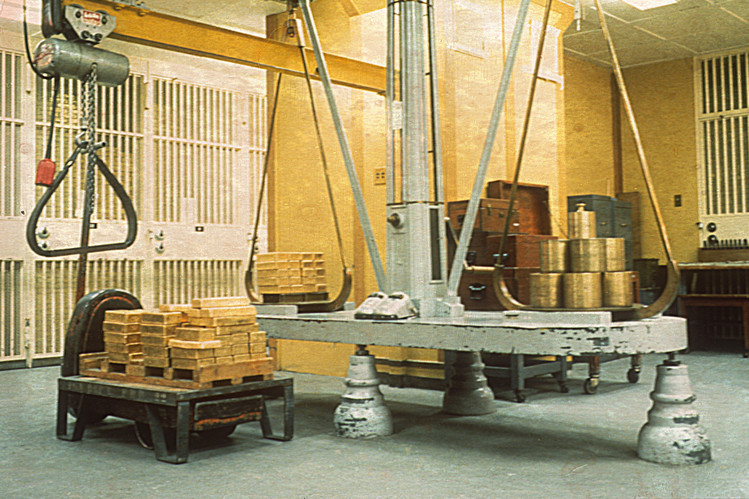 Along with the foreign gold, the Fed’s Manhattan vault holds about 5% of America’s roughly $11 billion in gold reserves and coin, valued at the statutory rate of $42.22 per fine troy ounce, according to the U.S. Mint. The U.S. government keeps the rest in Denver, Fort Knox, Ky., and West Point, N.Y.

Elaborate theories build on what the Fed doesn’t say about goings-on in its vault’s 122 compartments.

It doesn’t report when bars enter or leave and doesn’t let in outsiders—other than auditors and account holders—to count the bars or review records.

Visitors on vault tours see only a display sample and can’t verify bars up close.

“All you see is the front row of gold bars,” said James Turk, co-founder of Goldmoney, a gold custodian. “There’s no way of knowing how deep the chamber is or how many rows there are.” 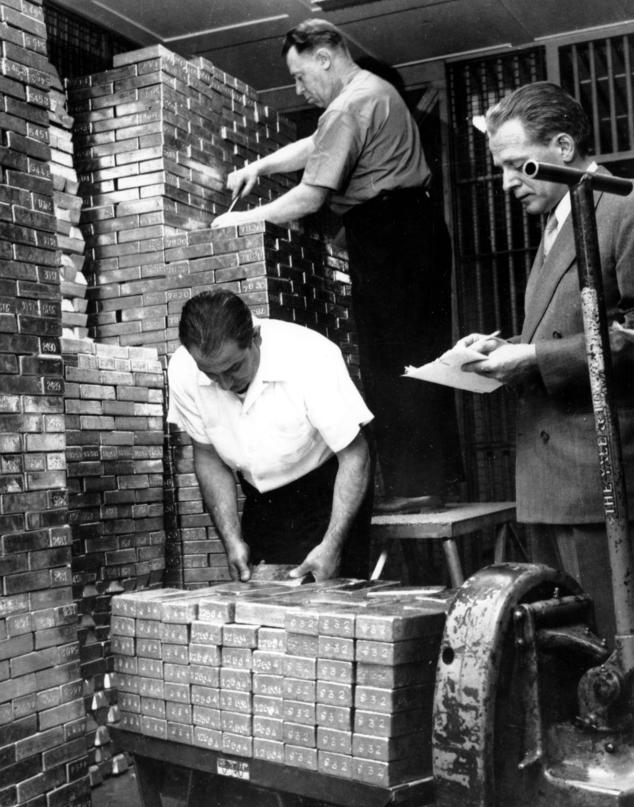 Mr. Turk, based in London, believes much of the gold has been “hypothecated,” or lent out to other parties, and then rehypothecated, or lent to multiple parties at once. In doing so, he says, “central banks actually own less gold than people believe.”

Some gold bugs—investors bullish on the yellow metal—think the Fed secretly lends it out to suppress prices, partly to protect the dollar’s value. In theory, the Fed can feed gold into the market through swaps with other countries.

James McShirley, who owns Sulphur Lumber in Sulphur Springs, Ind., and has traded gold, believes investment banks, probably as agents for the Fed, act to lower prices when gold futures gain 1%. “It’s totally logical that in addition to maintaining artificially low interest rates,” he said, “it would be imperative to keep gold suppressed as an inflationary barometer.”

Then there’s the purity question. Mr. Turk said there are “questions in gold circles as to what’s in an actual bar.” One theory, he said: They could be gold-plated tungsten, which would weigh almost the same.

“I think the gold they have there is real gold,” he said, “but until you do random sampling you don’t know for certain.”

In a 2012 audit of U.S. gold at the Fed’s vault, the U.S. Mint and the Treasury’s Office of Inspector General sent 367 samples to an independent lab for testing. All but three samples came back within 0.13% of the purity recorded by the government, within standard industry tolerance, according to the Mint and Treasury. 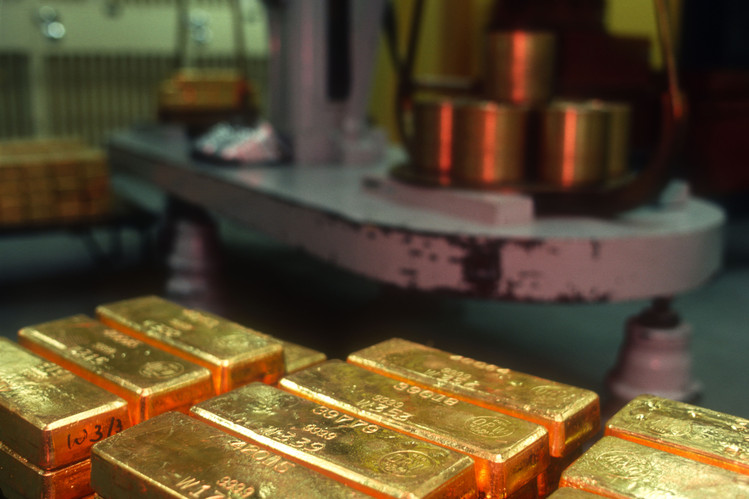 Since then, annual government audits of the Fed’s vault have inspected only the locks and joint seals on the compartments to check they haven’t been tampered with, a Mint spokesman said.

That isn’t enough, said Peter Boehringer, founder of the German Precious Metals Society. The problem, he said, is the “complete lack of a transparent, full, independent, external audit in the Fed´s vaults by a sworn-in auditor.”

Former U.S. Rep. Ron Paul, the senator’s father, has been outspoken about what he says is taxpayers’ need for more transparency about gold from the Fed. “Even if you could walk into that vault and see a lot of gold, you wouldn’t know…whether it’s been loaned out or sold,” he said. “They haven’t convinced me that we have total control of it.”