Bennington’s death at 41 sent shock waves through a music community still reeling from Soundgarden frontman Cornell’s own suicide May 18 in Detroit.

The pair, both lead singers of their respective bands, were close friends for years and often appeared on stage together. Bennington was even the godfather to one of Cornell’s children.

The day of Cornell’s death, Bennington penned a touching tribute to his pal on Twitter, praising his talent and thanking him for the time they spent together. “I’m still weeping, with sadness, as well as gratitude for having shared some very special moments with you and your beautiful family,” he wrote. “You have inspired me in many ways you could never have known Your talent was pure and unrivaled. Your voice was joy and pain, anger and forgiveness, love and heartache all wrapped up into one. I suppose that’s what we all are.”

Bennington ended his note with a heart wrenching, “I can’t imagine a world without you in it.” 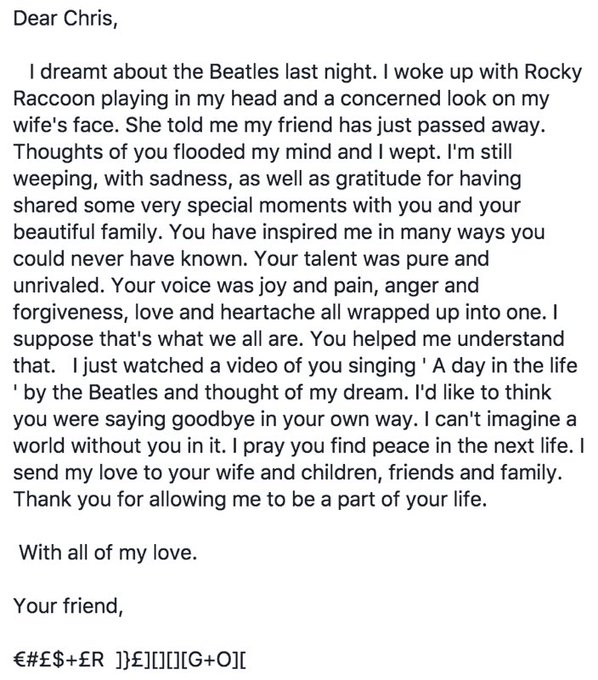 With all of my love @chriscornell.

At Cornell’s private funeral service on May 27, Bennington and his Linkin Park bandmates performed an emotional rendition of Leonard Cohen’s “Hallelujah.”

The pair’s relationship stretches back years, and so do their musical collaborations.

In 2008, Cornell toured with Linkin Park, letting Bennington take the stage with him to sing “Hunger Strike,” a song that appeared on a Temple of the Dog album in 1991.

Bennington repaid the favor, with Cornell joining him for a version of Linkin Park’s hit “Crawling.”