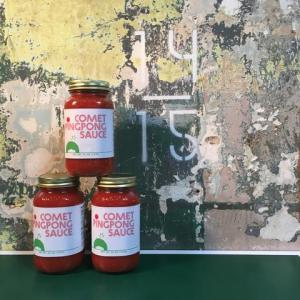 Pizzagate got cooking on the internet as part of the sex scandal that took down onetime Democratic politician Anthony Weiner. The theory grew out of a white-supremacist Twitter account apparently, which posted about a week before the election last year that Weiner’s laptop contained evidence of a child sex ring.

As the story drew in conspiracy-minded websites and pundits such as Alex Jones, rumors of Satanic ritual murder took hold. Internet investigators soon took their search to the WikiLeaks trove of John Podesta emails that hackers obtained from Hillary Clinton’s campaign chief.

The emails showed that Podesta wrote to James Alefantis, the owner of Comet Ping Pong pizzeria in Washington, D.C., about pizza. According to the conspiracy, however, pedophiles use the term “cheese pizza” as code for child pornography since the initials are the same.

Suspicious of Alefantis’ D.C. political connections, the conspiracists marveled at the fact that his Comet Ping Pong drew a number of high-ranking diners from Podesta to President Barack Obama.

Edgar Maddison Welch was arrested at Comet Ping Pong on Dec. 4, 2016, after opening fire in the restaurant to gain access to the locked rooms where he expected to find sex dungeons.

A new entry Wednesday to the Salisbury, North Carolina, man’s docket reveals that he will change his plea to guilty before U.S. District Judge Kentanji Brown Jackson.

Nobody was injured during the incident, but dozens of employees and customers had been reportedly been inside Comet Ping Pong when Welch commandeered it with his loaded AR-15 rifle.

After his arrest, Welch told investigators that he drove out to D.C. after having spent the last several days prior binge-watching Youtube videos on Pizzagate.

Welch tried to shoot open one of the restaurant doors after first trying to gain entry with a butter knife. He ultimately used a nearby window to peek inside and found the room empty.

Police have stated they found several spent shell casings and other physical evidence showing Welch had fired the AR-15 several times while inside the restaurant. A loaded .38 caliber shotgun was retrieved from Welch’s parked car.

Evidence from Welch’s cellphone showed that he had been planning the confrontation for days and tried to recruit two friends to help him.

One individual referred to as “C” in court documents texted Welch about going to help Native Americans in their standoff with federal officials related to the Dakota Access Pipeline.

Welch responded: “Way more important, much higher stakes.” Welch then told his friend about the Pizzagate scandal, after which “C” texted “I’m in.”

After asking whether “C” had any Army friends who would be interested in joining, Welch said they would be “raiding a pedo ring, possibly sacraficing [sic] the lives of a few for the lives of many.”

He added: “I’m sorry bro, but I’m tired of turning the channel and hoping someone does something and being thankful it’s not my family. One day it will be our families.”

The morning of Dec. 4, the three friends met at one of their houses. That morning Welch recorded himself on his cellphone telling his family that he loved them and that he hoped to be able to tell them again soon he loved them. “And if not, don’t ever forget it,” he said in the recording.

On the hours-long drive to D.C., Welch texted his girlfriend — who was watching his children — that he “might be gone awhile.”

Pizzagate has attracted some well-known acolytes, including basketball star Andrew Bogut and Michael Flynn Jr., who had worked with the Trump campaign and whose father resigned last month as President Donald Trump’s  national security adviser.

The charges against Welch carried a possible 10 years sentence. A plea-agreement hearing is scheduled for March 24.

Youtube videos about Pizzagate are still being made, some hours long, arguing that the scandal is all too real.

Incidentally, the Twitter user who got the dough rolling last fall was unmasked recently as a woman living in Missouri. On Twitter, she had professed to be a New York Jew named David Goldberg.