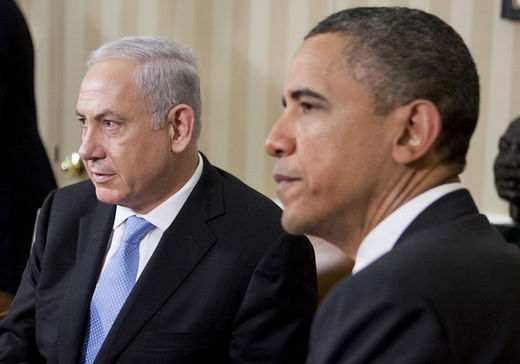 Today July 29th, a transcript of a conversation between President Obama and Prime Minister Netanyahu was leaked and, if true, it’s very revealing. Here is the transcript, translated from Hebrew by Israel’s Channel One and published by the Times of Israel in English:

Barack Obama: I demand that Israel agrees to an immediate, unilateral ceasefire and halt all offensive activities, in particular airstrikes.

Benjamin Netanyahu: And what will Israel receive in exchange for a ceasefire?

BO: I believe that Hamas will cease its rocket fire – silence will be met with silence.

BO: I repeat and expect Israel to stop all its military activities unilaterally. The pictures of destruction in Gaza distance the world from Israel’s position.

BO: Within a week of the end of Israel’s military activities, Qatar and Turkey will begin negotiations with Hamas based on the 2012 understandings, including Israel’s commitment to removing the siege and restrictions on Gaza.

BN: Qatar and Turkey are the biggest supporters of Hamas. It’s impossible to rely on them to be fair mediators.

BO: I trust Qatar and Turkey. Israel is not in the position that it can choose its mediators.

BN: I protest because Hamas can continue to launch rockets and use tunnels for terror attacks –

BO: (interrupting Netanyahu) The ball’s in Israel’s court, and it must end all its military activities.

Despite the “demands” by the President of the United States, Netanyahu’s inhuman, genocidal campaign against the Palestinians in Gaza goes on.

How can this happen? It’s obviously because Israel controls the United States government and political system. Netanyahu and former Prime Minister Ariel Sharon have bragged about it in the past. The extent of that control is shown by the vote in the U.S. Senate supporting Israel’s attack on Gaza where all 100 Senators voted in favor of it. How often do 100 US senators agree on anything? Of course, not all of them may have personally agreed with the attack, but it would have been political suicide for any of them to vote against it.

Where does that leave the world? In a bad place.