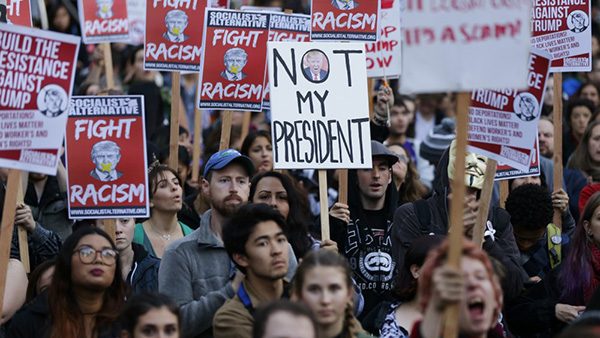 The fulfillment of a predicted warning of total chaos coming to the United States within the next three to six months is now coming into view. A former CIA officer who is founder of the Earth Intelligence Network, Robert David Steele, is warning a violent American spring looms ahead of us.

“The American spring is going to begin as soon as the weather gets nice with tens of thousands of paid agitators across the country. It is going to end with three million people being bused into Washington, D.C. on May Day, on the first of May.”

Mr. Steele description of the coming events as the “American Spring” seems appropriate because the same person responsible for causing the Arab Spring is now orchestrating the same thing here. President Obama is the driving force behind both. The Arab Spring was a series of violent uprisings, which arose throughout the Arab world in 2011 largely due to President Obama’s statements, policies, and actions.

The scheduled date for the march on Washington, May 1 2017.  The May Day March provides a significant kick off event for the three to six month window.

Scheduling the protest on May Day appears to be no coincidence. When written as one word, “Mayday” is an internationally recognized distress signal used in radio communications (Source: Wikipedia). The event organizers appear to be sending a clear signal. They are coming to bring distress to America.

Mr. Steele believes the uprising is coming from three distinct groups, all aggressively seeking to destroy Trump’s agenda for America. At the top of the list, Mr. Steele identified the left, which includes the mainstream news media and left-wing organizations funded by two anti-American globalists, billionaires George Soros and Tom Steyer.

President Obama is now actively working as Organizer in Chief, the front man for one of their primary organizations, Organizing for Action (OFA), which is recruiting and training tens of thousands of agitators every six weeks to use subversive tactics in public protests, all designed to get news media coverage with fake news designed to mislead the American people.

Obama’s actions are unprecedented among former U.S. Presidents who have traditionally kept a low profile, so as not to interfere with the agenda of the next President.

Obama has opted to remain in Washington, D.C., less than two miles from the White House, which is also unprecedented. Not only that, many of his former staffers are still working for him in his new role and tens of thousands of new recruits are joining him every month. In many ways, it is like he is still in office, which is a sign of great trouble ahead.

We are witnessing the biggest anti-American uprising since the Civil War. For nearly 250 years, America’s leaders have been required to pledge their allegiance to uphold and defend our Constitution, which has been the common ground uniting us as Americans. Anyone refusing to uphold the Constitution makes themselves our enemy, which is why President Abraham Lincoln declared war on the southern states who rebelled against the union when they formed the Confederate States of America in 1861.

Mr. Steele believes the window of opportunity for President Trump is very short, just 30 days, because in addition to the left-wing groups, Trump is under attack from two other groups, including establishment Republicans and the Deep State.

Establishment Republicans covertly violate the United States Constitution, which they have sworn to defend, by seeking to empower and enrich themselves at the expense of the American people. They include Republican leaders like Senator Mitch McConnell from Kentucky and Speaker of the House Paul Ryan from Wisconsin. Senator McConnell has openly called for the “destruction of the tea party” whose sole purpose is to uphold the U.S. Constitution.

Mr. Steele claims President Trump was forced to cut a deal with the establishment Republicans,

“To get from election day to the inauguration, Trump had to make some deals and Reince Priebus, the Judas in the White House, was part of that.”

Trump appointed Reince Priebus as his Chief of Staff. Then Priebus appointed John Destefano as the Director of the Office of Presidential Personnel. Then Destefano opened the door, loading the administration with establishment moles. Steele explained,

“I have recommended to Trump that he fire the Director of the Office of Presidential Personnel, (John) Destefano, who was put in there by Priebus specifically to frontload all of Donald Trump’s political appointees with moles from the establishment.”

The plot thickens as Trump has now discovered perhaps his greatest weapon to fight the establishment Republicans, publicly exposing their participation in pedophilia. Steele claims,

“Priebus is among other things an enabler and cover upper of pedophilia… I absolutely guarantee you that Julian Assange (founder of Wikileaks) is going to take down the Republican party and Reince Priebus specifically. I have, for over a decade, been working with a number of people on pedophilia as an elite privilege. For Democrats, it is actually an acquired taste. John Podesta (former campaign manager for Hillary Clinton) is a pedophile-lite. The Republicans and the elite in banking are the ones who have really made this a big league thing. There are Saudi Arabian restaurants with basements in Washington DC where you can order children on the menu. This is what I have been told. I have not been to one of those restaurants, so I have never ordered a child on the menu. Pedophila is the Achilles heel and Donald Trump has figured that out.”

As if the Soros funded agitators and Dick Cheney led establishment were not enough, President Trump faces another formidable opponent. Steele explains,

“The third enemy group that Donald Trump is facing is the Deep State, which is the traitors. I think there are five hundred of them across the United States government who sold out for money, for ideology, or for religion.”

Steele sent a memo to President Trump identifying these three enemies and recommending an action plan. In the memo, he defined the Deep State as, “entrenched senior officials combined with Senators and Representatives being blackmailed and bribed to betray the Republic.”

The Deep State goes deeper than the five hundred traitors because we must ask who is paying them. Who are the shadow figures with such deep pockets?

They are the elephant in the room that everyone sees, but amazingly no one talks about. They are the bankers, the Fed Cartel who masquerades as a federal government agency, although everyone knows they are not. They operate as the Federal Reserve Bank, but they are gangsters who hi-jacked our currency in 1913 and have been writing our laws ever since. They have unlimited money printing ability with zero accountability because by law they cannot be audited, which explains why the Deep State has deep pockets to bribe, extort, spy on, threaten, and even murder our government leaders to control the votes of our legislators and the rulings of our court judges.

America is under attack from within. A secret war is being waged through our news media and the secret agendas of anti-American groups, including liberals, establishment Republicans, and the Deep State. The situation is serious and our chances for survival appear bleak, but God has just handed US a trump card.

Mr. Steele said, “Attorney General Jeff Sessions is going after the pedophiles and will be announcing arrests starting within the next couple of weeks.” If that is correct, we are going to hear some shocking revelations in the days ahead as pedophiles are exposed and children are set free.

The establishment Republicans and the Deep State bankers appear to be the most vulnerable, but stopping President Obama might be more challenging because even the slightest attack from Trump against Obama would ignite a furious news media onslaught and great division among our people because Obama left office with a 55% approval rating, which is truly mind boggling.