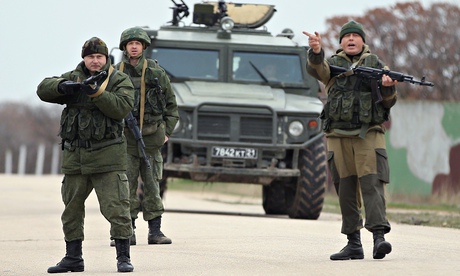 Troops under Russian command order Ukrainian soldiers to turn back before firing weapons into the air at Belbek airbase in Crimea. Photograph: Sean Gallup/Getty Images

Russia‘s armed intervention in the Crimea undoubtedly illustrates President Putin’s ruthless determination to get his way in Ukraine. But less attention has been paid to the role of the United States in interfering in Ukrainian politics and civil society. Both powers are motivated by the desire to ensure that a geostrategically pivotal country with respect to control of critical energy pipeline routes remains in their own sphere of influence.

Much has been made of the reported leak of the recording of an alleged private telephone conversation between US assistant secretary of state Victoria Nuland and US ambassador to Kiev Geoffrey Pyatt. While the focus has been on Nuland’s rude language, which has already elicited US apologies, the more important context of this language concerns the US role in liaising with Ukrainian opposition parties with a view, it seems, to manipulate the orientation of the Ukrainian government in accordance with US interests.

Rather than leaving the future of Ukrainian politics “up to the Ukrainian people” as claimed in official announcements, the conversation suggests active US government interference to favour certain opposition leaders:

Pyatt: Yeah. I guess… in terms of him not going into the government, just let him stay out and do his political homework and stuff. I’m just thinking in terms of sort of the process moving ahead we want to keep the moderate democrats together. The problem is going to be Tyahnybok [Oleh Tyahnybok, the other opposition leader] and his guys and I’m sure that’s part of what [President Viktor] Yanukovych is calculating on all this.

Nuland: [Breaks in] I think Yats is the guy who’s got the economic experience, the governing experience. He’s the… what he needs is Klitsch and Tyahnybok on the outside. He needs to be talking to them four times a week, you know. I just think Klitsch going in… he’s going to be at that level working for Yatseniuk, it’s just not going to work.

Nuland: OK. He’s [Jeff Feltman, United Nations Under-Secretary-General for Political Affairs] now gotten both [UN official Robert] Serry and [UN Secretary General] Ban Ki-moon to agree that Serry could come in Monday or Tuesday. So that would be great, I think, to help glue this thing and to have the UN help glue it and, you know, Fuck the EU.

Pyatt: No, exactly. And I think we’ve got to do something to make it stick together because you can be pretty sure that if it does start to gain altitude, that the Russians will be working behind the scenes to try to torpedo it.

“… suggests that the US has very clear ideas about what the outcome should be and is striving to achieve these goals… Washington clearly has its own game-plan…. [with] various officials attempting to marshal the Ukrainian opposition [and] efforts to get the UN to play an active role in bolstering a deal.”

But US efforts to turn the political tide in Ukraine away from Russian influence began much earlier. In 2004, the Bush administration had given $65 million to provide ‘democracy training’ to opposition leaders and political activists aligned with them, including paying to bring opposition leader Viktor Yushchenko to meet US leaders and help underwrite exit polls indicating he won disputed elections.

This programme has accelerated under Obama. In a speech at the National Press Club in Washington DC last December as Ukraine’s Maidan Square clashes escalated, Nuland confirmed that the US had invested in total “over $5 billion” to “ensure a secure and prosperous and democratic Ukraine” – she specifically congratulated the “Euromaidan” movement.

So it would be naive to assume that this magnitude of US support to organisations politically aligned with the Ukrainian opposition played no role in fostering the pro-Euro-Atlantic movement that has ultimately culminated in Russian-backed President Yanukovych’s departure.

“Today, there are senior officials in the Ukrainian government, in the business community, as well as in the opposition, civil society, and religious community, who believe in this democratic and European future for their country. And they’ve been working hard to move their country and their president in the right direction.”

What direction might that be? A glimpse of an answer was provided over a decade ago by Professor R. Craig Nation, Director of Russian and Eurasian Studies at the US Army War College’s Strategic Studies Institute, in a NATO publication:

“Ukraine is increasingly perceived to be critically situated in the emerging battle to dominate energy transport corridors linking the oil and natural gas reserves of the Caspian basin to European markets… Considerable competition has already emerged over the construction of pipelines. Whether Ukraine will provide alternative routes helping to diversify access, as the West would prefer, or ‘find itself forced to play the role of a Russian subsidiary,’ remains to be seen.”

A more recent US State Department-sponsored report notes that “Ukraine’s strategic location between the main energy producers (Russia and the Caspian Sea area) and consumers in the Eurasian region, its large transit network, and its available underground gas storage capacities”, make the country “a potentially crucial player in European energy transit” – a position that will “grow as Western European demands for Russian and Caspian gas and oil continue to increase.”

Ukraine’s overwhelming dependence on Russian energy imports, however, has had “negative implications for US strategy in the region,” in particular the strategy of:

“… supporting multiple pipeline routes on the East–West axis as a way of helping promote a more pluralistic system in the region as an alternative to continued Russian hegemony.”

But Russia’s Gazprom, controlling almost a fifth of the world’s gas reserves, supplies more than half of Ukraine’s, and about 30% of Europe’s gas annually. Just one month before Nuland’s speech at the National Press Club, Ukraine signed a $10 billion shale gas deal with US energy giant Chevron “that the ex-Soviet nation hopes could end its energy dependence on Russia by 2020.” The agreement would allow “Chevron to explore the Olesky deposit in western Ukraine that Kiev estimates can hold 2.98 trillion cubic meters of gas.” Similar deals had been struck already with Shell and ExxonMobil.

The move coincided with Ukraine’s efforts to “cement closer relations with the European Union at Russia’s expense”, through a prospective trade deal that would be a step closer to Ukraine’s ambitions to achieve EU integration. But Yanukovych’s decision to abandon the EU agreement in favour of Putin’s sudden offer of a 30% cheaper gas bill and a $15 billion aid package provoked the protests.

To be sure, the violent rioting was triggered by frustration with Yanukovych’s rejection of the EU deal, along with rocketing energy, food and other consumer bills, linked to Ukraine’s domestic gas woes and abject dependence on Russia. Police brutality to suppress what began as peaceful demonstrations was the last straw.

But while Russia’s imperial aggression is clearly a central factor, the US effort to rollback Russia’s sphere of influence in Ukraine by other means in pursuit of its own geopolitical and strategic interests raises awkward questions. As the pipeline map demonstrates, US oil and gas majors like Chevron and Exxon are increasingly encroaching on Gazprom’s regional monopoly, undermining Russia’s energy hegemony over Europe.

Ukraine is caught hapless in the midst of this accelerating struggle to dominate Eurasia’s energy corridors in the last decades of the age offossil fuels.

For those who are pondering whether we face the prospect of a New Cold War, a better question might be – did the Cold War ever really end?