By  Nicholas Hautman
US Weekly

Kanye West “was having nightmares” about his wife Kim Kardashian‘s terrifying Paris robbery in the weeks before he was hospitalized for exhaustion, a source close to the rapper exclusively tells Us Weekly.

“He’s been shaken up ever since the robbery in Paris. It did a number on him as much as Kim,” the insider tells Us. “The mere thought that anything could happen to her sent him in a tailspin. He wasn’t sleeping and he was having nightmares about it.”

As previously reported, West, 39, was admitted to Ronald Reagan UCLA Medical Center on November 21 after an incident at his personal trainer’s home in Los Angeles. TMZ reported that West was behaving “erratically” and was “handcuffed to a gurney during the transport to the hospital.” The news of the health scare came hours after West canceled the remainder of his U.S. tour, which Kardashian, 36, often attended before (and occasionally after) the robbery.

“He really couldn’t do his shows without her around,” the source explains. “That’s what made him worse. He didn’t want to be away from her … [The robbery] was just as hard for him, but he tried to keep going. He would never have canceled the tour unless things were bad.” 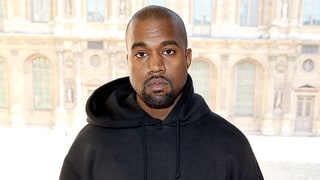 Kanye Will Not Be Released From the Hospital Yet
Kim K. Is Sleeping by Kanye’s Side in Hospital, Feeding Him
Kim, Khloe K. Bare Their Butts for Racy Yeezy Shoot: Pics

The “Fade” rapper is putting everything on hold and focusing on moving past his wife’s October 3 raid, in which she was robbed of more than $10 million in jewelry while tied up and held at gunpoint inside her private residence in Paris.

“The robbery triggered everything,” the source says. “Kim is his family and the only family he really has now. They took him in and embraced him. So seeing Kim traumatized did a major number on him.”

An insider previously told Us that the Keeping Up With the Kardashiansstar has been nursing her husband of two years back to health, sleeping by his side at the hospital and helping to feed him. “Kim has been amazing,” the source said. “She knew he couldn’t keep going the way he was. She has been by his side through all of this.”