Disclaimer: This article contains allegations regarding what has come to be known as the #Pizzagate scandal. These allegations have not been proven and the evidence below is circumstantial but damning nonetheless. Our site has already been suspended and shut down based on a copyright claim over a screen capture of one of the Instagram posts originally contained in this article. We were forced to delete said screen capture from our servers in order to get our site restored. 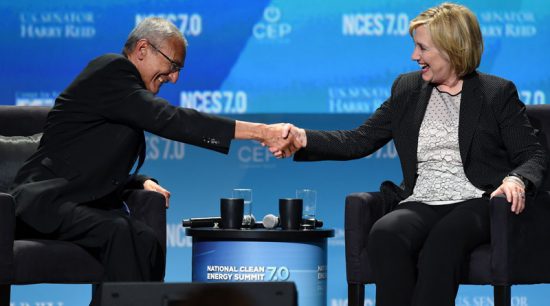 To start, we at The Daily Sheeple would just like to note that this is one of the most horrible things we’ve ever had to report on.

For those of you who thought John Podesta was just some nerdy UFO-researching Clinton campaign chairman with a nasally emasculated voice, you might want to think again.

Not only do the Wikileaks emails show that he is being invited to satanic ritual dinners, but he and his fellow trolls have been talking in code about something that people feel is much more sinister and disgusting.

Before you continue reading this, we want to warn you that the information you are about to see cannot be unseen.

Now, if you didn’t realize it was a code, you would just think that Podesta and Co. are simply obsessed with pizza. They talk about it all the time. 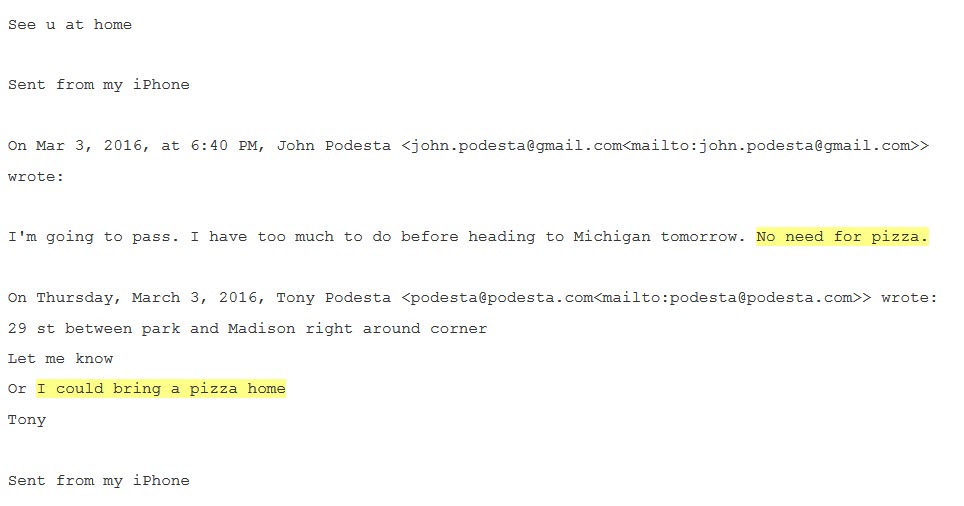 But then it starts to get a little weird… 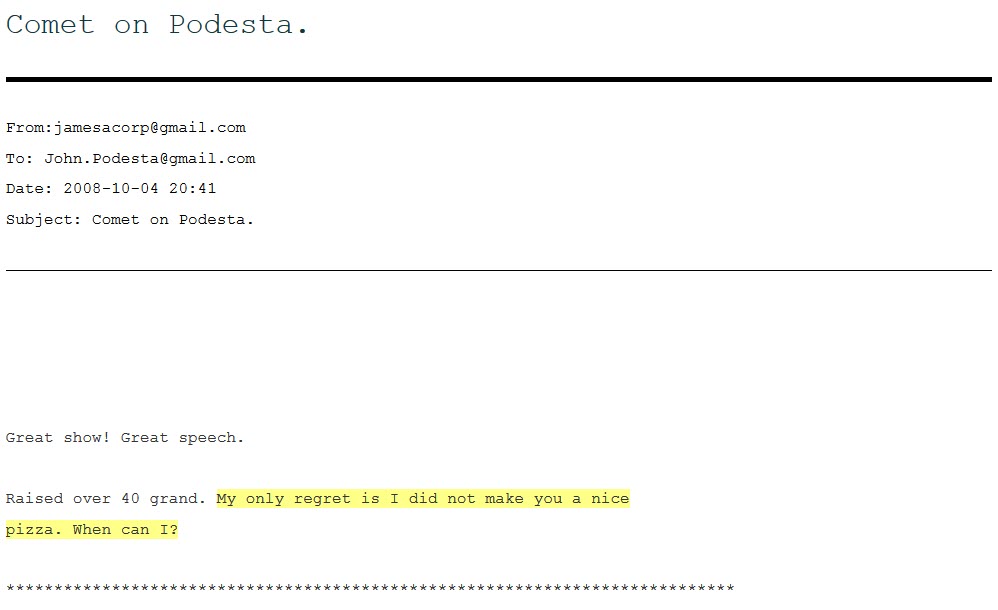 Or, how about this? 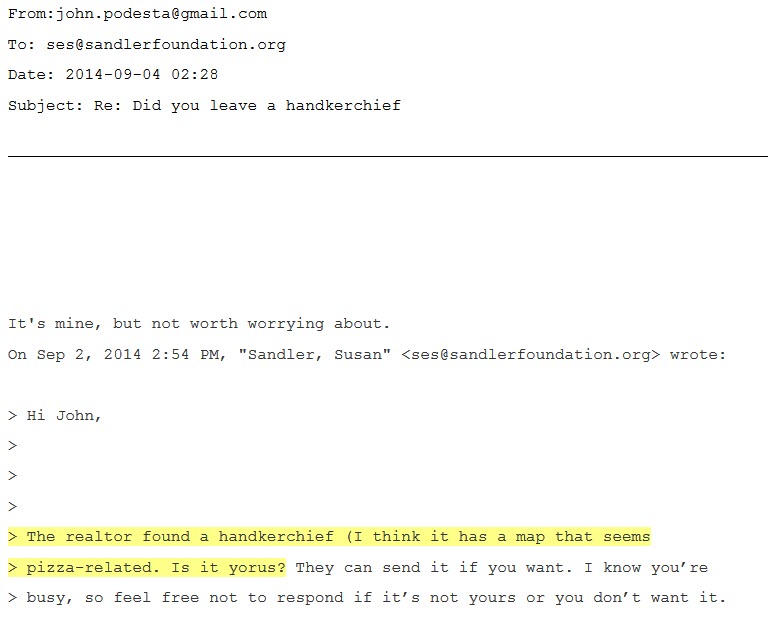 Why would someone have a “pizza-related map” on a handkerchief?

Well, as it turns out according to Anon reports and others, pizza doesn’t actually mean the food.

It is apparently a code word in pedophile rings for young girls. Handkerchiefs have long known to be code for sexual fetishes to the point that Wikileaks even has a whole entry about it. 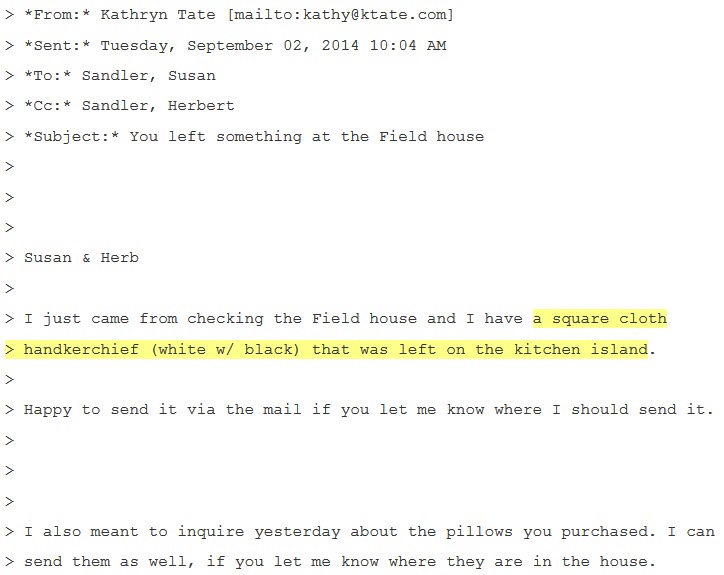 Again, if you didn’t know what you were looking at, you might read this and think that these extremely rich and influential people are just obsessed with pizza, a food typically aligned with a cheap, greasy dinner eaten by people who can’t afford healthier, more expensive food… or a favorite of kids the world over. We’re otherwise talking about people that can obviously afford to eat much better than pizza, right?

In fact, a lot of the seemingly innocent words that these people talk about in ways that make no sense on the surface in these emails are actually thought to mean something much more disgusting:

Curious if there was a “map” or two left on this “pizza” – sad we suspect! You can’t make this sick stuff up!#podestaemails28

Puts a whole new spin on how “cheese,” “pasta” and “pizza” are discussed say in this email here: 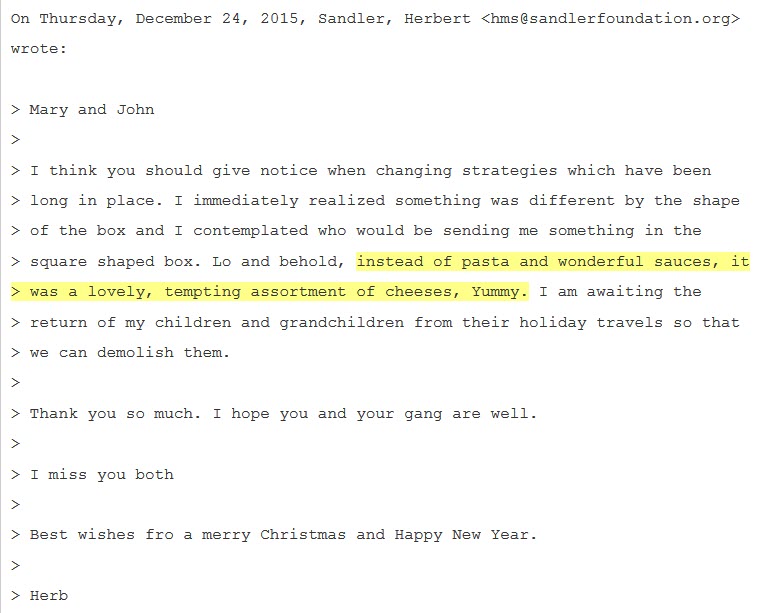 Still think it isn’t true? Then explain what this P.S. means: 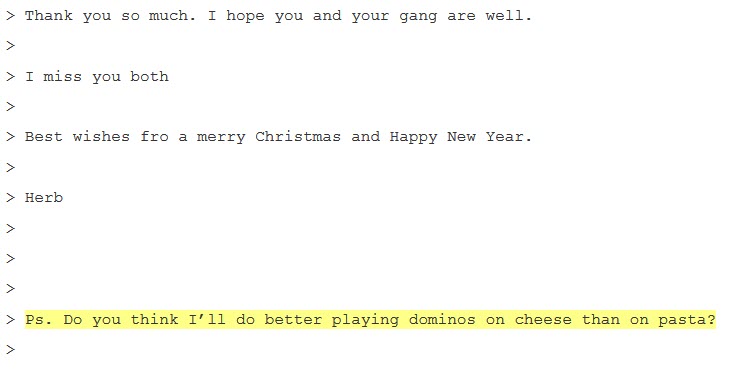 Does that sentence even make any sense at all? Not outside of the context of a secret (and depraved) code, it doesn’t.

The code above also calls into serious question the weird language in a STRATFOR email about Obama’s private $65,000 party to fly in pizza/dogs from Chicago and that they “assume we are using the same channels”.

Uh oh. Obama speding $ 65 000 on “flying in pizza/dogs”.
What ???
That is not pizza folks. This sounds really disturbing. #PodestaEmails28

Hot dogs are mentioned a lot as well. Another email to Podesta subject line “man, I miss you” says “I’m dreaming of your hot dog stand in Hawaii”: 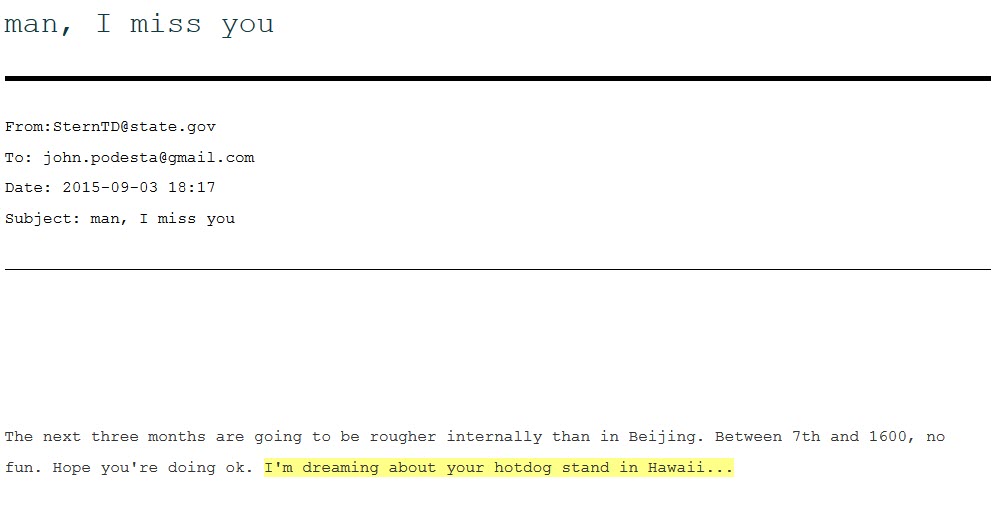 Again, a weird thing to say regardless but much more sinister when the code above is applied.

One particular pizza place has been host to so much sickening evidence that it cannot go ignored.

According to an Anon source that did a lot of digging, this guy James “Achilles” Alefantis, owner of the DC-based pizza parlor Comet Ping Pong who has been referred to as the “Achilles heel of the Clinton campaign,” has ties that go straight up the chain to Obama, Soros, and Hillary herself and it would appear according to this evidence there is something going on at his restaurant that is far beyond people eating dinner.

Alefantis is the romantic partner of former Hillary Super PAC Correct the Record director and founder of Soros-connected Media Matters David Brock. Hillary has held fundraisers at Alefantis’ place, and Alefantis has visited the White House on several occasions. He seems to be a pretty big deal for the mere owner of a pizza parlor.

How big of a deal? Alefantis is listed as the 49th post powerful person in Washington DC. Why?

You tell us. His pizza parlor is located less than five miles from the White House and on a block where the majority of the properties are owned by Clinton-connected groups: 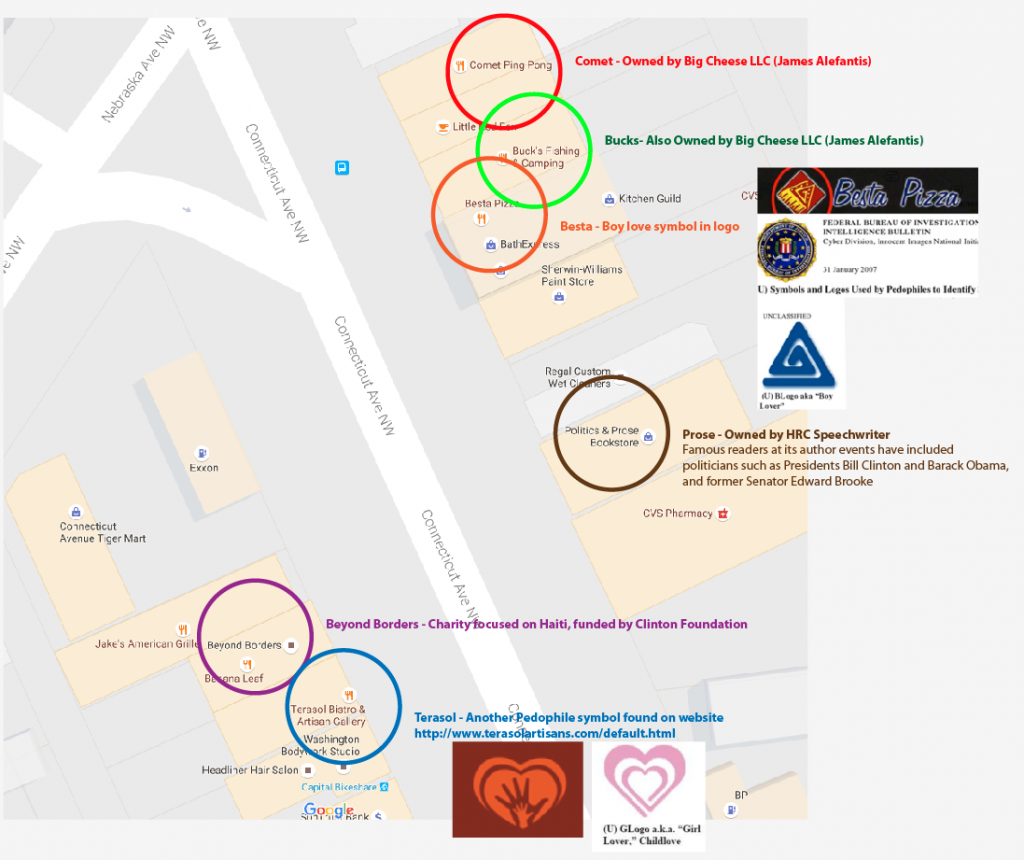 It’s also right down the street from Besta Pizza, another suspect restaurant with a logo (seen above) straight out of the FBI handbookregarding known symbols used by pedophiles to refer to “boy love”.

As pointed out on IWB, although Comet Ping Pong describes itself as a “family place for parents and their kids,” Alefantis himself has made more than a few references online that appear to be joking about pedophilia. After this information was made public, Alefantis made many of his social media posts private, but many have been archived.

There have been references to his parlor having secret rooms (above) including creepy pictures of rooms like this one. Alefantis makes lots of references to sex and pizza on social media, and his “jokes” (below) involve pictures of couples having sex on pizza slices and things like taping a little girl down to a table with a man standing behind her, talking about how it’s a “hilar” (as in, hilarious) new seating area for the restaurant’s “youngest guests”. 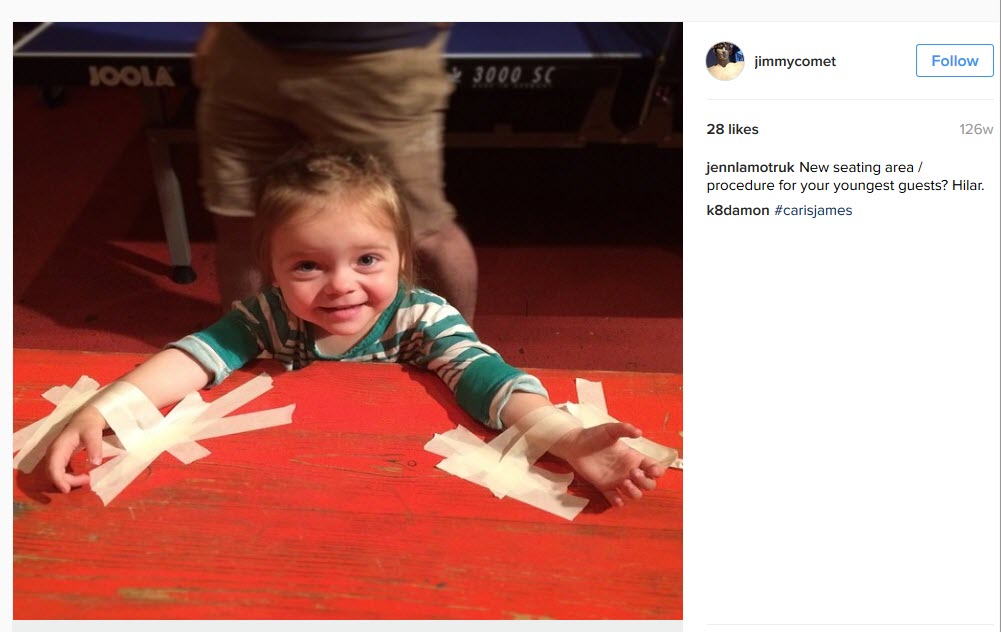 The whole thing gives a whole new meaning to posting pictures of half naked men giving the thumbs up to a guy wearing a shirt that says “I love children” in French: 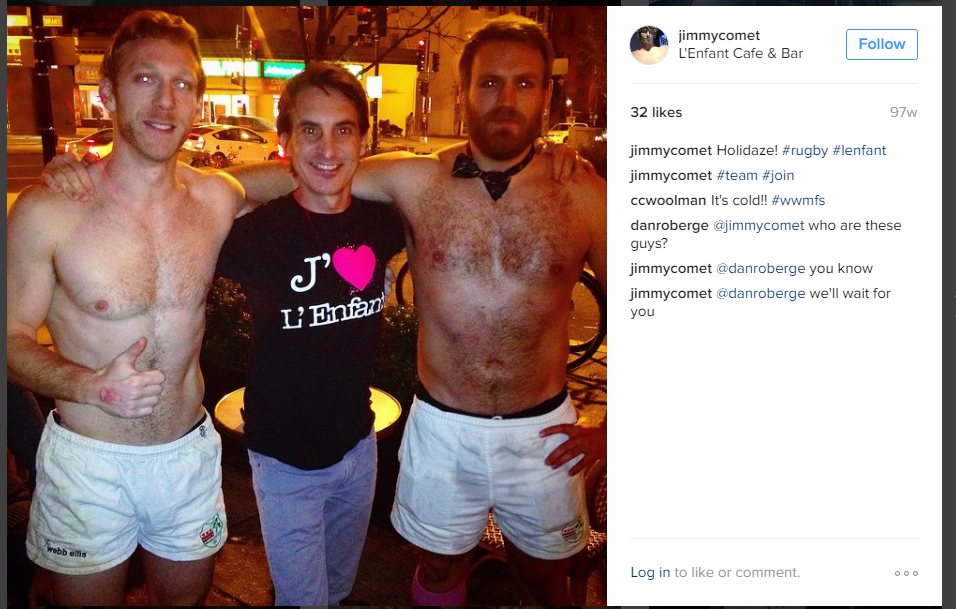 Or this picture of what appears to be underage teens participating in some sort of Eyes Wide Shut-esque ritual: 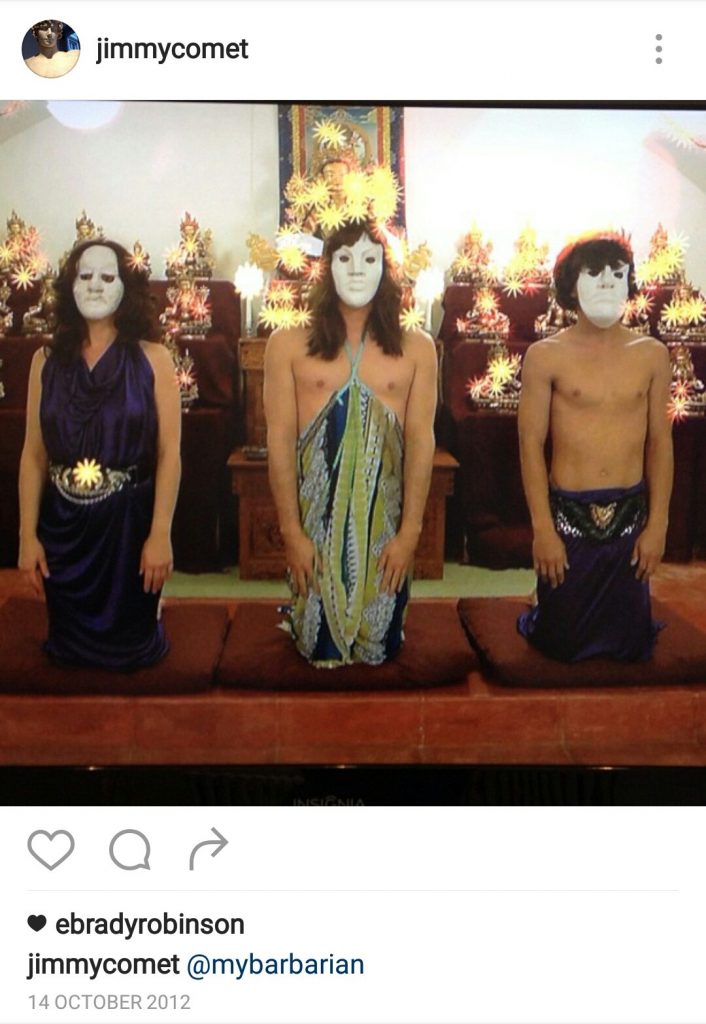 Here’s a really disturbing poster (especially in this context) for a band playing at “family-friendly” Comet Ping Pong. 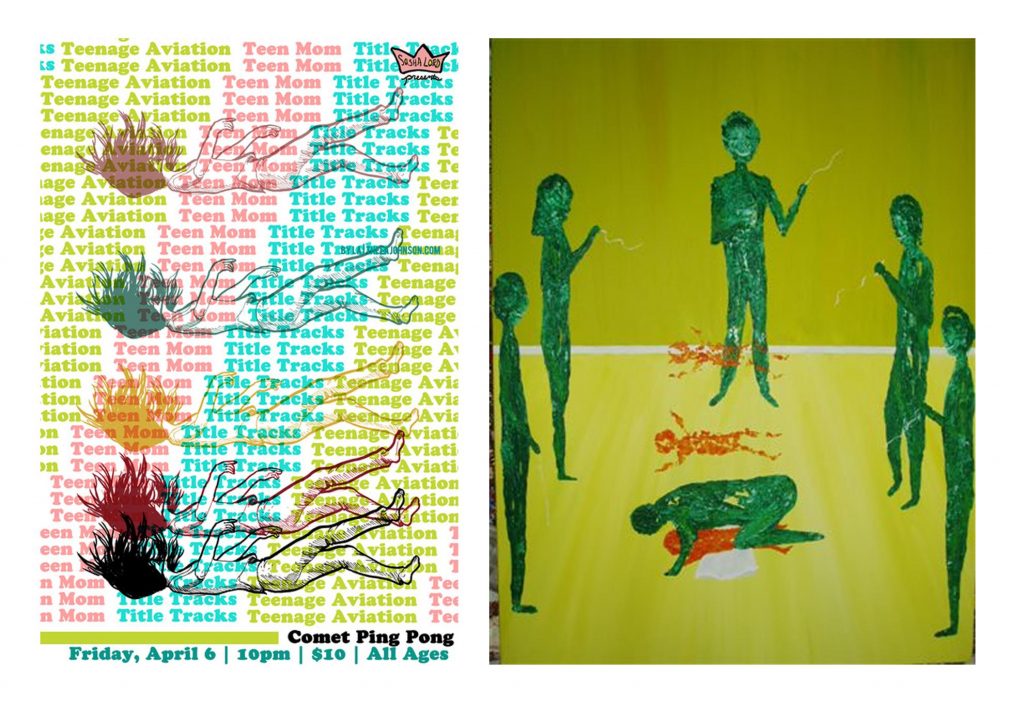 In fact, it just gets more and more disturbing from there. Examples of this go on and on, links can be found here.

If that’s not enough, here is some creepy footage from an “event” held at the restaurant:

All of this puts a whole new meaning on a “joke” logo Alefantis sent to John’s brother Tony Podesta for Hillary’s “pizza party” which he actually referred to as “Pizza for the Party,” not “pizza party”…

In the email to Tony Podesta, considered by some to be the most powerful lobbyist in DC, Alefantis requested that the logo not be forwarded, subject line “ha”.

Look at what the arrow in the logo Alefantis doesn’t want forwarded is doing to the pizza.

So this is a place where they have occultic art/music performances, lots of high-powered people in high places, and yet, they also host kid sleepovers?

NOTE: A guy who posted an image of four young children and mentioning a “double sleepover kickoff at Comet Pizza” that appeared to have been taken in the restaurant has filed a copyright against our site and it was temporarily shut down. Although it is a screen capture of an Instagram post, not the original image itself, and it should fall under fair use, we have been forced to take the image down and delete it completely from our server to get our site restored. The claim came from a third party and went directly to our hosting company over the weekend, and within 72 hours our site was down… again, over a screen capture of an Instagram post.

We warned you this stuff can’t be unseen.

Here is Alefantis with Tony Podesta: 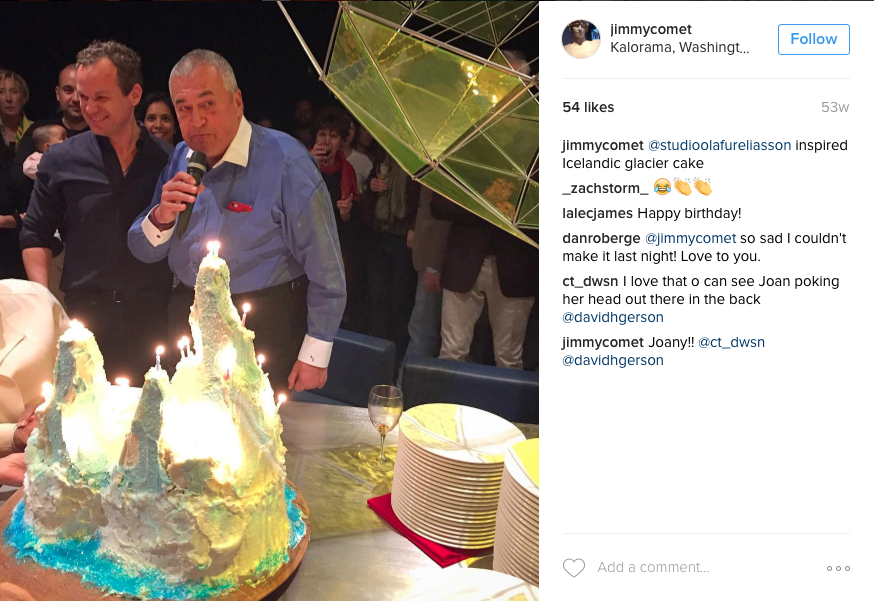 Sometimes they celebrate with flaccid penis cakes (note the hashtag): 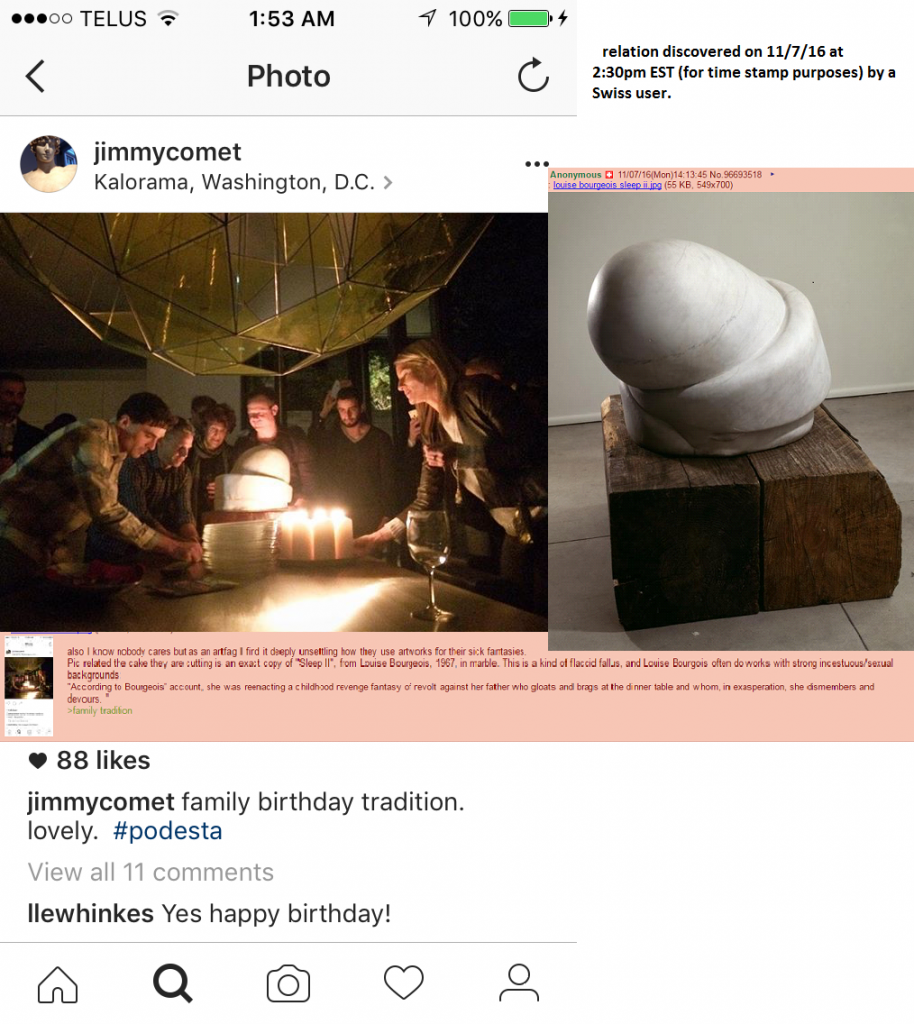 Tony Podesta, by the way, is also the guy who displays art in his house that imitates the poses that pedophile serial killer Jeffrey Dahmer put his victims into (note, this picture of Tony Podesta’s “art”/house was posted on Instagram by Alefantis himself — 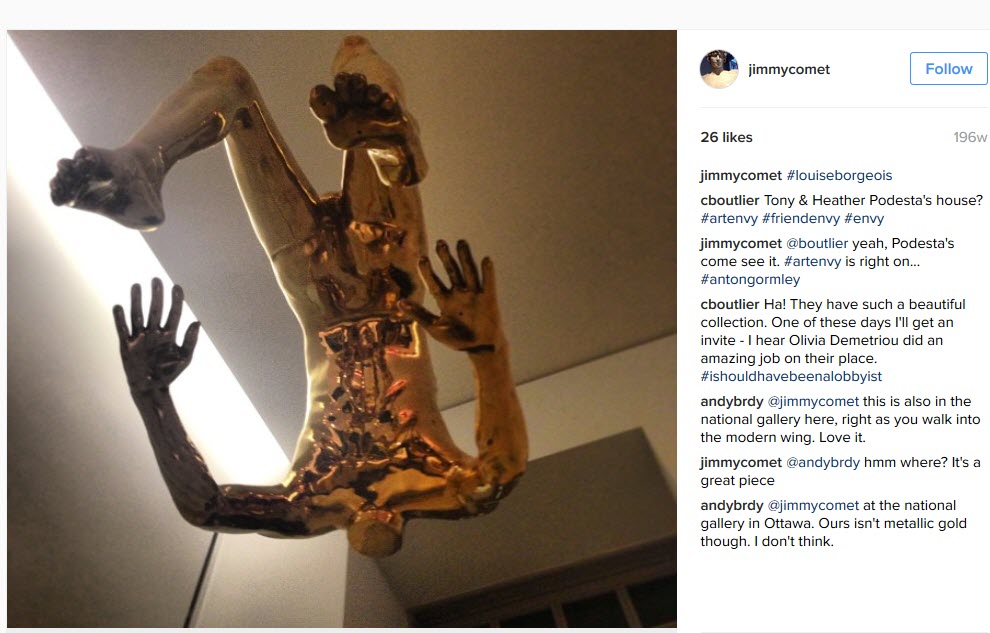 — in addition to paintings of what some say are little kids in their underwear being abused:

Art by biljana djurdjevic, a fav of tony podesta, bro of @johnpodesta as told here:http://washingtonlife.com/2015/06/05/inside-homes-private-viewing/ …#SpiritCooking

On top of that, in a since-removed WAPO article, it detailed that:

“Folks attending a house tour in the Lake Barcroft neighborhood in Falls Church earlier this year got an eyeful when they walked into a bedroom at the [Tony] Podesta residence hung with multiple color pictures by Katy Grannan, a photographer known for documentary-style pictures of naked teenagers in their parents’ suburban homes.”

His brother John has interesting taste in art as well, with a picture of cannibalism hanging on the wall in his office.

What is this creepy ritual artwork in John Podesta’s office? #SpiritCooking

We cannot continue down this dark rabbit hole or we won’t be able to sleep at night. In fact, there are actually posts about people on social media crying after reading through some of these disgusting Wikileaks revelations.

No matter how disgusting this information is, the worst part is that it is just the tip of the iceberg as many in the alternative media have known for years now. It’s just that the proof has never been so abundant before.

So many things that were once thought conspiracy theory have been proven true by the Podesta Wikileaks revelations. Sure, we thought we knew, but we must admit that the world is a much darker place than it was before 2016.

Things like this are why the blue pill in the Matrix movies actually sounds good. Let’s hope they’re all just referring to pizza, the food, and nothing more.