Tonight’s debate proved that the obituaries for Donald Trump’s campaign were…premature. No matter how the media tries to spin this, Donald Trump won hands down.

He did it by doing exactly what I predicted he was going to have to do:

Here’s how Trump wins if he’s learned from the first debate. He has to ignore the agenda that has been set up and calmly but clearly attack Mrs. Clinton where’s she’s vulnerable; on the e-mail scandal, the Clinton Foundation, her enabling of her sexual predator of a husband, and her repeated lies to the American people. He will, if he’s smart ignore the ‘moderator’s’ attempts to shush him and have some nice one line zingers of his own to respond to Mrs. Clinton. If he gets questioned about the twelve year old illegally leaked ‘sex’ conversation, he should respond that he’s already addressed that, and compared to the problems facing the country and compared to Mrs. Clinton’s history on women and her plan to allow thousands of unvetted Muslims into America, this is a non-issue.
In other words, he has to upset the carefully planned script Mrs. Clinton and the ‘moderators’ have arranged, go off script and tie things to his own talking points and agenda at every opportunity.

Like I said, the Donald’s a quick learner. That’s exactly what he did.

The two ‘moderators’ Anderson Cooper and Martha Radatz are partisan Democrats who did their very best to push Mrs. Clinton over the line. They allowed her to filibuster and go over her time and then refused to let Trump respond, something he pointed out live and on the air. They interrupted him far more than Mrs. Clinton, and more important than the number of interruptions was where they occurred. But their efforts were not as effective as they wanted them to be because Trump simply wouldn’t meekly follow their script. His answers always went back to his points he needed to make; Hillary’s e-mails, the Iran Deal, her serially corrupt behavior, her  being owned by the special interests, the failure of ObamaCare and her dishonesty.

One of the sweetest moments was when Hillary Clinton accused Donald Trump of lying about her e-mails and the audience actually laughed at her. And a few moments later, after the Donald said that as president he would consider appointing a special prosecutor to investigate the e-mail scandals and the Clinton Foundation, Mrs. Clinton cracked, “Well, it’s lucky Donald Trump isn’t in charge of law enforcement, ”  Trump responded with the best zinger of the night, one that will stick in everyone’s head:

“Or you’d be in jail.” It got the biggest applause and cheers of the night, and the two ‘moderators’ had to work hard to shush it.

Donald Trump reminded America of exactly whom Hillary Clinton is, who she’s owned by and her disgraceful record in public service. He disposed of the issue of that illegally hacked private conversation quickly and efficiently even though Anderson Cooper  and Martha Radatz did their best to keep that ball in the air.  After saying he apologized twice, he reminded us all that words are one thing and actions, like the serial behavior of  Bill Clinton and his enabler Mrs. Clinton is something quite different…with Kathleen Willey, Paula Jones and other  victims or the Clinton sitting right in the front row where they couldn’t be missed. 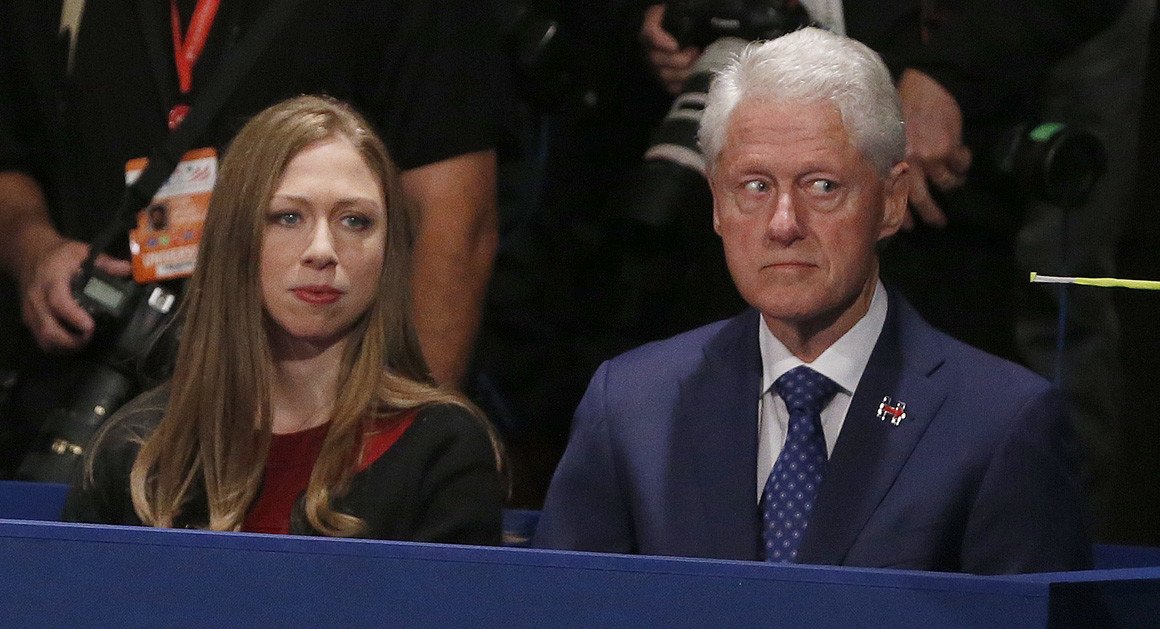 This is actually very much how Trump operates. In the first debate, he avoided going there because Chelsea Clinton was sitting there and he felt it was the wrong thing to do. When the Clinton media illegally obtained and made political capital out of a locker room style conversation Trump had with George W. Bush’s nephew Billy 12 years ago, Trump had no compunctions about hitting back, and he did so effectively.

Trump’s victory tonight is even more impressive because it was a comeback and as Trump himself said, “It’s three against one.”

This wasn’t how this was supposed to go at all, but the very fact that it focused on issues because of the questions gave Donald Trump an advantage they didn’t foresee. And not only did  he rise to the challenge, he did it in a calm, presidential manner.

Even better, this was Hillary’s last chance to put Trump away. The last debate will be ‘moderated’ by FOX’s Chris Wallace, who’s a Democrat but one who will at least try to ensure a modicum of fairness.

Team Clinton’s only weapons left are voter fraud, their pet media and renegade ‘conservatives’ and Republicans.  After tonight, America has a clear picture of the candidates.

To steal a phrase from Powerline’s John Hinderaker, some of the rats might want to consider returning to the ship.

What do you respect about each other?

HRC; I respect his children. Granny Cankles! blames Trump for divisive rhetoric. Claims she has tried to ‘get away from the personal.’ Ri-ight.

Trump: Thanks Hillary for compliment. Respects Hillary as a fighter.

Wants to bring good blue collar jobs BACK TO AMERICA!

HRC: Claims Trump is using Chinese steel…doesn’t mention that US made steel is scarce and more expensive thanks to EPA regs.

Trump: I want to about Judges like Scalia. Judges who will respect the Constitution, 2nd amendment.

Trump mentions Benghazi and the 3AM phone call Hillary ignored.

I can’t believe Cooper just ask HRC if she thought Trump would be a disciplined leader! What a tool.

To the inner cities.

Trump points out that Hillary and the Dems have done NOTHING. Mentions the ‘deploreables’ quote when asked in he will be president to all the people.

Hillary doesn’t really address the question, just cites the usual treacle. Blames Trump for increase in bullying! Mentions tone and tenor which she blames Trump for, of course.

Trump replies  that Hillary has had a real part in the divisiveness.

Raddatz asks Hillary if she would use U.S. forces to save the ‘rebels.’ Yeah, she would . Doesn’t really address Trump’s points.

Will they let him respond? Let’s see.

Nope, Trump gets shushed. He points out that they let Hillary go a full minute over her time but keep cutting him off. It’s obvious…

Syria is the topic now. Hillary just lied about Aleppo. Those ‘rebels’ she talks about are al Nusrah, an al-Qaeda affiliate.

Trump’s response is excellent. He points out who these rebels are and that Russia, Assad, and Iran are killing ISIS. Mentions the Iran deal. Mentions how we now broadcast our strategy, which is stoo-pid. Says he wants tpo get along with Russia to fight ISIS.

Trump gets a laugh from the audience when he said ‘if you were an effective senator, you would have done something about these abuses you claim you want to fix.’

Hillary gets a long filibuster on her record…Trump is not allowed to respond.

Hillary is now talking about how she closed corporate loop holes, spouting the same garbage OBama did about ‘exempting anyone make $250K per year.’ I guess we saw how that worked out. Basically, she’s into ‘eat the rich.’

Trump admits he took a loss and used it…and makes the point that Hillary isn’t going to do anything about stuff like that because the people taking advantage of the tax code are her donors.

Oct 9, 18:55
Good reply from Trump on how he’d reform the tax code and cut them on the middle class and across the board, and that Clinton will RAISE them. True, that.

Hillary Clinton is now lying about herWikileaks quote ‘You have to have a public and a private position.”

And now she’s playing the Russian card, claims Trump is working with the Kremlin.

Trump gets the audience laughing about Hillary comparing herself to Abe Lincoln. Disposes of the Kremlin canard.

Trump isn’t letting the ‘moderators’ push him around, is insisting on equal time.

Trump handles the ‘Islamophobia’ vs. security well. Reminds everyone about recent terrorist attacks and that Hill and Obama won’t say ‘radical Islamic terrorism’

Mentions Kahn, lies that we’ve had Muslims in America since George Washington, usual platitudes. Will Trump bring up her Muslim Brotherhood ties? Accuses Trump of being a recruiter for ISIS.

Trump brings up IRAQ! Says Kahn would be alive if not for Clinton voting for Iraq war. Mentions Hillary’s saying she wants to bring in lots more unvetted Muslims. Pretty good.

Hilary admits that’s what she wants, but claims she’s going to have ‘better vetting’

Trump reminds everyone that Hillary started the birther issue.

Hillary’s response ignores the cost of ObamaCare. She actually said that Medicare works in spite of the vast fraud.

Good answer by Trump  to Cooper’s question about pre-existing conditions. ‘ObamaCare was a fraud.’

Those people on ObamaCare would have been on Medicaid anyway. Now, she’s lying about what a good thing ObamaCare is. Claims she can ‘fix it.’

Trump’s response: ObamaCare’s a disaster. ‘Their way of fixing it is to ask congress for more money.’ He explains in detail the right way to do healthcare. Competition, erasure of state lines, tailored plans.

They certainly got off the subject of the e-mails quick!
Brings up Wikileaks on Bernie Sanders..brings up deleted e-mails.

Says he will investigate Hillary if elected!!!!! YEAH!

Hillary gets laughed at by audience when she calls Trump a liar about e-mails.

Trump replies to wild applause -“Or you’d be in jail.

Hillary got a long response…but Trump isn’t letting her get away with it. Neither is the audience.

So Trump’s going there…Bill and Hill and their sexual abuse tag team…words and action, there’s a difference. Well done, Donald.

(applause, shushed by the moderator)

Hillary amazingly uses ‘they go low, you go high.’ Applause, not shushed by the moderators of course.

Notice how they tried to keep Trump from responding. But he refused to let them sandbag him…good.

Trump wisely points out that Hillary is allowed to bloviate but he’s being cut off.

Oct 9, 18:15
Hillary is digging into Trump’s suppossed denigration of women. Will Trump hit back?

Oct 9, 18:14
first Follow up by A Cooper..disposed of by Trump mentioning ISIS, etc. And back to his main points of national security and border security.

Oct 9, 18:09
Obama said the same thing…’I want to be everyone’s president, unite everybody.’