SOTN Editor’s Note:
While the following story may seem difficult to grasp, it’s now clear that there is more hedging going on in Washington than there is on Wall Street.

With that said there is something very wrong with Bill Clinton’s initiatives taken with convicted pedophile Jeffrey Epstein.  Exactly why was Bill Clinton logged on Epstein’s private jet — ‘Lolita Express’ — 26 times destined to his private pedophilia island, Little Saint James, located in the Virgin Isles?

Perhaps the answer lies in the following exposé.  SOTN has not been able to verify the accuracy of this story, but feel it may be true and soon to be seen how it may be.

Clinton Threat To “Destroy Everyone” Throws Washington Into Chaos

A stunning Foreign Intelligence Service (SVR) report circulating in the Kremlin today says that during President Putin’s “telephonic conversation” with President Obama yesterday, the American leader stated that Washington D.C. was in “political chaos” after former President Bill Clinton threatened to “destroy everyone” with his “blackmail files” should his wife, Hillary Clinton, be indicted for the crimes she committed against her own government and people. [Note: Some words and/or phrases appearing in quotes are English language approximations of Russian words and/or phrases having no exact counterpart.] 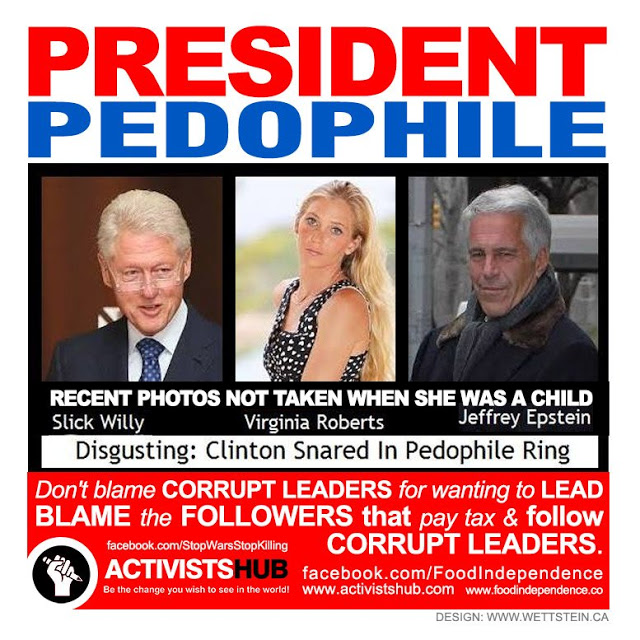 According to this report, President Putin was forced to personally call President Obama after Russian military commanders attempting to finalize a US initiated agreement regarding Syria proposed by the American leader last week had been continually rebuffed by the Pentagon—and that we reported on in our 4 July report titled “Prepare For War” Warns Russian Military, “Obama Is No Longer In Charge”.

Though the text of the exact words spoken between President Putin and President Obama during their call are of a higher security rating then this “general/common” SVR report allows, Russian intelligence agents contributing to it lay out a devastating timeline regarding the facts surrounding Hillary Clinton that shows:

1.)    The full knowledge that the Kremlin was in possession of all of the emails from Hillary Clinton’s private computer servers was allowed to be released to the public on 6 May—and which was confirmed this week by both the FBI and US experts.

2.)    President Putin, on 13 May, warning military commanders that if Hillary Clinton is elected to be the next US president “it means war”.

3.)    The Investigative Committee (SLEDCOM), on 19 May, opening a war crimes file against Hillary Clinton over her illegally obtaining millions-of-dollars in bribes from the murderous Saudi regime.

5.)    The SVR reporting, on 13 June, that Hillary Clinton had been linked to the Orlando murders of pop singer Christina Grimmie and nearly 50 gay pride celebrants in a false flag “massacre event”.

6.)    The SVR reporting, on 23 June, that former UN President John Ashe was discovered dead in his home by FBI agents who were going to escort him to testify in front of a grand jury probing Hillary Clinton. [Clinton body count rises]

7.)    The SVR reporting, on 28 June, that the US Supreme Court, in an unprecedented ruling, gave Hillary Clinton a “get out of jail free” card for the many bribes she received.

8.)    The SVR reporting, on 28 June, that former President Bill Clinton held a secretive meeting with US Attorney General Loretta Lynch where the final details were worked out for Hillary Clinton’s “total exoneration”.

9.)    The SVR reporting, on 30 June, that Hillary Clinton was going to retain US Attorney General Loretta Lynch in office.

10.)  The SVR reporting that on 1 July, the hacker known as Guccifer, who was able to obtain all of Hillary Clinton’s emails, was discovered missing from his US prison cell by FBI agents. [Potential rise of Clinton body count]

11.)  The SVR reporting that on 1 July, US Attorney General Loretta Lynch made a public statement that she would abide by the decision of the FBI Director James Comey as to if charges would filed against Hillary Clinton.

12.)  The SVR reporting that on 2 July, Hillary Clinton was interviewed by the FBI.

13.)  The SVR reporting that on 5 July, FBI Director James Comey delivered a nationwide address in which he detailed all of Hillary Clinton’s crimes relating to her secret emails—but then said he wasn’t recommending prosecution.

14.)  The SVR reporting that on 5 July, President Obama made a public appearance with Hillary Clinton just hours after FBI Director Comey’s exoneration of her stating that he was “ready to pass the baton”.

15.)  The SVR reporting that on 6 July, US Attorney General Loretta Lynch issued a statement that not only wouldn’t Hillary Clinton be charged with any crimes, none of her criminal accomplices would be either.

SVR intelligence analysts contributing to this report note that by the Obama regime’s exoneration of Hillary Clinton they not only nullified 6 US Federal criminal laws, but, also, disgraced the FBI and its once stellar reputation.

Also to be destroyed by Hillary Clinton’s exoneration, this report continues, is the United States reputation as being a nation of laws that apply to everyone equally—made especially damning in the light of China sending one its top politicians to jail for life for excepting bribes this past week, and Russia itself, also this past week, firing two of its top military commanders for the mere suspicion that they were negligent in their duties.

To why the Clintons have been allowed to continue their 25-year-saga of existing outside of the laws every other American has to live by, this report concludes, is solely due to the massive blackmail files former President Bill Clinton has compiled on numerous top politicians, bankers and elites (and has threatened to release if Hillary Clinton is ever charged) containing videos and photos of them having sex with child sex slaves kept by Jeffery Epstein—and that EVERY SINGLE American news media outlet knows about, but are too terrified to report on.

Editor Note: If anyone ever wanted to see a real life example of how the former Soviet Union selected its communist leaders, you couldn’t find a better example than what is happening with Hillary Clinton in America today. 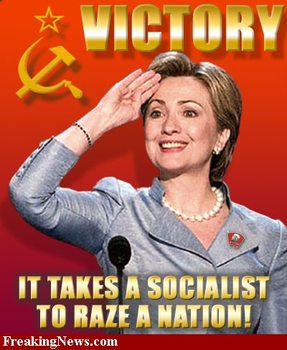 July 7, 2016 © EU and US all rights reserved.  Permission to use this report in its entirety is granted under the condition it is linked back to its original source at WhatDoesItMean.Com. Freebase content licensed under CC-BY and GFDL.