What if the current financial crisis was not caused by unforeseen random events, but was instead a carefully orchestrated assault on the US Dollar, designed to cripple the American economy and ultimately gain complete control of the world’s financial markets?

Sound far fetched? Then you need to read the facts contained in The Coming Financial Crisis..

This book is not some paranoid conspiracy theory, claiming the sky is falling. Written by a former banker, The Coming Financial Crisis. pulls back the wizard’s curtain, to reveal who is currently running the show (not who you’d expect) and explains where we are headed. 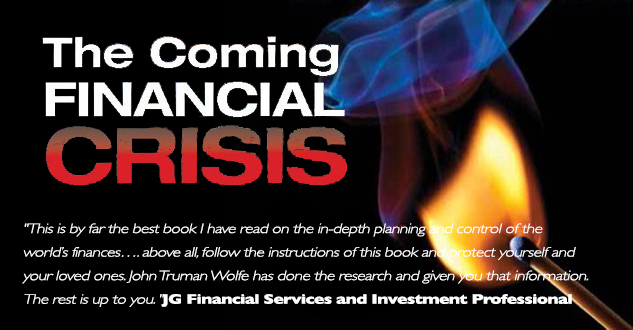 Anyone who is affected by the present financial crisis needs to know the truth and be able to plan for the future, to avoid personal catastrophe.

“One can’t act intelligently without information on which one can depend. The recent financial crisis demands action. Wolfe cuts right through all the noise, naming names, places, events—all highly relevant. A riveting and must-read if one is to regain control in an out-of-control state of affairs.”  — T. Carr

To avoid being financially crippled by a further weakened dollar and the loss of all your assets’ value, you need to know :
• Where this financial crisis started.
• The history of sub-prime mortgages and the intentional collapse of the housing bubble.
• Who runs the mysterious ‘Bank for International Settlements,’ located in Basel Switzerland? (Hitler’s Bank is alive and well.)
• How can 19 men control the financial affairs of the whole world? Is that possible?
• How will this private, international bank affect you?
• What can the US Congress do to reverse the problem and prevent future economic take-overs?
• What steps can you personally take to insulate yourself from further lost value of the dollar, loss of your valuable assets and protect yourself from run-away inflation?

Where can you get all this vital information that is clear, concise and easy to understand? All you need to do, is read The Coming Financial Crisis.  A book that reveals the root causes of the worldwide economic crash, why it happened, where it is headed and what you can do about it.

“This is the most PLAUSIBLE explanation I have seen and the most OUTRAGEOUS! You show how & to whom America has been sold out.”       — Dr. H. Burnham

Whether or not you accept the idea that the financial crisis was created for the purpose of replacing the United States and the U.S. dollar as the stable point in international finance with a global financial dictator and a new world currency, this scenario—set forth in this book—is now in full swing.