LAKE ISABELLA, Calif. — Near this man-made lake about 45 miles northeast of Bakersfield, a 2-acre fire has grown to an inferno that stretches over 46 square miles, killing two people and destroying at least 100 homes and other structures.

The frantic effort to control the raging Erskine fire in the southern Sierra Nevada has drawn firefighters and emergency crews from across the state to the rural towns along the southern part of Lake Isabella.

The blaze’s path has been marked by ruin: charred fields, burnt-out cars, exploded propane tanks. The flames leveled homes — save for their brick chimneys — and at least three firefighters have been injured. Gov. Jerry Brown issued a state of emergency for Kern County.

Late Friday, as officials announced that the fire was only 5% contained, firefighters were focused on defending the rural Kelso Valley and the remaining cluster of towns near Lake Isabella, trying to stop the blaze from its eastward march despite the challenges posed by summer weather. 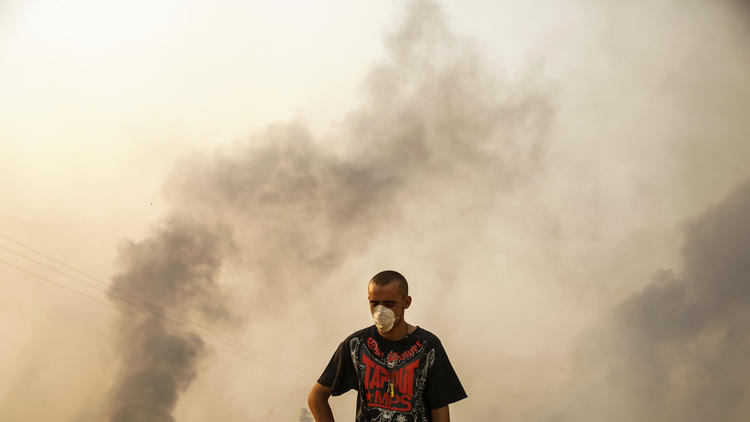 “It’s hot. It’s dry. It’s windy,” Kern County Fire Capt. Tyler Townsend said, calling it a trifecta of forces that have made the area ripe for a wildfire. “If you haven’t evacuated yet, be ready to go at a moment’s notice.”

From there, wind pushed the blaze up steep, rugged terrain and over a ridge, down toward Squirrel Mountain Valley and its neighboring town, Mountain Mesa, located along State Route 178. The highway runs near the southern rim of the lake and is the recommended evacuation route.

“It was insane,” said Linda Good, who lives near the spot where the fire began and watched the flames race over the mountain ridge. “It just shot up.”

At Kern Valley Hospital in Mountain Mesa, on the other side of the ridge, the plumes of smoke came first. Then, within minutes, 10-foot flames were at the hospital’s doorstep, according to Bob Easterday, facilities director for the hospital.

“My maintenance guys were fighting the fire with hoses,” he said, because firefighters just couldn’t keep up as the fire leapfrogged terrain. 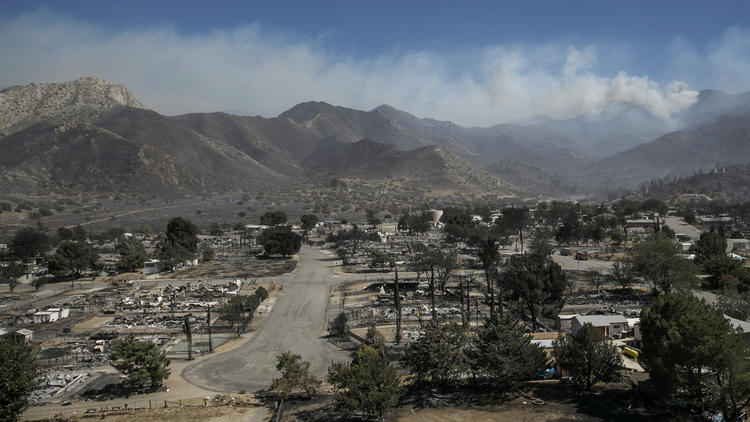 The wildfire still rages in the mountains after flames raced through a South Lake neighborhood. (Marcus Yam / Los Angeles Times)

The fire was burning so fast, “it literally blew right past the hospital,” hospital CEO Timothy McGlew said. “The only thing I can call it is a miracle” that no hospital structures were damaged.

The blaze swept across 11 miles in 13 hours while firefighters raced to try to protect neighborhoods, fanned by winds that reached gusts of up to 40 mph in the higher ridges. Tall grass that was nourished during this winter’s El Niño rains had dried in the spring and provided plenty of fuel, said Townsend, the fire captain.

“Embers were being carried into the wind,” Townsend added, describing how the blaze roared forward.

If we allow people to go back into their homes, we can’t make them leave. If that fire shifts, we’re going to have more casualties.— Kern County Sheriff Donny Youngblood

Brian Marshall, the county fire chief, said the firefight was overwhelming: “There’s not enough firetrucks and firefighters to put in front of every structure.”

In the hours since the Erskine fire took off, aerial teams have dropped retardant on ridgelines and more than 800 firefighters have arrived, clocking long hours. Additional resources were expected late Friday from out of state.

“There are some who have been working on this fire for two days with minimal breaks,” said Townsend, adding that firefighters would soon move to rotating 12-hour shifts. 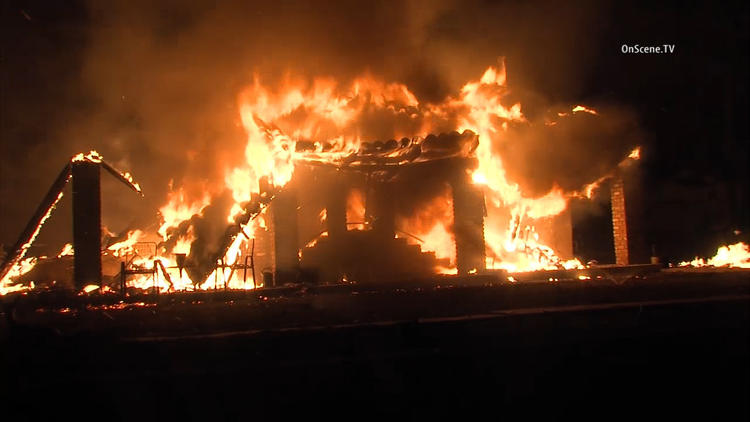 Dozens of homes burned Thursday evening in a fast-moving fire that broke out in a rural area of Kern County, the most destructive blaze in a week of brush fires across Southern and Central California.

The cause of the fire is under a criminal investigation.

Residents who live close to where the fire originated claimed they saw one or two men around where the flames ignited. Barbara Harper, 71, said she spotted the flames near her yard, called 911 and waited 10 minutes for firefighters to show up.

“By then the fire was out of control,” she said. “It was a fast fire.”

But Harper said she saw two young men running away from the flames and into a nearby gully. She alerted the Sheriff’s Department, and deputies said they would contact her in two days. 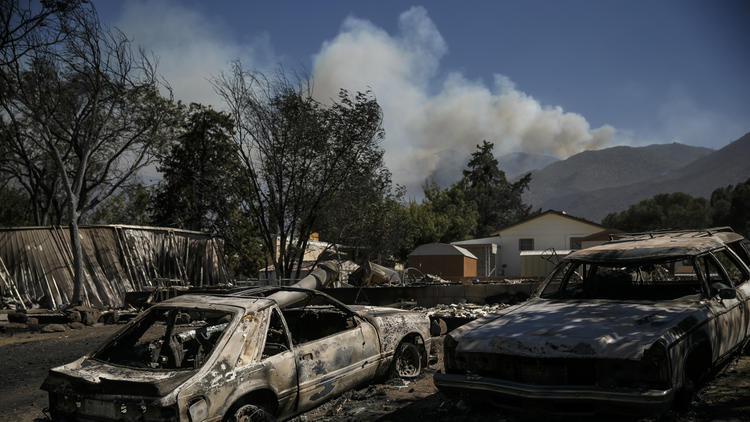 Kern County Sheriff Donny Youngblood said he was unaware if anyone had been detained or arrested at the site. Arson investigators were surveying the area where the blaze began, near the Kern River Archers field, where a burn area was enclosed by yellow police tape.

The two people who died in the blaze have not been publicly identified. Authorities said the two were found together and succumbed to smoke inhalation.

It’s unclear if there are others who also died, and sheriff’s deputies planned to use cadaver dogs to search for any additional victims amid the rubble.

Several hundred people have been evacuated from the affected communities, with up to 40 deputies swarming neighborhoods and moving door-to-door to ask residents to leave.

“The problem is, this fire keeps shifting,” Youngblood said. “If we allow people to go back into their homes, we can’t make them leave. If that fire shifts, we’re going to have more casualties.”

Residents worried about the fate of their houses and keepsakes, left behind as they hastily fled. The rumor of bandits looting the swaths of abandoned homes sent fear through Diane Cathcart.

“Where are the police? Who’s up there making sure our things aren’t being robbed?” she wondered late Friday. “Anyone could be walking into our homes.”

Others, such as Leslie Wilson, fretted over routine medical needs that were thwarted by the evacuation.

“My husband needs medication for his heart,” said Wilson, who lives in Squirrel Valley. “I don’t know where to go.”