Kissinger Delivered a Plan for a New World Order to Putin

Posted on February 9, 2016 by State of the Nation
Translated by Ollie Richardson for Fort Russ
9th February, 2016
fapnews
. 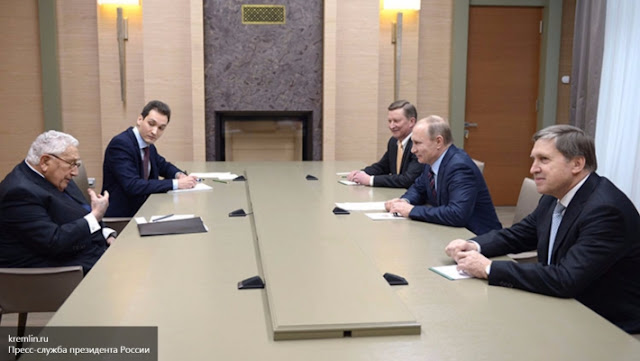 –
Henry Kissinger is one of the “bisons” of American politics. One of those who ruined the Soviet Union. It was he who put in a lot of effort to finally tear China away from the USSR and thus, weakening the latter. He is a patriot who put himself on the altar of victory in the “cold war”. Even after retiring, he did not give up on the battle throughout his life. He continued to struggle with the remnants of the Soviet Empire.

Four years ago, speaking about “the drums of war”, which could already be heard, he said:

“The coming war will be so severe that only one superpower can win, and that’s us. That is why the EU is in such a hurry to form the superpower, because they know what is coming, and to survive, Europe will have to be one whole cohesive state. This urgency tells me that they know what to expect from us. Oh, how I dreamed of this delightful moment. From the ashes we shall build a new society, there will remain only one superpower, and it will be the global government that wins. Do not forget that the United States has the best weapon, which no other country has, and we will introduce those weapons to the world when the time is right”. (Henry Kissinger January 2012).

On January 20th 2012, he arrived in Moscow to give Vladimir Putin an ultimatum and “friendly advice” not to run again for President of Russia. Because otherwise the U.S. will grind Russia into powder: “the third term of Vladimir Putin, this is a war that Russia will lose”.

It’s already been four years. On February 3rd 2016, Russian President Vladimir Putin received the former U.S. Secretary of State in his suburban residence in Novo-Ogaryovo. Like the previous encounter, what they said is not known. It is clear that Kissinger arrived on very important business that cannot be trusted with Victoria Nuland, nor Barack Obama.

The visits of Henry Kissinger to Moscow have recently become quite frequent. He came twice in 2013 (spring and autumn), most likely trying to convince Russia to withdraw from Ukraine.

His opinion and the opinion of his circles that he is in (the clan of the Rockefellers) is often ignored by the top political leadership of the US, which has become a cause of many geopolitical defeats of Washington. Henry Kissinger never ceases to remind us that the key to American dominance in the world is the disunity of Eurasia. Washington’s biggest defeat was the creation of a political and economic alliance between Beijing and Moscow. The accession of Berlin will completely negate the last victory of American diplomacy and will create a condition of rapid decline of the political weight of the United States.

But these powers soon will be able to occupy the White House, and it will be time to talk about the future, the future in which Russia and the United States have to live in.

Immediately upon returning to the States, Henry Kissinger wrote a column for the magazine The National Interest, in which he outlined his vision for the future of the world. The most significant points being:

Firstly, the relationship between the U.S. and Russia is currently probably even worse than they were before the end of the cold war. Experts in both countries believe that Moscow and Washington have entered a new phase of confrontation and are unlikely to be able to cooperate effectively on issues of world order. Secondly, he pointed out that Russia and the U.S. should cooperate. According to him, the country needs to develop a concept of partnership, which will set out the roles each country will play in shaping the new world order and the concept of a coordinated approach to it.

Kissinger noted that the U.S. and Russia should cooperate not only among themselves but also with other states. Instability in the world today is unprecedented. Threats arise because of the destruction of state power and the growing number of uncontrolled territories. Such problems cannot be solved by one country, so the United States must continually cooperate with Russia and other world powers.

Henry Kissinger did not ignore Ukraine, which, in his opinion should become a bridge between Russia and the West, and not an outpost of one of the parties. Also the diplomat stressed that if the U.S. and Russia were to work together in Syria, along with other major powers, they will be able to create a model for a peaceful settlement of the conflict, not only in the Middle East, but possibly in other areas.

Over the past few years, Washington and Moscow cooperated only sporadically, but great progress was made, which is not surprising: discussions were held outside the agreed strategic format. Therefore, Kissinger stated the need to perceive Russia as an integral element of any new global equilibrium, not only as a threat to the United States.

Let us try to understand the diplomatic lexicon of politics and look at the problem from a great height. How does the U.S (Henry Kissinger) approach problem-solving at the highest, that is, strategic level?

This catches the eye. No one in the States (even Kissinger) doubts that the future of the world, at any point, must be addressed with Russia and possibly with even some major countries.

Has the rhetoric changed in the last four years? It has long forgotten the concept of a singular global hegemon, which for last 20 years was the USA. Also forgotten are world governments (American), and the strongest army with the most modern weapons.

It should be understood that Russia’s “right to decide” was not due to the fact that the United States was flexible, but because the events of recent years and the efforts of the leadership of the Russian Federation has forced Washington to reconsider their opinions and make concessions.

An important marker is the desire of the former “masters of the world” to share the burden of responsibility for Ukraine with Moscow, and return it to its dominant period, when this area was once the bridge between Europe and Russia. In fact, the U.S. is ready to retreat and lose half of its influence, until they lose everything.

It’s the same thing in Syria. Six months ago it seemed that the days of the Assad regime were numbered, and the entire Middle East would remain not only as eternal pain for Europe and Russia, but also in full orbit of the political power of the United States. Six months later and there has been enormous change. An outpost of the U.S – Saudi Arabia – is on the verge of defeat. Turkey found itself in the situation of Ukraine two years ago, and may simply fall apart. At the same time, Russia and Iran are increasing their presence and influence by leaps and bounds in the Middle East, threatening in the medium term to squeeze the U.S. out of the strategic region.

But because of the mouth of Henry Kissinger, Vladimir Putin has apparently also heard the suggestion to “divide” the region. And this (according to the American political elite) must become a “model” for similar agreements in other parts of Eurasia.

The bridge through Alaska

What did the President of Russia say? I think he said he would think about it for another four years. Through which he will be able to offer Henry Kissinger, or someone else, to make Alaska a “bridge” between Russia and America, and will promise to consider also the interests of Washington and other major powers in Europe.

But if they are not satisfied with the American political elite, they will have to wait for the next offer, which is expected in four years. But it seems to me that it will be even worse for them.