Attempts to plug the well have made the site more unstable; blowout risk is an issue.

On Saturday, regulators in California decided to hold off on a plan to capture and burn the natural gas that is leaking from a broken storage well just north of Los Angeles, citing the risk of a “catastrophic explosion,” according to the Los Angeles Times. 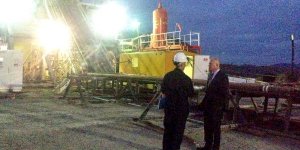 No state funds will be used to fix it, but some gas storage sites must now be monitored.

The well at the Aliso Canyon storage facility has beenleaking since October 23, belching massive amounts of methane, an extremely potent greenhouse gas, into the air. Methane is not only bad for climate change, it’s also extremely flammable.

At first, California regulators wanted to take advantage of that property of methane by capturing and burning off the gas coming from the well. That would have reduced the methane’s impact on the environment somewhat while Southern California Gas, the company that owns the Aliso Canyon facility, finished drilling the relief well to plug the underground reservoir feeding the leak. As National Geographic noted in an article last week, “Flaring gas has a much lower impact on the climate than a vent directly into the atmosphere—the flame converts gas into an amount of carbon dioxide that will have 30 times less warming potential in the near term.”

In addition, burning the gas captured from the leak would have reduced the impact on nearby residents of Porter Ranch, many of whom have been relocated due to the effects of the chemicals that natural gas is treated with, which can cause nausea, headaches, and bloody noses.

But at Saturday’s meeting, the South Coast Air Quality Management District decided to stall the plan to capture and burn gas from the leaking well until local fire officials as well as state and federal authorities have given their approval, the Los Angeles Times wrote.

That decision came after the California Public Utilities Commission (PUC) criticized the plan, which involved capturing gas at the leak site with a 3-foot-wide pipe and burning the gas off at a distance from the wellhead. Instead, the PUC said, SoCal Gas’ earlier attempts to plug the leak by pumping slurry into the wellhead weakened it to the point where a misstep in installing the 3-foot-wide pipe could cause a blowout to occur, which could cause the pressurized gas to vent directly into the atmosphere instead of diffusing through several areas in the ground, as it is doing now.

As the Los Angeles Times reported last week, SoCal Gas’ earlier attempts at plugging the leak by pumping slurry into the wellhead created a 25-foot-deep ditch around the site. “The wellhead sits exposed within the cavernous space, held in place with cables attached after it wobbled during the plugging attempt,” the Times wrote. That precarious wellhead is a last defense against the unfettered venting of a lot of pressurized gas.

On top of that, the area around the wellhead is so flammable that cellphones and watches are not permitted, lest something set off a spark. Relief well drilling takes place at a site that is a safe distance away.

The relief well is not expected to be completed until early February. As of January 15, the Governor’s Office of Emergency Services reported that the relief well had been drilled to a depth of 7,800 feet. The reservoir that contains the natural gas (which itself is an old oil well, sucked dry before the 1970s) lies some 8,500 to 8,700 feet beneath the surface.

On Saturday, the Southern Coast Air Quality Management District also proposed ordering SoCal Gas to permanently shut down the Aliso Canyon facility, which is the largest west of the Mississippi and includes 115 wells. SoCal Gas lawyer Robert Wyman said on Saturday that the company would oppose such an order because “the reservoir is the largest of the company’s four area storage facilities and said the company cannot deliver economical and reliable gas to customers without it,” according to the Times.