Ammon Bundy and 7 Others Held in Oregon; LaVoy Finicum Is Reported Dead JOHN DAY, Ore. — Ammon Bundy, the leader of an armed seizure of a federal wildlife refuge in rural eastern Oregon, was arrested and one person was killed Tuesday afternoon in a traffic stop in rural Oregon, the F.B.I. and the Oregon State Police said.

Seven other people, including Mr. Bundy’s brother Ryan Bundy, were arrested, the authorities said. Another person was hospitalized with injuries that were not life-threatening.

The authorities did not identify the man who was killed, but a member of the Nevada State Assembly, Michele Fiore, who has been a supporter of the Bundy family, said on Twitter that it was LaVoy Finicum. Mr. Finicum had become a de facto spokesman for the occupiers.

The confrontation came after more than three weeks of growing tension and anxiety that put the tiny community of Burns — about a five-hour drive from Portland — into an international debate about homegrown right-wing militias, public lands and constitutional rights. Mr. Bundy, 40, and a group of his followers, adopting the name Citizens for Constitutional Freedom, occupied the Malheur National Wildlife Refuge, about 30 miles southeast of Burns, in Harney County, on Jan. 2. 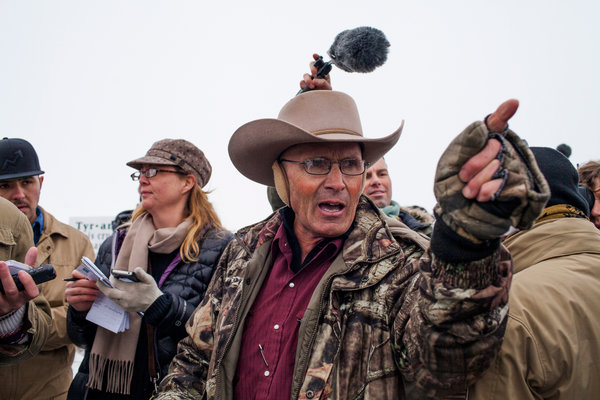 LaVoy Finicum was said to be killed during the traffic stop. Credit Jarod Opperman for The New York Times

The Bundy brothers and supporters were arrested along Highway 395 outside Burns around 4:25 p.m., officials said.

Ammon Bundy and some of his group had been expected at a community meeting Tuesday night about 70 miles away in John Day, Ore., where he was to be the guest speaker. They never arrived.

The Bundys and the other occupiers contend that the federal government had illegally taken land in Oregon and elsewhere around the West from ranchers and other private landholders over the decades, and they demanded that it be returned to local control. They also said they were supporting two local ranchers imprisoned for setting fires that spread to federal land.

Oregon’s governor, Kate Brown, who has called on the federal government to enforce the law, asked Oregonians on Tuesday night to be patient as the investigation unfolded. The refuge is operated by the United States Fish and Wildlife Service.

But until Tuesday afternoon, when the occupation leaders were away from the refuge site, apparently en route to the John Day meeting — a strange, tortured atmosphere defined the standoff. For weeks, there was deep uncertainty as to how, when or, some said, even if law enforcement agents would take action.

The F.B.I. and the Oregon State Police said that Mr. Bundy, his brother and three other people, including Shawna Cox, 59, of Kanab, Utah, and Ryan Waylen Payne, 32, of Anaconda, Mont., were arrested on a state highway, but they provided no further details. Ms. Cox and Mr. Payne were prominent in speaking for the refuge. Also arrested on the highway was Brian Cavalier, 44, of Bunkerville, Nev.

The authorities said only that shots were fired during the course of the arrest. Two other people: Peter Santilli, 50, of Cincinnati, and Joseph Donald O’Shaughnessy, 45, of Cottonwood, Ariz., were arrested later in Burns, and John Eric Ritzheimer, 32, turned himself in to the police in Peoria, Ariz., the authorities said. All of the defendants face a federal felony charge of conspiracy to impede officers of the United States from discharging their official duties through the use of force, intimidation or threats.

At the refuge, a spokesman said they would wait out the night. Jason Patrick, an occupier, said that several people were still inside and that the mood was “prepared but calm.”

“They said ‘peaceful resolution,’ but now there is a dead cowboy,” he said, adding that he believes the F.B.I. was “hellbent on war.”

Mr. Patrick would not say whether the occupiers would stay at the refuge in the long term.

“The plan is peaceful resolution through the night. Ammon says the sunlight is the best disinfectant,” he said. “We’ll let the sun shine and see what’s up.”

Mr. Bundy’s family became a symbol of antigovernment sentiment in 2014 when his father, Cliven Bundy, inspired a standoff between armed local activists and federal officials seeking to confiscate cattle grazing illegally on federal land in Nevada.

At the refuge, a 188,000-acre expanse of high desert sage that is known as one of the great migratory bird viewing areas of North America, vehement determination and low-key, soft-spoken declarations of belief mixed like oil and water on any given day. Supporters of the occupation — Mr. Santilli, in particular — were openly belligerent to counterprotesters and other opponents of the occupation. On one recent day, when an environmental group came bearing signs denouncing the occupation, Mr. Santilli screamed in their faces.

Mr. Santilli was recording a live stream on Tuesday when he was taken into custody as he tried to re-enter the refuge. Supporters who were in a vehicle with him said in the video that they had been trying to evacuate some women and children.

Ms. Cox, in an interview inside a building at the refuge a few days before her arrest, also vowed to stay until the federal government handed it over to local control. “When the people come and take their rightful position, then we can go home,” she said. “They are coming; it’s just taking a little while.”

Harney County, which has only about 7,100 people spread out over an area roughly the size of Massachusetts, has a small hospital in Burns, the biggest community. Law enforcement officials did not say where the injured person was treated. But St. Charles hospital in Bend, about 150 miles west of the refuge, was on lockdown Tuesday night, with no one other than patients and employees able to enter. There were 10 police cars and one fire truck in front. Two police officers with assault weapons were in the foyer. Officials would not confirm if any victims have been airlifted there.

Correction: January 27, 2016
An earlier version of this article misstated the location of St. Charles hospital. It is 150 miles west of the Malheur National Wildlife Refuge, not 130 miles east.
This entry was posted in Uncategorized. Bookmark the permalink.