“The TPA, TPP and TTIP were all negotiated in complete secrecy;
otherwise, the citizens of each participating nation would have
rejected them outright.”
— An American Political Analyst

SOTN Editor’s Note:
Now it’s becoming clear why the TPP (Trans-Pacific Partnership) process was conducted with such secrecy.  The following quote from the article below sums it all up … and it’s not good at all.

The treaty would give signatories the ability to curtail legal proceedings if the theft of information is “detrimental to a party’s economic interests, international relations, or national defense or national security” – in other words, presumably, if a trial would cause the information to spread.

For those uninitiated in the complex and arcane language of free trade agreements, the most serious consequences associated with this particular part of the agreement are both profound and far-reaching.  Essentially, the TPP will allow nations and corporations alike to get away with bloody murder in the conduct of their business both domestic and international.

Remember, the U.S. Federal Government has invoked the “National Security” clause more frequently than any other, often in the process of engaging in the most nefarious activity.  The real history books are replete with instances of state-sponsored terrorism, naked wars of aggression, and black sites used for overseas torture operations, to name but a few instances when “national security” has been used as justification.

The TPP was obviously written by those participating parties and nations which are the most guilty of such illicit and repugnant behavior.  Undoubtedly, this fatally flawed trade agreement was passed in utter secret in the interest of permitting those same nations to continue carrying out some of the most odious crimes ever committed against humanity.

by Sam Thielman
The Guardian President Obama meets with agriculture and business leaders to discuss the benefits of the Trans-Pacific Partnership for American business and workers. Photograph: Martin H Simon/EPA

Wikileaks has released what it claims is the full intellectual property chapter of the Trans-Pacific Partnership (TPP), the controversial agreement between 12 countries that was signed off on Monday.

TPP was negotiated in secret and details have yet to be published. But critics including Democrat presidential hopefuls Hillary Clinton and Bernie Sanders, unions and privacy activists have lined up to attack what they have seen of it. Wikileaks’ latest disclosures are unlikely to reassure them. 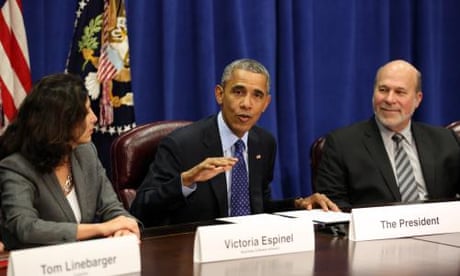 One chapter appears to give the signatory countries (referred to as “parties”) greater power to stop embarrassing information going public. The treaty would give signatories the ability to curtail legal proceedings if the theft of information is “detrimental to a party’s economic interests, international relations, or national defense or national security” – in other words, presumably, if a trial would cause the information to spread.

A drafter’s note says that every participating country’s individual laws about whistleblowing would still apply.

“The text of the TPP’s intellectual property chapter confirms advocates warnings that this deal poses a grave threat to global freedom of expression and basic access to things like medicine and information,” said Evan Greer, campaign director of internet activist group Fight for the Future. “But the sad part is that no one should be surprised by this. It should have been obvious to anyone observing the process, where appointed government bureaucrats and monopolistic companies were given more access to the text than elected officials and journalists, that this would be the result.”

Among the provisions in the chapter (which may or may not be the most recent version) are rules that say that each country in the agreement has the authority to compel anyone accused of violating intellectual property law to provide “relevant information […] that the infringer or alleged infringer possesses or controls” as provided for in that country’s own laws.

The rules also state that every country has the authority to immediately give the name and address of anyone importing detained goods to whoever owns the intellectual property.

That information can be very broad, too: “Such information may include information regarding any person involved in any aspect of the infringement or alleged infringement,” the document continues, “and regarding the means of production or the channels of distribution of the infringing or allegedly infringing goods or services, including the identification of third persons alleged to be involved in the production and distribution of such goods or services and of their channels of distribution.”

TPP is now facing a rough ride through Congress where President Obama’s opponents on the right argue the agreement does not do enough for business while opponents on the left argue it does too much.

Obama has pledged to make the TPP public but only after the legislation has passed.

Michael Wessel was one of the advisers who was asked by the US government to review what he said were woefully inadequate portions of the document. Wessel said the thrust of the TPP does nothing for Americans. “This is about increasing the ability of global corporations to source wherever they can at the lowest cost,” he said.

“It is not about enhancing or promoting production in the United States,” Wessel said. “We aren’t enforcing today’s trade agreements adequately. Look at China and Korea. Now we’re not only expanding trade to a far larger set of countries under a new set of rules that have yet to be tested but we’re preparing to expand that to many more countries. It would be easier to accept if we were enforcing today’s rules.”

Wessel said that ultimately, the countries currently benefiting from increased outsourcing of jobs by American firms aren’t likely to see wages rise above a certain level. “If you look in other countries, Mexico and India and others – there’s been a rise in the middle class but there’s been stagnation for those we’re hoping to get into the middle class,” Wessel said. “Companies are scouring the globe for countries they can get to produce most cheaply.”

That, he said, results in constant downward pressure on American wages. “Companies are not invested here the way we’d like them to; they’re doing stock buybacks and higher dividends,” Wessel continued. “They may yield support for the stock-holding class but it’s not creating jobs.”