A Grassroots Movement Forms To Boycott The 2016 U.S. Presidential Election 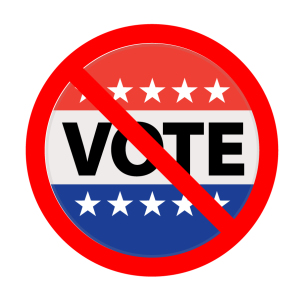 Voting is one of the most sacred rights in any democratic system. It’s the most important tool we the people have to make our voices heard, it’s how we exert influence over those who would serve as our representatives in government. And any Government that would deny the people the right to vote is by definition tyrannical, and its citizens little more than enslaved subjects.

So if voting is so critical to the maintenance of a democracy… how can we be calling for a boycott of the 2016 Elections?

The answer lies in the corrupted state of our current democratic process. In the 2012 Elections the total amount spent for both the Democrats and Republicans was over 1 billion dollars each, and it’s projected that the 2016 presidential election could cost as much as $5 billion. This means that the first requirement of any candidate for national office is that they are approved by the money powers: the billionaires, bankers and industrialists and militarists who now – thanks to the Supreme Courts Citizens United decision – are able to throw unlimited amounts of free-speech money at our politicians.

What this means is that our elected officials are essentially pre-selected for us by the country’s money elite. They decide who will receive the outrageous sums of money now required to run a national campaign. Their money dictates who will get the best people to run the campaigns and hire the best marketing companies; it determines who will get the most advantageous media coverage – and who will  be skewered by the press. No candidate can survive this costly, grueling primary process unless he or she has been hand selected by the powers that be.

What this has meant for this country is that for the past 30 years we have never had the chance vote for a candidate who was not firmly in the pocket of the rich and powerful. This has been amply evidenced in the pro-banking, pro-corporate, pro-war policies that have been the overarching themes of the last 4 administrations, both Democrat and Republican. This bias has completely outweighed any supposed ideological differences between parties; their liberal and conservative rhetoric is just a show, meant to excite and arouse the masses while in office they unerringly pursue the agenda of their masters.

Globalization, free trade, privatization, deregulation… all of these initiatives have been presented as good for the people – when in fact they have only served to enrich and empower the already rich and the already powerful.

Yet in every single election season we are played for fools, subjected to the political charade where politicians bite their lips and speak tearfully of their concerns for the people… hell, Hillary Clinton kicked off her campaign with a cross country trip in an SUV, stopping at truck stops and fast food restaurants to show us how much she relates to us regular folk. Remember, this is a woman who typically flies in Gulfstreams, earns $200 thousands per speech, and who’s husband signed into law not only the job-killing NAFTA agreement, but also the bill which struck down Glass Steagel and de-regulated the banking industry. Are we really meant to believe she has been born again as a woman of the people? And if we don’t… tough shit. Oh, you can vote for Jeb Bush if you’d like – and revisit the horrors of his brother George’s administration. But if you want change, real change – not the Obama bullshit kind of change – well you’re not going to have much of a choice.

See that’s their game. They put up two candidates who are part of the establishment machine, and then they really don’t care which asshole we vote into office. It doesn’t matter how we vote… they win. Your vote doesn’t really count and your voice goes unheard. So by rigging the system, by predetermining who we get to vote for, they have essentially taken away our right to vote, and we are not much different than some banana republic with only one candidate on the ballot.

So you see, we cannot vote ourselves out of this mess.

That’s why we are advocating a National Bipartisan Boycott of the Presidential Election. Our goal is to reduce the national turnout to less than 10% of the eligible voters. We want to send a message loud and clear that we see their game and we refuse to play. We refuse to rubber stamp a corrupt and co-opted electoral system, and by boycotting their fraudulent election we will expose it as illegitimate and not representative of the will of the American people. Let the next president to take office with an unmistakeable vote of no-confidence. Let the powers-that-be know – along with everyone else in the world – that the American people are have awoken, that we recognize the cancer which has taken control of our country, and we will not passively accept their lies, their crimes and their corruption any more.