Meet The Kagans: Seeking War To The End Of The World

by Robert Parry
The Ron Paul Institute for Peace & Prosperity 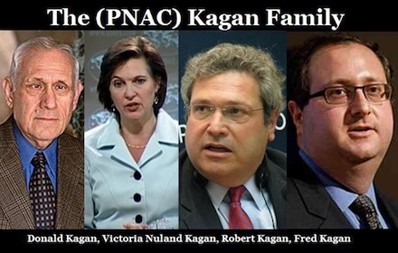 If the neoconservatives have their way again, US ground troops will reoccupy Iraq, the US military will take out Syria’s secular government (likely helping Al Qaeda and the Islamic State take over), and the US Congress will not only kill the Iran nuclear deal but follow that with a massive increase in military spending.

Like spraying lighter fluid on a roaring barbecue, the neocons also want a military escalation in Ukraine to burn the ethnic Russians out of the east, and the neocons dream of spreading the blaze to Moscow with the goal of forcing Russian President Vladimir Putin from the Kremlin. In other words, more and more fires of Imperial “regime change” abroad even as the last embers of the American Republic die at home.

Much of this “strategy” is personified by a single Washington power couple: arch-neocon Robert Kagan, a co-founder of the Project for the New American Century and an early advocate of the Iraq War, and his wife, Assistant Secretary of State for European Affairs Victoria Nuland, who engineered last year’s coup in Ukraine that started a nasty civil war and created a confrontation between nuclear-armed United States and Russia.

Kagan, who cut his teeth as a propaganda specialist in support of the Reagan administration’s brutal Central American policies in the 1980s, is now a senior fellow at the Brookings Institution and a contributing columnist to The Washington Post’s neocon-dominated opinion pages.

On Friday, Kagan’s column baited the Republican Party to do more than just object to President Barack Obama’s Iranian nuclear deal. Kagan called for an all-out commitment to neoconservative goals, including military escalations in the Middle East, belligerence toward Russia and casting aside fiscal discipline in favor of funneling tens of billions of new dollars to the Pentagon.

Kagan also showed how the neocons’ world view remains the conventional wisdom of Official Washington despite their disastrous Iraq War. The neocon narrative gets repeated over and over in the mainstream media no matter how delusional it is.

For instance, a sane person might trace the origins of the bloodthirsty Islamic State back to President George W. Bush’s neocon-inspired Iraq War when this hyper-violent Sunni movement began as “Al Qaeda in Iraq” blowing up Shiite mosques and instigating sectarian bloodshed. It later expanded into Syria where Sunni militants were seeking the ouster of a secular regime led by Alawites, a Shiite offshoot. Though changing its name to the Islamic State, the movement continued with its trademark brutality.

But Kagan doesn’t acknowledge that he and his fellow neocons bear any responsibility for this head-chopping phenomenon. In his neocon narrative, the Islamic State gets blamed on Iran and Syria, even though those governments are leading much of the resistance to the Islamic State and its former colleagues in Al Qaeda, which in Syria backs a separate terrorist organization, the Nusra Front.

But here is how Kagan explains the situation to the Smart People of Official Washington:

Critics of the recent nuclear deal struck between Iran and the United States are entirely right to point out the serious challenge that will now be posed by the Islamic republic. It is an aspiring hegemon in an important region of the world.

It is deeply engaged in a region-wide war that encompasses Syria, Iraq, Lebanon, the Gulf States and the Palestinian territories. It subsidizes the murderous but collapsing regime of Bashar al-Assad in Syria, and therefore bears primary responsibility for the growing strength of the Islamic State and other radical jihadist forces in that country and in neighboring Iraq, where it is simultaneously expanding its influence and inflaming sectarian violence.

While ranting about “Iranian hegemony,” Kagan called for direct military intervention by the world’s true hegemonic power, the United States. He wants the US military to weigh in against Iran on the side of two far more militarily advanced regional powers, Israel and Saudi Arabia, whose combined weapons spending dwarfs Iran’s and includes – with Israel – a sophisticated nuclear arsenal.

Yet reality has never had much relationship to neocon ideology. Kagan continued:

Any serious strategy aimed at resisting Iranian hegemony has also required confronting Iran on the several fronts of the Middle East battlefield. In Syria, it has required a determined policy to remove Assad by force, using US air power to provide cover for civilians and create a safe zone for Syrians willing to fight.

In Iraq, it has required using American forces to push back and destroy the forces of the Islamic State so that we would not have to rely, de facto, on Iranian power to do the job. Overall, it has required a greater US military commitment to the region, a reversal of both the perceived and the real withdrawal of American power.

And therefore it has required a reversal of the downward trend in US defense spending, especially the undoing of the sequestration of defense funds, which has made it harder for the military even to think about addressing these challenges, should it be called upon to do so. So the question for Republicans who are rightly warning of the danger posed by Iran is: What have they done to make it possible for the United States to begin to have any strategy for responding?

In Kagan’s call for war and more war, we’re seeing, again, the consequence of failing to hold neocons accountable after they pushed the country into the illegal and catastrophic Iraq War by selling lies about weapons of mass destruction and telling tales about how easy it would be.

Instead of facing a purge that should have followed the Iraq calamity, the neocons consolidated their power, holding onto key jobs in US foreign policy, ensconcing themselves in influential think tanks, and remaining the go-to experts for mainstream media coverage. Being wrong about Iraq has almost become a badge of honor in the upside-down world of Official Washington.

But we need to unpack the truckload of sophistry that Kagan is peddling. First, it is simply crazy to talk about “Iranian hegemony.” That was part of Israeli Prime Minister Benjamin Netanyahu’s rhetoric before the US Congress on March 3 about Iran “gobbling up” nations – and it has now become a neocon-driven litany, but it is no more real just because it gets repeated endlessly.

For instance, take the Iraq case. It has a Shiite-led government not because Iran invaded Iraq, but because the United States did. After the US military ousted Sunni dictator Saddam Hussein, the United States stood up a new government dominated by Shiites who, in turn, sought friendly relations with their co-religionists in Iran, which is entirely understandable and represents no aggression by Iran. Then, after the Islamic State’s dramatic military gains across Iraq last summer, the Iraqi government turned to Iran for military assistance, also no surprise.

However, leaving aside Kagan’s delusional hyperbole about Iran, look at what he’s proposing. He wants to return a sizable US occupation force to Iraq, apparently caring little about the US soldiers who were rotated multiple times into the war zone where almost 4,500 died (along with hundreds of thousands of Iraqis). Having promoted Iraq War I and having paid no price, Kagan now wants to give us Iraq War II.

But that’s not enough. Kagan wants the US military to intervene to make sure the secular government of Syria is overthrown, even though the almost certain winners would be Sunni extremists from the Islamic State or Al Qaeda’s Nusra Front. Such a victory could lead to genocides against Syria’s Christians, Alawites, Shiites and other minorities. At that point, there would be tremendous pressure for a full-scale US invasion and occupation of Syria, too.

That may be why Kagan wants to throw tens of billions of dollar more into the military-industrial complex, although the true price tag for Kagan’s new wars would likely run into the trillions of dollars. Yet, Kagan still isn’t satisfied. He wants even more military spending to confront “growing Chinese power, an aggressive Russia and an increasingly hegemonic Iran.”

In his conclusion, Kagan mocks the Republicans for not backing up their tough talk: “So, yes, by all means, rail about the [Iran] deal. We all look forward to the hours of floor speeches and campaign speeches that lie ahead. But it will be hard to take Republican criticisms seriously unless they start doing the things that are in their power to do to begin to address the challenge.”

While it’s true that Kagan is now “just” a neocon ideologue – albeit one with important platforms to present his views – his wife Assistant Secretary of State Nuland shares his foreign policy views and even edits many of his articles. As she told The New York Times last year, “nothing goes out of the house that I don’t think is worthy of his talents. Let’s put it that way.” [See “Obama’s True Foreign Policy ‘Weakness.’”]

But Nuland is a foreign policy force of her own, considered by some in Washington to be the up-and-coming “star” at the State Department. By organizing the “regime change” in Ukraine – with the violent overthrow of democratically elected President Viktor Yanukovych in February 2014 – Nuland also earned her spurs as an accomplished neocon.

Nuland has even outdone her husband, who may get “credit” for the Iraq War and the resulting chaos, but Nuland did him one better, instigating Cold War II and reviving hostilities between nuclear-armed Russia and the United States. After all, that’s where the really big money will go – toward modernizing nuclear arsenals and ordering top-of-the-line strategic weaponry.

There’s also a family-business aspect to these wars and confrontations, since the Kagans collectively serve not just to start conflicts but to profit from grateful military contractors who kick back a share of the money to the think tanks that employ the Kagans.

For instance, Robert’s brother Frederick works at the American Enterprise Institute, which has long benefited from the largesse of the Military-Industrial Complex, and his wife Kimberly runs her own think tank called the Institute for the Study of War (ISW).

According to ISW’s annual reports, its original supporters were mostly right-wing foundations, such as the Smith-Richardson Foundation and the Lynde and Harry Bradley Foundation, but it was later backed by a host of national security contractors, including major ones like General Dynamics, Northrop Grumman and CACI, as well as lesser-known firms such as DynCorp International, which provided training for Afghan police, and Palantir, a technology company founded with the backing of the CIA’s venture-capital arm, In-Q-Tel. Palantir supplied software to US military intelligence in Afghanistan.

Since its founding in 2007, ISW has focused mostly on wars in the Middle East, especially Iraq and Afghanistan, including closely cooperating with Gen. David Petraeus when he commanded US forces in those countries. However, more recently, ISW has begun reporting extensively on the civil war in Ukraine. [See “Neocons Guided Petraeus on Afghan War.”]

So, to understand the enduring influence of the neocons – and the Kagan clan, in particular – you have to appreciate the money connections between the business of war and the business of selling war. When the military contractors do well, the think tanks that advocate for heightened global tensions do well, too.

And, it doesn’t hurt to have friends and family inside the government making sure that policymakers do their part to give war a chance — and to give peace the old heave-ho.