Pamela Geller’s American Freedom Defense Initiative: Who do they really work for? 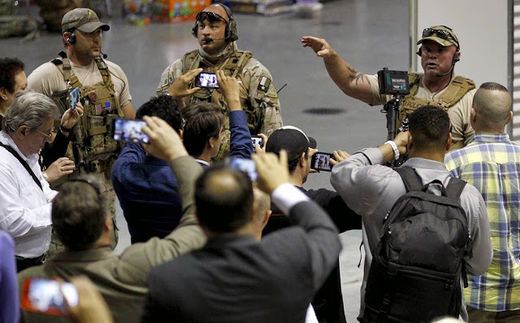 ABC News confirms that one of the suspects of the Garland Texas shooting incident, featuring professional war propagandists of the so-called “American Freedom Defense Initiative” (AFDI), has been under FBI surveillance and investigation since at least as early as 2007.

Followers of ISIS had been sending messages about the event in Texas for more than a week, calling for attacks. One referenced January’s Charlie Hebdo massacre in France and said it was time for “brothers” in the United States to do their part.

Simpson was well known to the FBI. Five years ago he was convicted for lying to federal agents about his plans to travel to Africa where investigators alleged he planned to join a terror group.

The investigation into Simpson reached back to July 2007, when he was recorded saying of fighting with Islamists, “I know we can do it, man. But you got to find the right people that… Gotta have connects.”

Despite the event allegedly increasing chatter amongst “Islamic State” (ISIS) groups online, and despite the suspect Elton Simpson being long under FBI surveillance and even sentence to 3 years of probation resulting from a terror-related investigation, he was still able to conveniently conspire and carry out an attack on a highly provocative propaganda stunt in the state of Texas.

As with all other staged provocations, including similar shootings in Paris, France, Copenhagen, Denmark, and Sydney, Australia, the suspects were well known to state security agencies for years, but allowed to conspire and carry out predictable, deadly, and politically highly convenient attacks. All of this echos the similar and long-since exposed staged provocations of the notorious “Operation Gladio,” carried out by NATO.

In Paris, France, the suspects in the so-called “Charlie Hebo Shooting” were under the watch of security forces for years, were in and out of jail specifically for terrorism, were known to have left France to join terrorists fighting with Western-backing in Syria and return, only to be left “unwatched” for precisely the 6 months they would need to plan, assemble the weapons for, and prepare to execute the attack.

In Copenhagen, an assailant who attacked a synagogue killing 2, was also well known to security agencies. The Washington Post would report in their article, “Danish attacks echo France,” that:

The assailant in this weekend’s attacks was well known to Danish intelligence, Madsen said. In November 2013, Hussein stabbed a teenager in the thigh while aboard a commuter train, and according to Danish media, he had recently been released from prison following his conviction.

But it was unclear whether this weekend’s assailant was under surveillance and, if so, how he managed to slip free long enough to plan an attack with an assault rifle.

Once again, suspects under surveillance and even arrested and imprisoned as violent offenders or as terrorists, managed to conveniently “slip free” of security agencies just in time to carry out attacks that just so happen to help the West continue its extraterritorial wars raging abroad, and continue building an abhorrent police state back at home.

Finally, in Australia, a suspect who held up a cafe in a deadly hostage crisis, was literally brought to Australia from Iran for the purpose of waging a propaganda war on Iran. When this failed to materialize, the “shape-shifting sheik” would morph to fit the villain necessary to match whatever narrative was currently being floated around the Western media. His final performance would help bolster the illusion that ISIS is an enemy of the West, rather than a creation and perpetuation of it, and to this day serving as the West’s extraterritorial mercenary forces in nations like Syria and Iraq.

NATO’s Operation Gladio, and its larger “stay behind” networks established after World War II across Europe and at the center of multiple grisly assassinations, mass shootings, and terrorist bombings designed to demonize the Soviet Union as well as criminalize and crush support for left-leaning political parties growing in popularity in Western Europe. It would be determined that NATO’s own covert militant groups were killing innocent Western Europeans in order to effect a “strategy of tension” used to instill fear, obedience, and control over Western populations.

A similar campaign of staged terror has been and is still being carried out not only across Europe but also now in the Americas – including in Canada. The purpose of this campaign is to divide society socially and politically, while helping to radicalize young people to join the ranks of US-British-Saudi armed and funded mercenary groups abroad in nations like Syria, Iraq, Yemen, Egypt, and Libya, and then return to commit staged provocations to inspire fear, hatred, and obedience at home.

It is a conflict of which both sides are controlled by the same criminal special interests. While it is clear that Western security forces maintain a large pool of potential terrorists they intentionally allow to roam free until needed, it may not be clear to many of what the backgrounds are of those who organized the event in Garland, Texas that allegedly provoked this most recent attack.

Neo-Con Propagandists Are Hiding Behind Freedom of Speech, Not Defending It

The supposed trigger for this provocation was a “draw Mohammad” contest organized by the American Freedom Defense Intitiative (AFDI), a performing Neo-Conservative propaganda troupe consisting of the Bush-era US Ambassador to the UN John Bolton, full-time propagandist Pamela Gellar and Robert Spencer, and Dutch politician Geert Wilders.

Their debut performance was in 2010, where they came out to protest the so-called “Ground Zero Mosque” supposedly to be built near the ruins of the destroyed World Trade Center in New York City. The mosque was never actually built, not because of the public backlash, but because the entire controversy was manufactured.The “imam” allegedly behind the mosque, was in fact a member of the Council of Foreign Relations, funded and backed by the very same corporate-funded think tanks that set out to protest against the planned “mosque.” In other words, the entire scandal was manufactured on both sides by the same special interests for the purpose of manipulating the public.

Since then, with little success, AFDI and its various affiliates in North America and Europe have attempted to stoke hatred not toward “radical Islam,” terrorists, or the US-backed regimes arming and funding them, but against all Muslims. Dutch politician Geert Wilders, for his part, while claiming to be defending “free speech” in Texas, has been busy trying to infringe on the rights of Muslims back in his home country.

He has even gone as far as calling for the complete censorship of the Qu’ran. The Telegraph in their article, “Ban Koran like Mein Kampf, says Dutch MP,” would report:

The Koran should be banned as a “fascist book” alongside Mein Kampf because it urges Muslims to kill non-believers, says Dutch populist MP Geert Wilders.

Wilders and the rest of AFDI are not exercising free speech, but are in fact attempting to inspire fear, suspicion, hatred, and tangible violence against not just “terrorists,” but all 1 billion plus practitioners of the Islamic faith, many of whom are fighting and dying this very moment battling real terrorists, ironically armed, funded, and fully backed by the very Neo-Cons that have assembled AFDI.

Not only does AFDI hold freedom of speech in contempt and actively set out to destroy it for others, they are now hiding behind it to further strip the rights, peace, and stability away from people both in the West and abroad. The so-called “War on Terror” that AFDI’s rhetoric actively supports has served as the impetus to do everything from expanding warrantless surveillance and an ever expanding police state at home, to help garner support for wars of geopolitical conquest abroad.

Not About “Free Speech”

With these facts in mind, it is clear that “free speech” is a canard used by both the “left” and “right” to distract from the real purpose of the Garland shooting, and other acts of provocation like it. It distracts from the fact that all of the perpetrators have been well-known to security agencies for years, even sentenced and/or imprisoned by various courts, as well as investigated and kept under surveillance. It distracts from the fact that the event at the center of the attacks was organized and carried out by those who themselves have actively sought to curtail the freedoms of others, not to mention foster wars that have ended or otherwise destroyed the lives of millions. It distracts from the fact that the very Neo-Cons telling the world to fear “Islam” represent the same special interests arming and funding literal Al Qaeda and ISIS terrorists across North Africa, the Middle East, and even Central and East Asia.

The AFDI represents one insidious arm of a larger criminal conspiracy that has verifiably helped end the lives of tens of thousands in Syria, Iraq, Libya, Egypt, and Yemen since 2011. It also represents the same special interests that lied to the world to justify invading Iraq in 2003, ending the lives of some 1 million people and leaving the country, to this very day, in constant deadly chaos.

The Garland shooting is not about freedom of speech, but rather about criminal special interests playing both sides of a manufactured strategy of tension to achieve further bloodshed, death, and conquest abroad, while inviting fear, division, and a growing police state stripping us all of our rights here at home.

Neither the AFDI nor the patsies involved in the shooting deserve the public’s sympathy or defense. Rather, they both demand the scrutiny and vigilance required to break the rhetorical back of this conspiracy, and strip away the support it receives from both sides of a mass-manipulated public.