When is somebody going to ask: “Who is starting these arson fires?”

By Shahan Ahmed and Jonathan Lloyd

A brush fire fanned by Santa Ana winds erupted in the hills above the 405 Freeway early Monday, burning homes and forcing evacuations in neighborhoods on Los Angeles’ Westside.

Firefighting helicopters and air tankers were unleashing steady rounds of water and retardant drops on the fire, which is fueled by dry brush in an area that hasn’t seen rain since May. The Getty Fire quickly expanded to 500 acres and cast an eerie orange glow over the 405 Freeway after it started around 1:30 a.m. and spread to the west.

A cause was not immediately determined. No injuries have been reported.

At least five homes have burned. 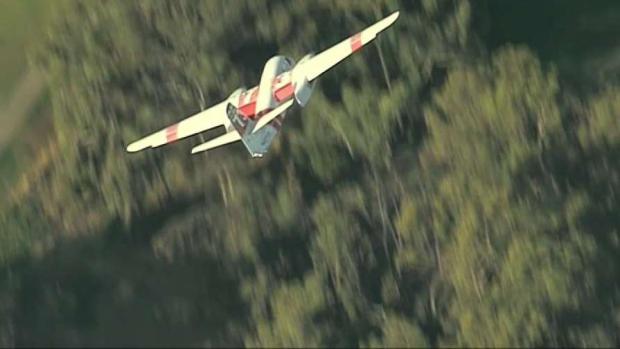 Firefighters worked to increase the containment line around the Getty Fire, which has forced evacuations, road closures and school closures. As seen on Today in LA on Monday, Oct. 28, 2019.  (Published 5 hours ago)

Exit ramps on the busy freeway connecting the west San Fernando Valley with West Los Angeles were shut down through the Sepulveda Pass.

The fire is burning in densely populated hillside areas with narrow roads, threating about 10,000 residential and business structures. Embers were scattered by wind gusts, which were not expected to decrease until later Monday morning.

About 2,600 customers were without power early Monday in Bel Air, Brentwood, Westwood and other West Los Angeles communities. That figure was reduced to about 900 later Monday. 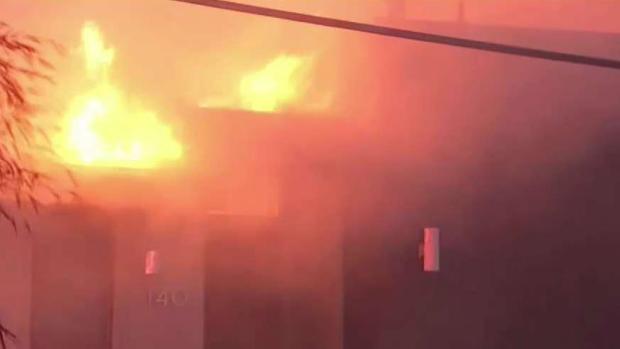 At least one home burned on Tigertail Road in the Getty Fire west of the 405 Freeway. Annette Arreola reports for Today in LA on Monday Oct. 28, 2019.  (Published 6 hours ago)

Residents as far west as Malibu were warned to be prepared for evacuations. Mandatory evacuation zones were extending from the 405 Freeway to the west early Monday. Click here for evacuations, school and road closures and shelter information.

“Be calm, but get out,” Mayor Eric Garcetti said.

In Photos: Brush Fire Burns in the Sepulveda Pass Near Getty Center 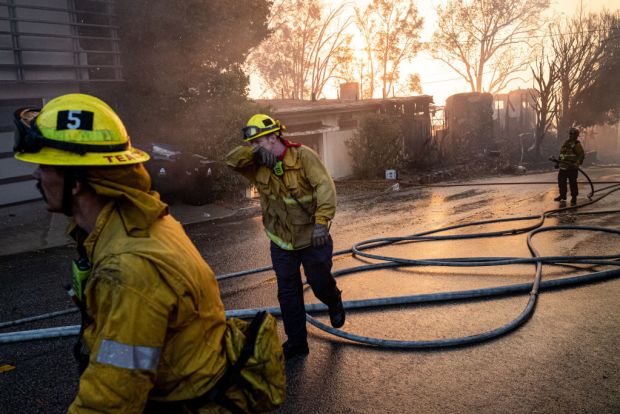 Due to the red flag warning in effect and the dynamic nature of the fire, residents south of Sunset Boulevard were warned to be prepared to evacuate. Winds in the Brentwood area included gusts up to 20 mph with stronger winds to the west.

The Getty Center and Getty Villa, which have special fire protection features, were not threatened.

Los Angeles Lakers star LeBron James tweeted that he and his family had to evacuate their home in the city’s exclusive Brentwood section. There was no immediate word on its fate.

“I pray for all the families in the area that could be affected,” he tweeted. “Pretty please get to safety ASAP.”

Smoke and Fire From Above: Wildfire Images From Space 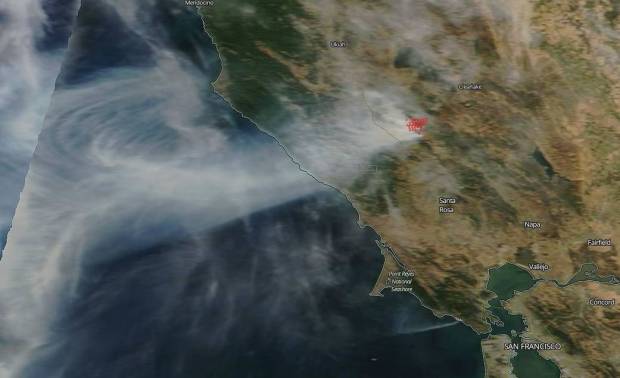 “It you are in an evacuation zone, don’t screw around,” Schwarzenegger tweeted. “I am grateful for the best firefighters in the world, the true action heroes who charge into the danger to protect their fellow Californians.”

The dry hills of the Sepulveda Pass have not had rain since May 26.

“There’s a lot of fuel out there, and it has been bone dry the last few months,” said NBC4 forecaster Anthony Yanez.

A wind shift is expected early Monday afternoon, possibly fanning flames back toward the Gettty Center and 405 Freeway.

The fire comes ahead of what’s expected to be the strongest Santa Ana winds of the season, starting Tuesday around 11 p.m. and lasting through Thursday afternoon. Santa Ana winds are produced by surface high pressure over the Great Basin squeezing air down through canyons and passes in Southern California’s mountain ranges.

In December 2017, an illegal cooking fire at an encampment in a brush area started the Skirball Fire. The fire spread from the encampment near Sepulveda Boulevard and the 405 Freeway and burned hundreds of acres.

Mayor Garcetti said Monday’s fire was not started at a homeless encampment.

One of the worst fires in Los Angeles’ history was fanned by Santa Ana winds when it burned in the Westside area in November 1961. About 480 homes were destroyed in the Bel Air Fire, which caused most of its damage on the east side of the 405 Freeway.

This is a developing story. Please check back for updates.