Why did Trump’s advisors give him an obviously incorrect Dorian tracking map? When President Donald Trump updated the US public on Wednesday about Hurricane Dorian, he used a map that at a glance looked identical to one released by forecasters last week.

But observers spotted a difference.

A “cone” showing the storm’s probable path appeared to have been extended with a felt-tip pen to include part of the state of Alabama, analysts said.

The president has insisted in recent days Alabama was at risk, though forecasters said that was not correct.

What did President Trump say on Wednesday?

In an Oval Office briefing, Mr Trump pointed to a National Oceanic and Atmospheric Administration’s (NOAA) forecast map from 29 August.

The chart had a black loop marked around Alabama that was not on the original version from last week.

Mr Trump told reporters that Dorian “would have affected a lot of other states”.

Later on Wednesday at a White House event, when asked about the map discrepancy, Mr Trump offered no explanation. “I don’t know,” he said.

“I know Alabama was in the original forecast, they thought it would get a piece of it,” Mr Trump said.

NOAA directed queries to the White House press office, which did not immediately respond. 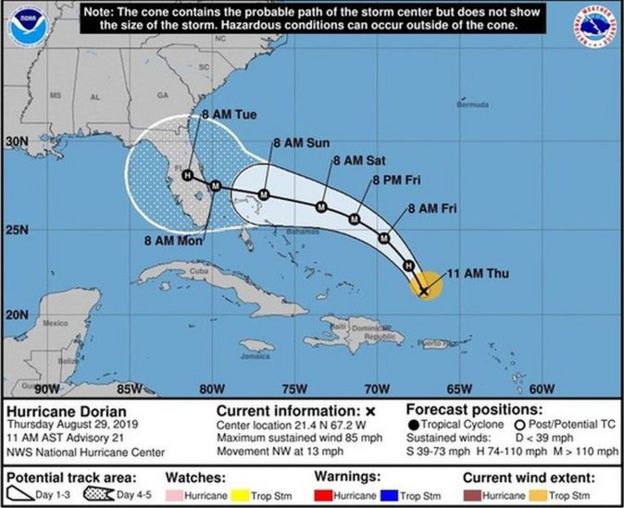 The hurricane hit the Bahamas with winds equalling the highest-ever recorded at landfall, before moving north late on Tuesday. At least 20 people were killed on the archipelago.

What did the president say in recent days about Alabama?

It began on Sunday morning when Mr Trump tweeted: “In addition to Florida – South Carolina, North Carolina, Georgia, and Alabama, will most likely be hit (much) harder than anticipated.”

But Mr Trump soon afterwards on Sunday told reporters at the White House: “Alabama is going to get a piece of it, it looks like.”

About an hour later, he said at a Federal Emergency Management Agency (Fema) briefing that the hurricane “may get a little piece of a great place: It’s called Alabama”.

The same day, NOAA spokesman Christopher Vaccaro made clear in an email to reporters: “The current forecast path of Dorian does not include Alabama.”

He seized on remarks by ABC News’ White House correspondent Jon Karl, who noted the president had “misstated the storm’s possible trajectory”.

Mr Trump tweeted on Monday: “Such a phony hurricane report by lightweight reporter @jonkarl of @ABCWorldNews.

“I suggested yesterday at FEMA that, along with Florida, Georgia, South Carolina and North Carolina, even Alabama could possibly come into play, which WAS true.”

According to AP news agency, forecasts from last Friday indicated that a small strip of Alabama might be affected by Dorian.

However, by Saturday morning meteorologists were no longer predicting the southern state would be in the hurricane’s path.

It was 24 hours later that Mr Trump began asserting that Alabama was at risk from Dorian.

On Wednesday evening, Mr Trump cited the original forecasts to argue that he was right all along.

Some analysts noted that it is illegal to alter official weather maps.

According to Cornell Law School, US law says anyone who “knowingly issues or publishes any counterfeit weather forecast” can face up to 90 days in prison.