Book Review: The Assassination of James Forrestal by David Martin 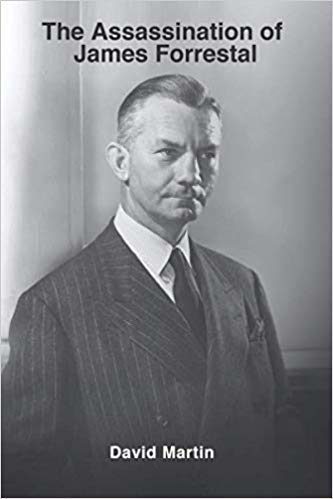 “Before he can kill you, he must kill your name.” ~ Scene from The Gladiator

James Forrestal had a successful career on Wall Street at Dillon, Read & Co. Inc, rising from an entry level position as bond trader to run the firm in 1937. I described Forrestal in Dillon Read & the Aristocracy of Stock Profits:

“James Forrestal’s oil portrait always hung prominently in one of the private Dillon Read dining rooms for the eleven years that I worked at the firm. Forrestal, a highly regarded Dillon partner and President of the firm, had gone to Washington, D.C. in 1940 to lead the Navy during WWII and then played a critical role in creating the National Security Act of 1947. He then became Secretary of War (later termed Secretary of Defense) in September 1947 and served until March 28, 1949.”

David Martin has just published The Assassination of James Forrestal documenting his investigation into the assassination of Secretary Forrestal on May 22, 1949. Forrestal was killed shortly after his forced resignation in March, his “house arrest” at Bethesda Naval Hospital on the pretext that he was unstable, and immediately before the CIA Act was enacted in June 1949.

In combination, the National Security Act of 1947 and the CIA Act of 1949 established the legal framework for the US black budget. Combined with the seizures of assets from WW II to help create a hidden system of finance, the CIA and the US intelligence agencies became the most powerful bankers on the planet with the ability to field significant “secret money for secret armies.” This was combined with a strategic decision to open US consumer markets to narcotics trafficking to pool low cost capital to help build the Anglo-American empires multinational infrastructure. The various partnerships between mafias, organized crime networks and the British and US intelligence and enforcement networks this required have been described – including by Hollywood.

Assassination is a tool used to decide policy debates. Indeed, the power to kill with impunity is the greatest political power on the planet. By simply eliminating effective leadership with important networks and knowledge, it is possible to change the course of events. If you study the work and assassinations of Secretary Forrestal, Senator Joseph McCarthy, President John Kennedy and Senator Robert Kennedy, you realize what a different country the United States would be if they have managed to stay alive and in position.

Martin has done a remarkable job of sleuthing out the available facts of what happened. He was able after multiple FOIAs to obtain and publish the Navy’s investigation into Forrestal’s death. With much digging and hard work, he was able to sort through what evidence is available and the sources of the smear effort designed to persuade the general population that Forrestal had a nervous breakdown and had committed suicide. it is a case study on the conversion of garbage into “official history” which cascades through journalists and historians through the years.

For those interested in my series on Deep State Tactics, the smear on Forrestal was one of the worst in modern US history. It is worth studying to understand the “bribes and bullet” strategy that has built the organized crime juggernaut in America. Martin does an excellent job of helping you see many of the tactics used on Forrestal – providing a case study on how the “skriek-o-meter” gets away with murder.

Martin believes that it was the Zionist organized crime networks that engineered Forrestal’s murder due to his opposition to the creation of the state of Israel. Indeed, Forrestal was assassinated eleven days after Israel was admitted as a member of the UN by majority vote on May 11, 1949. This is certainly a possibility – they were and still are as dangerous and ruthless as Martin describes.

For those interested in how we ended up with the Neocons, 9-11, $6 trillion in Middle Eastern Wars and $21 Trillion missing from DOD and HUD, Forrestal’s warnings are prescient.

I continue to wonder about Forrestal’s opposition to a black budget. Martin points out the President Eisenhower’s grandson had reported that President Truman had tasked then General Eisenhower to “push Forrestal out [of office].” Given the powers that Eisenhower vested in the CIA, one wonders if a partnership between the Dulles brothers and the Rockefellers and the Zionists was involved. Something akin to “You get Israeli nationhood, we get the CIA and the black budget.”

How did things get so bad? When you assassinate the best and the brightest and use the shriek-o-meter to promote thugs, then thugs is what you get. If thugs have the ability to use “bribes and bullets” with impunity, then thugs run countries and international orders. Crime that pays is crime that stays.

As you watch President Trump get lobbied and bullied by the current leadership of Israel and their financial backers, you might find a history of the slander and assassination of James Forrestal instructive.

The Dillon partners were not fools. There was a reason that Forrestal’s portrait still graced the partners dining room nearly fifty years after he left the firm to enter public service.

Forrestal’s legacy endures because, in the end, truth matters.