EPSTEINgate: It’s Much Bigger Than Anyone Knows

Rothschild vs Trump. Will the new entry in the updated Jewish bible be Book of Trump or Book of Rothschild? The Adelsons are praying for the Book of Trump.

“Would it be too much to pray for a day when the Bible gets a ‘Book of Trump’, much like it has a ‘Book of Esther’ celebrating the deliverance of the Jews from ancient Persia?” [Miriam] Adelson asked. (Jerusalem Post) 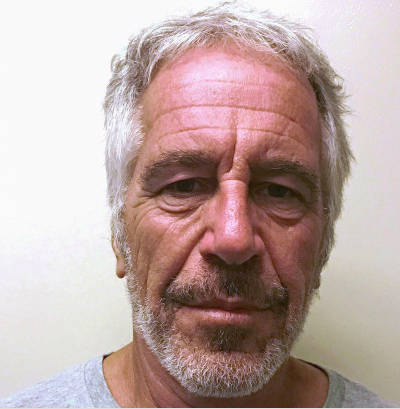 It makes one’s understanding of Trump much less of a puzzle if one sees him as a crypto-Jew and, by means of that disguise, a very big big-shot of the Jews — like his father, Frederick CHRIST Trump Sr. The evidence in brief: Frederick Christ Trump Jr, Donald’s elder brother who drank himself to death at an early age, joined a Jewish fraternity at Lehigh University, Sigma Alpha Mu, and told his fellow Sammies that, despite the name, his father was actually a German Jew. Some of those Sammies told the New York Times about it, as we learn from its background report on the new president concerning his late brother. Wikipedia mentions that the father, despite his seeming gentileness was widely taken to be a Jew because of his large benefactions to Jewish religious education in Israel and his wide support of Jewish charities. Both husband and wife died in Jewish nursing homes. This sounds like a would-be macher (yiddish for big mover and shaker) crypto-Jew. To what end? Some sort of service to Jews that would be better done in goy-guise. Such as heading a manifestly anti-Jewish organization, such as the KKK, as seversl other crypto-Jews have done. During the campaign an NYT clipping from the 20s surfaced for a day, and was then quickly dropped by the supposedly hostile Jewish-controlled media. Frederick Trump, the head of the Bayside KKK, had been arrested in a riot. So dedicated a Jew would marry a Jew or have her convert (as did Lord Rothschild’s mother). The Trump family documentation has been fiddled with, as one would expect from the “Christ” middle name. Trump’s mother’s records have been so muddied that some accounts lead to the inference that she was her own mother. Two of Trump’s wives and possibly all three are Jews. Four of Trump’s children and possibly all five were born Jews, and all the adult ones have Jewish partners. Most notable is Ivanka, who pretended to convert to marry Kushner — to keep heritage Americans fooled.

That Trump is a Jew in disguise who intensely identifies with the role clarifies otherwise puzzling policies. From day one Trump has done all he can for Jews, be it the Goldman Sachs appointments or war or virtual war via sanctions on Syria, Hezbollah and Iran. Trump has done the minimum for heritage Americans. The Wall is nowhere to be seen. It’s not five-dimensional chess. It’s someone who intensely identifies as a Jew and pretends to be a heritage American continuing his family tradition of service to Jews through crypsis.

Ultra-Zionism is now Trump’s undoing. To be the biggest macher in Jew history Trump is doing everything he can think of for Israel. The embassy move. Golan. The Deal of the Century. The threat of sanctioning Europe. And he’s working at the obliteration of Iran.

Trump, from the beginning of his campaign has had Iran in his sights since it is the key force opposing Israel, and he has focused on ending American commitment to the nuclear treaty. The Rothschilds, through their Economist mouthpiece, have strenuously opposed Trump’s scrapping of the accord. What they feared has now come to pass and they are really, really annoyed. Funny how Lord R’s son was once dating the Trump bimbo. It’s no coincidence the viral bimbo-snub was by Rothschild servitors Lagarde, May, Macron and Trudeau.

Here’s another thrust from R.

“Britain’s man in the the US says Trump is ‘inept’: Leaked secret cables from ambassador say the President is ‘uniquely dysfunctional and his career could end in disgrace'”

Leaked. Oh dear. And it just happens that the R-tentacle in DC foresees disgrace. Wonder if that goes beyond pussy grabbing. Must do. Epstein has just been arrested. Trump is known to have traveled on the Lolita Express at least once. What about leaked Mossad films? Katie J saysit was all openly being filmed. It was part of the excitement.

Hitler expressed in his memoirs the view that behind the Zionist wish for a Jewish homeland was the aim of conferring sovereign immunity on a criminal tribe. There are those who say that Israel’s Mossad is actually a private army at the disposal of the Rothschilds, meaning that in a contest of wills between the Rothschilds and the Israeli government, the private Rothschilds would command Mossad loyalty. The head of the Rothschild clan was after all the private individual to whom the Balfour declaration was addressed.

Epstein is a Potemkin ‘billionaire’. There is no credible normal accounting for his apparent wealth, of which the source and amount are both suspect. So his sex (and child sacrifice?) retreats must be a Mossad blackmail operation — or, for insiders, a means of generating mutual trust through mutual blackmailability. Could this arrest be the Rothschilds sacrificing Epstein, one of their own, a major resource? Some days before the arrest a federal appeals court in Florida ordered the unsealing of 2000 pages of documents pertaining to his case. He could have scooted to Israel where state policy forbids the extradition of Jews, but he continued to hover about the scenes of his ugly crimes. Did he think he was invulnerable — or is it his job is to confess and take Trump down with him in a plea bargain?

Trump is on record saying to New York magazine in 2002:

“I’ve known Jeff for fifteen years. Terrific guy, He’s a lot of fun to be with. It is even said that he likes beautiful women as much as I do, and many of them are on the younger side.”

We will soon know if Trump’s name is in the unsealed documents. So here’s what Trump slyly lets out in a staged scene with Hannity:

Sean Hannity to Trump : “Bill Clinton?”
Trump : “Nice guy. Uhh. Got a lot of problems coming up, in my opinion, with the famous island, with Jeffrey Epstein.”

Trump aims to distinguish himself from the heavily Lolita-Express-compromised Clinton, Trump’s own documented one trip notwithstanding, and to give the impression that the arrest is at his initiative. But it’s not. It’s an autonomous act by prosecutors of the United States Attorney’s Office for the Southern District of New York, which has the reputation of ‘having its own foreign policy’. (They have considerable autonomy from the justice department, but their lack of action re 9/11 suggests they are controlled by some external force.)

Trump rewarded well the Florida federal attorney who had got Epstein the sweetheart deal of the century for his multiple counts of pedophile rape. Trump made Acosta his secretary of labor. Recently, Trump’s administration refused to follow the court order against that sweetheart deal:

“His arrest, first reported by the Daily Beast, comes nearly two weeks after the Justice Department announced that it would not throw out his 2008 non-prosecution agreement, even though a federal judge ruled it was illegal.”

Trump has been solidly with Epstein. The initiative for taking Epstein down came from elsewhere.

Christine Pelosi in a tweet laments that certain ‘faves’ are about to get taken down in the Epstein affair, though it’s all for the ultimate good. Christine, a political player in her own right, is Nancy Pelosi’s daughter. Fathered by a Jew and married to a Jew, she is also halachically Jewish, though one is not supposed to think that. Her famous mother, who passes for Catholic, is from a Jewish Argentine family, Dalesandro. Like her parents (and daughter) Nancy is under crypsis. Nancy certainly looks Jewish and you can’t look more Jewish than CHRISTine. (The major expose of Nancy’s identity was by judicial-inc.biz whose webmaster, before his website went silent, had complained that he was being threatened by the ADL. In those days the directories of Latin American Jewish names listed Dalesandro. The name has since been scrubbed.)

Big Jews are divided in a family quarrel. Nancy Pelosi and her daughter are main agents of the Rothschild/Rockefeller/globalist faction as opposed to the Adelson/Trump/nationalist/Likudnik-Zionist side. That Nancy has for decades harbored a Chinese spy in her office is no coincidence.

Christine’s faves are surely Big Jews and their main servitors such as the Clintons. Faves are on both sides of the divide. They are all Zionists in the larger sense, supporters of the quest for Jew-dominated world empire. For the really Big Jews Israel itself is but a step to the real goal, of world domination through money power. (In their bible God promises Jews world domination, and sanctions their use of usury against other peoples.) World domination through money power is dearer than the Likudnik hold over Palestine. Indeed, the colony there is getting to be more and more a liability and increasingly less a cherished focus of identity.

A lot of Christine’s faves will have to be let go. She doubtless knows that crypto-fave Trump is about to be squashed.

Xymphora is dead wrong about theEpstein arrest being for Israel.

It is of course against Trump, but it is not “Khazar anger at Trump’s failure to attack Iran”. It is Rothschild anger at crypto-Jew Trump for putting Israel above the Judaic dark pool of capital with his crazy policy of seeking to obliterate Iran for Israel.

Trump has spent a fortune on developing “usable” nukes for the purpose. Putin has made two pertinent statements, one in his state of the nation address of 2018, and one though his close friend and national security advisor Patrushev.

“I believe it [is] my duty to say this: any use of nuclear weapons of any yield — small, medium or whatever — against Russia or its allies will be regarded as a nuclear attack against our country. Retaliation will be instant with all the ensuing consequences.”

The second, delivered in Israel to a much-ballyhooed tripartite conference of Russia, America and Israel is:

“Iran has been and will be an ally and partner of ours, with which we have [been] gradually developing ties for quite some time, both bilaterally and multilaterally.”

The Jerusalem Post gets the idea. The headline is

“RUSSIA SWEARS IRAN IS ITS ALLY, AFTER TRILATERAL MEETING WITH PM, BOLTON.

As Bernhard of Moon of Alabama points out, Iran will not back down unless Trump undoes the damage wrought by the sanctions and the breaking of the nuke deal. Iran, with its back against the wall, will drive the price of oil up to two hundred dollars and above, imploding the global economy, and there’s nothing Trump can do about it.

…Well, not nothing. He’s an impulsive oaf and he could go ahead and sink the global economy or even destroy the planet.

That’s why a number of faves have got to be sacrificed.

Look to Trump getting media-hammered with disgrace.

And look to Rothschild’s main agent, Soros, a recent covert to the anti-war cause, along with others of his kind, coming to the support of Tulsi Gabbard.

It’s worth remembering that among the early Zionists, along with the Rothschilds, were idealists who envisioned a final coming together of Ashkenazis with their brothers the Palestinians, a people genetically identical to Yemeni Jews, the last surviving fragment of the original Abrahamic Hebrews. Since the Rothschilds are rethinking basics, one can even imagine a one man one vote solution to Palestine.

Trump won the mantle of great white hope through deception. Now that he’s being attacked by an array of directed power he cannot counter, do we dare hope for better times?

From the editor: Given the potential for blackmail of senior U.S. officials who flew on “The Lolita Express”, this case may have foreign policy implications.