Theresa May will make the case for her new Brexit plan in Parliament later, amid signs that Conservative opposition to her leadership is hardening.

The prime minister will outline changes to the Withdrawal Agreement Bill – including a promise to give MPs a vote on holding another referendum.

But shadow Brexit secretary Sir Keir Starmer said the offer was “too weak”.

Some senior Tories will today ask party bosses for a rule change to allow a no-confidence vote in her leadership.

Environment Secretary Michael Gove defended the PM’s plan, urging MPs to “take a little bit of time and step back” to “reflect” on the detail of the bill – due to be published later today.

Fellow cabinet minister and prominent Brexiteer Andrea Leadsom said she was “looking very carefully at the legislation” and “making sure that it delivers Brexit”.

MPs have rejected the withdrawal agreement negotiated with the EU three times, and attempts to find a formal compromise with Labour have failed.

On Tuesday, the prime minister asked MPs to take “one last chance” to deliver a negotiated exit – or risk Brexit not happening at all.

But several Tory MPs have criticised her plan. Among them, Nigel Evans will today urge party bosses on the 1922 committee to change party rules to allow for an immediate vote of no-confidence in Mrs May.

Because the PM survived such a vote in December, the current rules say she cannot face another for 12 months.

The committee has said ‘no’ to such a change before.

But the Conservative Home website has urged people not to vote for the party in Thursday’s European elections if Mrs May is still in post “by the end of today”. 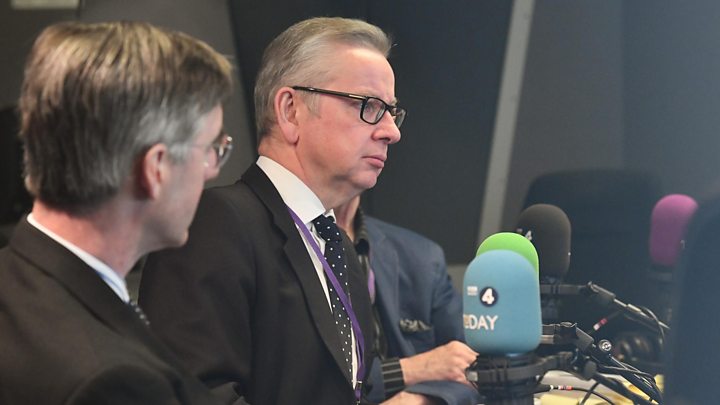 The cabinet minister tells Today that MPs have the choice of a deal, no deal or no Brexit

BBC political correspondent Iain Watson says a small number of Labour MPs have gone to a briefing with the government’s Brexit negotiator, Olly Robbins, to discuss the deal.

But a number of the party’s MPs have spoken out against the PM’s plan, with Sir Keir saying all she had offered was votes on customs arrangements and a further referendum that MPs would be able to get anyway as amendments to the bill.

He told BBC Radio 4’s Today programme: “This is not a compromise of policy, it is just saying you can have votes on these things.

“In reality, the prime minister ought to now admit defeat. I think she would do well to just pull the vote and pause, as this is just going to nowhere.”

Leader of the Liberal Democrats, Sir Vince Cable, echoed the point, telling Today: “If [Mrs May] said ‘we will put forward the Withdrawal Bill subject to a confirmatory referendum’… we would be obliged to support it on that basis, but she is barely saying Parliament can have a vote if it wants to have a referendum.

“[That] is not in her gift, Parliament will do that anyway. What appears to be a concession isn’t.”

The BBC’s political editor Laura Kuenssberg said if the government tries to delay bringing the bill forward – expected in the week of 3 June – it is “extremely hard to see” how the prime minister stays in post after the Bank Holiday weekend.

Other senior Tories have suggested Mrs May drops her Withdrawal Agreement Bill to avoid defeat and humiliation.

Conservative MP Boris Johnson – who wants to succeed Mrs May as prime minister – said on Twitter: “We are being asked to vote for a customs union and a second referendum. The Bill is directly against our manifesto – and I will not vote for it.

“We can and must do better – and deliver what the people voted for.”

Tory MP Priti Patel accused the “entire cabinet and especially the so-called Brexiteers in office” of being “responsible for the betrayal” of Leave voters.

It’s become a painful ritual of a tortuous process: the prime minister unveils a vision for Brexit, and MPs queue up to demolish it in the House of Commons. On Wednesday it looks like it is going to happen again.

If Theresa May’s speech yesterday sought to attract switchers – and turn sceptics into endorsers – it failed.

Worse than that for Downing Street, some Conservatives who backed the plan when it was last voted on, now say they’ll reject it.

Among many Conservative MPs, there is a bleak, end of days mood. Some wonder if it’s even worthwhile putting the bill to a vote.

Others ponder getting rid of the prime minister even sooner than she’s promised. But those around Theresa May insist they are not willing to give up at least yet – they are determined her plan will be put to MPs in around a fortnight’s time.

Mrs May is bringing the Withdrawal Agreement Bill – legislation required to bring her agreement into UK law – to Parliament in early June.

In an attempt to win over MPs across the House, she announced the following concessions:

In a letter to Labour leader Jeremy Corbyn, released on Wednesday, Mrs May said: “I have shown today that I am willing to compromise to deliver Brexit for the British people…

“I ask you to compromise too so that we can deliver what both our parties promised in our manifestos and restore faith in our politics.” 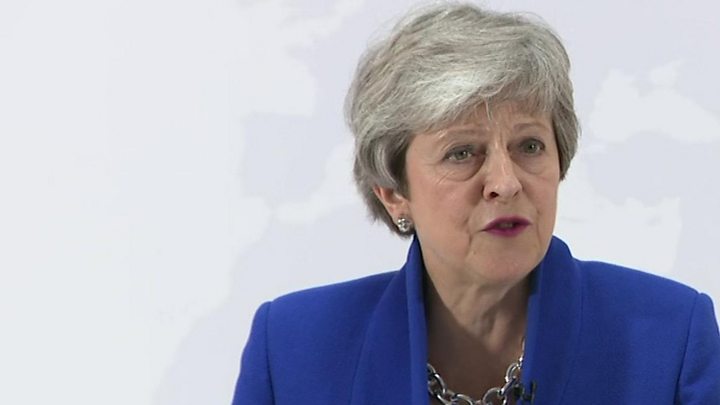 But Labour has said it is not willing to back the bill at second reading, meaning it could fail at its first parliamentary hurdle.

And some Conservative MPs who backed Theresa May the last time she tried to get her withdrawal agreement through Parliament in March said they could no longer support her.

Tory MP Nadine Dorries said all scenarios led to Mrs May resigning, telling the BBC’s Victoria Derbyshire: “I see no way out for the prime minister. I think we might be reaching the end game finally for [Mrs May].”

Meanwhile, Sammy Wilson, the Brexit spokesman for the DUP – whose support the government relies on to get its laws passed – said his party would “not accept this flawed agreement” that they believe would split Northern Ireland from the rest of the UK.

He told Today: “We have been through all of this before with the prime minister in the negotiations to date. It has been accepted by the government that [there] are flaws they cannot give an answer to.

“We will not vote for our own destruction.”