ALBANY – A new law in New York will allow law enforcement officials, family members or school officials to seek a petition to seize the guns of people that courts find are dangerous to themselves or others.

The Red Flag Law, also known as the extreme risk protection order law, will give authorities or household members the ability to seek a court order that would prohibit a person for up to one year from purchasing or possessing a firearm.

The Democratic governor, with House Speaker Nancy Pelosi at his side, said the measure will give school officials, in particular, the ability to ensure troubled students do not have access to guns — a way, he said, to hopefully limit school shooting.

Pelosi said the New York law should inspire Congress to act on new gun-control laws. The Democrat-led House is set this week to pass a bill to mandate federal background checks on all gun sales, but it faces an uphill fight in the GOP-controlled Senate.

“Mr. President, if you want to talk about emergencies, this is an emergency,” Pelosi said, in reference to Trump’s recent emergency declaration for border security.

Opponents said they are concerned the measure will allow people to too easily seek to strip away owners’ guns.

Here are details of the new law, which will take effect in 180 days.

What will the law do? 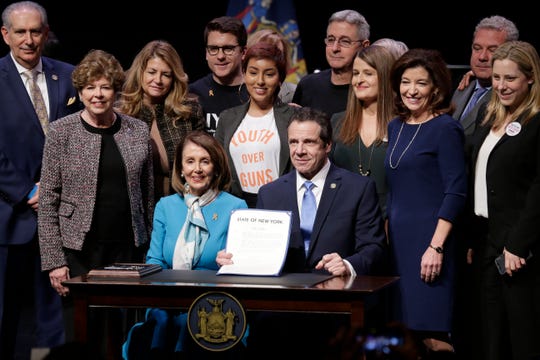 House Speaker Nancy Pelosi, center left, joins New York Governor Andrew Cuomo, center right, as they pose for a picture after signing a gun control bill at a ceremony in New York, Monday, Feb. 25, 2019. Cuomo signed a “red flag” bill, which attempts to prevent people who present a threat to themselves or others from purchasing or owning a gun. (Photo: Seth Wenig, AP)

The law adds New York to about a dozen states that have enacted similar measures to get guns out of the hands of mentally ill people or where there is evidence a person could harm themselves or others.

So police, district attorneys, family or household members, or school administrators or their designees could petition a court to have an order of protection issued to a person to prevent them from:

“…purchasing, possessing or attempting to purchase or possess a firearm, rifle or shotgun.”

To grant the order, a judge must find probable cause to believe the respondent “is likely to engage in conduct that would result in serious harm to himself, herself, or others” as defined by the state’s mental hygiene law.

What happens in court?

Once the court rules, a temporary extreme risk protection order is issued. That prevents the person from having guns or going to purchase any.

Then, within three to six days later, there is a hearing on a final extreme risk protection order, which would be in effect for up to one year.

The official or family member seeking the order must provide:

“clear and convincing evidence that the petitioner is likely to engage in conduct that would result in serious harm to himself, herself, or others.”

How are weapons removed?

If the final order is granted by a judge, the owner will have to relinquish their weapons to law enforcement, which will retain them during the length of the order.

Any firearm license will also be suspended during the duration of the order.

The owner can appeal a court’s decision through the state’s appeals courts. They can also request during the one-year order period for a hearing to reconsider the case.

Police after taking any weapons have to leave a receipt for the confiscated firearms with the owner.

What other appeals are there?

Before the one-year period is up, the person who sought the order can file a request for a renewal of the order within 60 days of its expiration of an existing order.

Then there will be another round of hearings.

Some lawmakers are opposed to the new law. The measure is one of several new gun-control laws the Legislature, controlled by Democrats, passed last month.

Assemblyman Brian Manktelow, R-Lyons, Wayne County, said the Red Flag Law may be well intended, but it has too many loopholes.

“We are doing nothing to help these people during the time it takes to get this order in place, nor are we doing anything to help them during the three- to six-day period while they wait for a hearing. In that time a person can find another way to hurt themselves or others,” Manktelow said in a statement last month.