The Arab Spring: Made in the USA

Arabesque$: Enquête sur le rôle des États-Unis dans les révoltes arabes(Investigation into the US Role in the Arab Uprisings) is an update of Ahmed Bensaada’s 2011 book L’Arabesque Américaine. It concerns the US government role in instigating, funding and coordinating the Arab Spring “revolutions.” Obviously most of this history has been carefully suppressed by the western media. 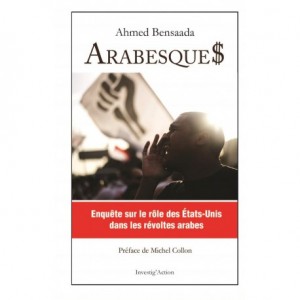 The new book devotes much more attention to the personalities leading the 2011 uprisings. Some openly admitted to receiving CIA funding. Others had no idea because it was deliberately concealed from them. A few (in Egypt and Syria) were officially charged with espionage. In Egypt, seven sought refuge in the US embassy in Cairo and had to be evacuated by the State Department.

According to Bensaada, the MENA Arab Spring revolutions have four unique features in common:

Bensaada begins by introducing non-violent guru Gene Sharp (see The CIA and Nonviolence), his links with the Pentagon and US intelligence, and his role, as director of the Albert Einstein Institution, in the “color” revolutions.2in Eastern Europe and the attempted coup against Hugo Chavez in 2002.))

The US goal in the Arab Spring revolutions was to replace unpopular despotic dictators while taking care to maintain the autocratic US-friendly infrastructure that had brought them to power. All initially followed the nonviolent precepts Sharp outlines in his 1994 book From Dictatorship to Democracy. In Libya, Syria and Yemen, the US and their allies were clearly prepared to introduce paid mercenaries when their Sharpian “revolutions” failed to produce regime change.

Relying mainly on Wikileaks cables and the websites of key CIA pass through foundations (which he reproduces in the appendix), Bensaada methodically lists every State Department conference and workshop the Arab Spring heroes attended, the dollar amounts spent on them by the State Department and key “democracy” promoting foundations3, the specific involvement of Google, Facebook, Twitter and Obama’s 2008 Internet campaign team in training Arab Spring cyperactivists in encryption technologies and social media skills, US embassy visits, and direct encounters with Hillary Clinton,  Condoleezza Rice, John McCain, Barack Obama and Serbian trainers from CANVAS (the CIA-backed organization that overthrew Slobodan Milosevic in 2000).

Bensaada focuses most heavily on the Tahrir Square uprising in Egypt. The Washington Post has estimated approximately 10,000 Egyptians took part in NED and USAID training in social media and nonviolent organizing techniques. For me the most astonishing information in this chapter concerned the role of an Egyptian exile (a former Egyptian policeman named Omar Afifi Suleiman) in coordinating the Tahrir Square protests from his office in Washington DC. According to Wikileaks, NED paid Suleiman a yearly stipend of $200,000+ between 2008-2011.

In the section on Libya, Bensaada zeroes in on eleven key US assets who engineered the overthrow of Gaddafi. Some participated in the same State Department trainings as the Middle East opposition activists and instigated nonviolent Facebook and Twitter protests to coincide with the 2011 uprisings in Tunisian and Egypt. Others, in exile, underwent guerrilla training sponsored by the CIA, Mossad, Chad and Saudi Arabia. A few months after Gaddafi’s assassination, some of these same militants would lead Islamic militias attempting to overthrow Assad in Syria.

Between 2005 and 2010, the State Department funneled $12 million to opposition groups opposed to Assad. The US also financed Syrian exiles in Britain to start an anti-government cable TV channel they beamed into Syria.

In the section on Syria, Bensaada focuses on a handful of Syrian opposition activists who received free US training in cyberactivism and nonviolent resistance beginning in 2006. One, Ausama Monajed, is featured in the 2011 film How to Start a Revolution about a visit with Gene Sharp in 2006. Monajed and others worked closely with the US embassy, funded by the Middle East Partnership Initiative (MEPI). This is a State Department program that operates in countries (such as Libya and Syria) where USAID is banned.

In February 2011, these groups posted a call on Twitter and Facebook for a Day of Rage. Nothing happened. When Sharpian techniques failed to produce a sizable nonviolent uprising, as in Libya, they and their allies (Saudi Arabia, Turkey, Qatar and Jordan) were all set up to introduce Islamic mercenaries (many directly from Libya) to declare war on the Assad regime.