Ocasio is on the loose! The best socialist to ever happen to the Democrat Party

Freshman lawmaker Alexandria Ocasio-Cortez dropped a hammer on Joe Lieberman on Thursday, after the onetime Democratic vice presidential candidate said he feared her brand of high-tax socialism could doom the party’s chances for long-term dominance in Congress.

‘I certainly hope she’s not the future and I don’t believe she is,’ Lieberman said in a Fox Business Network interview. He retired in 2013 after serving 24 years in the U.S. Senate.

The 29-year-old Ocasio-Cortez retweeted the 76-year-old’s sentiment with a four-word rejoinder: ‘New party, who dis?’

‘Who dis?’ is a common response to a text message from an unknown number. Among millennials in the smartphone generation, the phrase has morphed into a snarky tool for rejecting someone by framing their approach as a mistake. 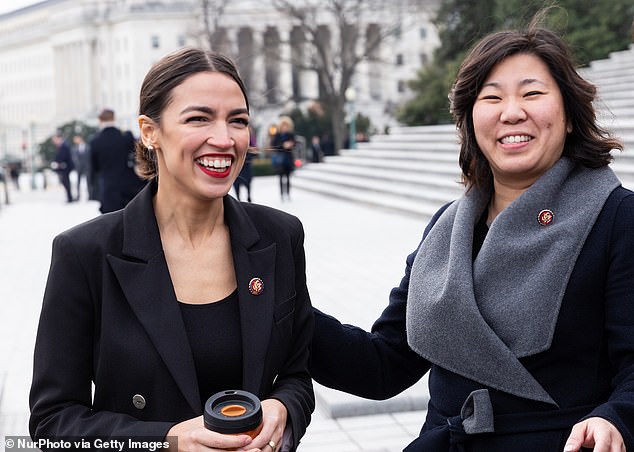 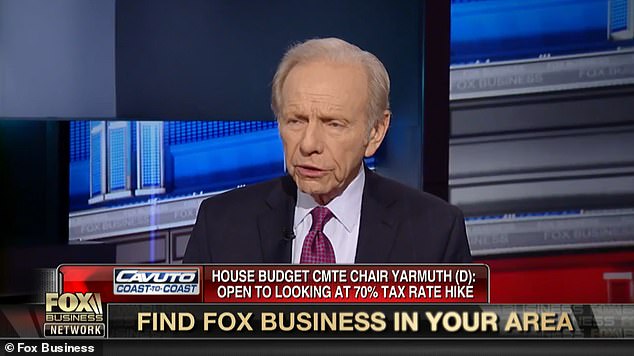 Former Democratic vice-presidential nominee Joe Lieberman, a 76-year-old retired U.S. senator, said his party will lose voters in the long term if Ocasio-Cortez’s ideas become its bread and butter: ‘I certainly hope she’s not the future and I don’t believe she is’ 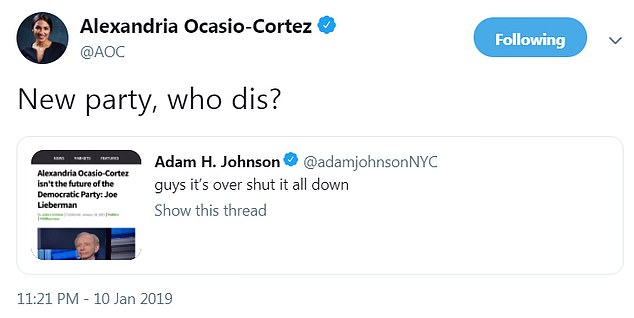 Just a few weeks into the new Congress, Ocasio-Cortez is already causing heartburn among centrist Democrats who are wary of her unapologetic proposal to raise the top marginal income tax rate to 70 per cent.

Lieberman said Thursday that she’s too ‘left-left’ to help the Democratic Party be a sustainable political powerhouse.

‘If you look at the majority of new Democrats in the House,’ he said, ‘they tend to be – I say, center-left … and that is because they had to be center-left to win some of those competitive swing districts that they took from Republicans.’ 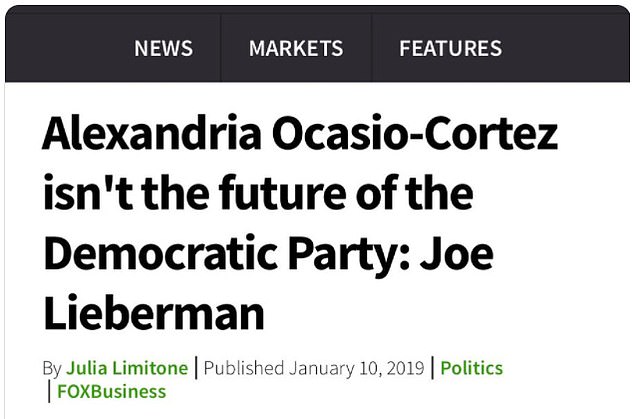 Lieberman made his comments on the Fox Business Network; news of his interview quickly reached Ocasio-Cortez on social media.

Ocasio-Cortez also advocates for an ambitious ‘Green New Deal’ that calls for a transition to a 100 percent renewable energy system and the complete replacement of America’s power grid as a means of generating jobs and saving the natural environment.

Price-tag estimates for carrying out that agenda – costs that taxpayers would bear – range from $2 trillion to $51 trillion.

Similarly, Ocasio-Cortez is pushing for a ‘Medicare for All’ medical insurance overhaul in the U.S., an ambitious plan that would put much of the industry in the hands of government.

Vocal critics of the approach say it’s an expensive clone of socialized medicine systems found in Canada, Scandinavia and elsewhere.

‘More, please,’ a Republican Senate aide told DailyMail.com on Friday. ‘Honestly, if the Democrats had 3 more of her, Americans would run away so fast that we’d have a power monopoly until she’s Lieberman’s age.’

Despite Ocasio-Cortez’ telegenic approach to self-promotion and her social media star power, Democratic House leaders have sought to sideline her in practical ways that could limit the public’s exposure to her less mainstream views.

When she made a play this month for a seat on the powerful Ways and Means Committee, a senior Democrat told Politico that ‘[i]t totally pissed off everyone. You don’t get picked for committees by who your grass-roots [supporters] are.’

Veteran Democratic members suspected Ocasio-Cortez was behind a siable online campaign to convince Speaker Nancy Pelosi to give her the plum appointment.

And she is expected to loudly advocate for Democratic primary campaigns against some of the middle-of-the-road members of her own party in Congress.

Her new chief of staff, Saikat Chakrabarti, told supporters during a November conference call that ‘we gotta primary folks.’