Democrat Alexandria Ocasio-Cortez, who won her bid for a seat in the House of Representatives in New York’s 14th Congressional District, at the Kennedy School’s Institute of Politics at Harvard University, Thursday, Dec. 6, 2018. (AP Photo/Charles Krupa)

“Republican hypocrisy at its finest: saying that Trump admitting to sexual assault on tape is just ‘locker room talk,’ but scandalizing themselves into faux-outrage when my sis says a curse word in a bar,” Ocasio-Cortez wrote Saturday on Twitter, referring to Trump’s lewd comments on a 2005 “Access Hollywood” tape that surfaced during the 2016 campaign. “GOP lost entitlement to policing women’s behavior a long time ago. Next.”
“I got your back,” she added in a tweet to Tlaib, “the Bronx and Detroit ride together.”

Republican hypocrisy at its finest: saying that Trump admitting to sexual assault on tape is just “locker room talk,” but scandalizing themselves into faux-outrage when my sis says a curse word in a bar.

At a progressive event hours after she was sworn in on Thursday, Tlaib said of Trump: “We’re gonna go in there and we’re going to impeach the motherf****r.”
After some in her party, including House Speaker Nancy Pelosi, disapproved of her language, Tlaib did not apologize or back down from her comments. 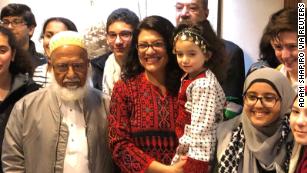 Pelosi reacts to Tlaib’s impeachment comment: ‘Nothing worse than the President has said’
“I know that if I was a man it might have been differently,” she said Friday in an interview with CNN affiliate WDIV in Detroit. “I know that, for me, I’ve always been this way. I mean, I think no one expects me to be anything but myself, the girl from southwest Detroit with a little sass and attitude.”
She added, “I think, you know, President Trump has met his match.”
At a news conference Friday, Trump called Tlaib’s comments “disgraceful” and said she had “dishonored her family.”
During a town hall event hosted by MSNBC, Pelosi said she herself “wouldn’t use” Tlaib’s language but added, “I don’t think it’s anything worse than anything — what the President has said.”
“I don’t like that language. I wouldn’t use that language. I don’t establish any language standards for my colleagues,” she said in the town hall at Trinity Washington University.
During her campaign, Tlaib made clear that if elected, she would push for Trump’s impeachment.
Ocasio-Cortez told CNN on Friday that impeachment was “an issue that she’s passionate about,” referring to Tlaib.
“I certainly think it a valid question and it’s one that a lot of voters were interested in having in the run-up to the election,” Ocasio-Coretz said. “It’s a legitimate discussion to have.”