John McCain Shows Again Why He’s Unfit To Serve As U. S. Senator

There are two very different press accounts of ‘Senator’ John McCain’s recent behavior at a Congressional hearing.  First is the alternative news report written by a member of Code Pink, Medea Benjamin.  The second one is from the MSM, ABC News.  The two narratives are so divergent one might wonder if they describe the same event (person).
— State of the Nation

Why Code Pink Says Kissinger Is the Real “Low-life Scum”

A very angry Senator John McCain denounced CODEPINK activists as “low-life scum” for holding up signs reading “Arrest Kissinger for War Crimes” and dangling handcuffs next to Henry Kissinger’s head during a Senate hearing on January 29. McCain called the demonstration “disgraceful, outrageous and despicable,” accused the protesters of “physically intimidating” Kissinger and apologized profusely to his friend for this “deeply troubling incident.”

But if Senator McCain was really concerned about physical intimidation, perhaps he should have conjured up the memory of the gentle Chilean singer/songwriter Victor Jara. After Kissinger facilitated the September 11, 1973 coup against Salvador Allende that brought the ruthless Augusto Pinochet to power, Victor Jara and 5,000 others were rounded up in Chile’s National Stadium. Jara’s hands were smashed and his nails torn off; the sadistic guards then ordered him to play his guitar. Jara was later found dumped on the street, his dead body riddled with gunshot wounds and signs of torture.

Despite warnings by senior US officials that thousands of Chileans were being tortured and slaughtered, then Secretary of State Kissinger told Pinochet, “You did a great service to the West in overthrowing Allende.”

Rather than calling peaceful protesters “despicable”, perhaps Senator McCain should have used that term to describe Kissinger’s role in the brutal 1975 Indonesian invasion of East Timor, which took place just hours after Kissinger and President Ford visited Indonesia. They had given the Indonesian strongman the US green light—and the weapons—for an invasion that led to a 25-year occupation in which over 100,000 soldiers and civilians were killed or starved to death. The UN’s Commission for Reception, Truth and Reconciliation in East Timor (CAVR) stated that U.S. “political and military support were fundamental to the Indonesian invasion and occupation” of East Timor.

If McCain could stomach it, he could have read the report by the UN Commission on Human Rights describing the horrific consequences of that invasion. It includes gang rape of female detainees following periods of prolonged sexual torture; placing women in tanks of water for prolonged periods, including submerging their heads, before being raped; the use of snakes to instill terror during sexual torture; and the mutilation of women’s sexual organs, including insertion of batteries into vaginas and burning nipples and genitals with cigarettes. Talk about physical intimidation, Senator McCain!

You might think that McCain, who suffered tremendously in Vietnam, might be more sensitive to Kissinger’s role in prolonging that war. From 1969 through 1973, it was Kissinger, along with President Nixon, who oversaw the slaughter in Vietnam, Cambodia and Laos—killing perhaps one million during this period. He was gave the order for the secret bombing of Cambodia. Kissinger is on tape saying, “[Nixon] wants a massive bombing campaign in Cambodia. He doesn’t want to hear anything about it. It’s an order, to be done. Anything that flies on anything that moves.”

Senator McCain could have taken the easy route by simply reading the meticulously researched book by the late writer Christopher Hitchens, The Trial of Henry Kissinger. Writing as a prosecutor before an international court of law, Hitchens skewers Kissinger for ordering or sanctioning the destruction of civilian populations, the assassination of “unfriendly” politicians and the kidnapping and disappearance of soldiers, journalists and clerics who got in his way. He holds Kissinger responsible for war crimes that range from the deliberate mass killings of civilian populations in Indochina, to collusion in mass murder and assassination in Bangladesh, the overthrow of the democratically elected government in Chile, and the incitement and enabling of genocide in East Timor.

McCain could have also perused the warrant issued by French Judge Roger Le Loire to have Kissinger appear before his court. When the French served Kissinger with summons in 2001 at the Ritz Hotel in Paris, Kissinger fled the country. More indictments followed from Spain, Argentina, Uruguay—even a civil suit in Washington DC.

The late Christopher Hitchens was disgusted by the way Henry Kissinger was treated as a respected statesman. He would have been appalled by Senator McCain’s obsequious attitude. “Kissinger should have the door shut in his face by every decent person and should be shamed, ostracized, and excluded,” Hitchens said. “No more dinners in his honor; no more respectful audiences for his absurdly overpriced public appearances; no more smirking photographs with hostesses and celebrities; no more soliciting of his worthless opinions by sycophantic editors and producers.”

Rather than fawning on him, Hitchens suggested, “why don’t you arrest him?”

Hitchens’ words were lost on Senator McCain, who preferred fawning to accountability. That’s where CODEPINK comes in. If we can’t get Kissinger before a court of law, at least we can show—with words and banners—that there are Americans who remember, Americans who empathize with the man’s many victims, Americans who have a conscience.

While McCain called us disgraceful, what is really disgraceful is the Senate calling in a tired old war criminal to testify about “Global Challenges and the U.S. National Security Strategy.” After horribly tragic failed wars, not just in Vietnam but over the last decade in Iraq and Afghanistan, it’s time for the US leaders like John McCain to bring in fresh faces and fresh ideas. We owe it to the next generation that will be cleaning up the bloody legacy left behind by Kissinger for years to come. Sen. John McCain earned some applause inside a Senate Armed Services hearing this morning after he erupted at protesters of former Secretary of State Henry Kissinger, calling them “low-life scum.”

“I’ve been a member of this committee for many years, and I have never seen anything as disgraceful and outrageous and despicable as the last demonstration that just took place,” said McCain, R-AZ.

Protesters from the group CodePink swarmed behind Kissinger as he arrived alongside two other former Secretaries of State, Madeleine Albright and George Shultz, for a hearing on U.S. national security strategy.

They held up signs calling Kissinger a criminal and chanted “arrest Henry Kissinger for war crimes” — citing some of his more controversial decisions during the Nixon and Ford administrations. 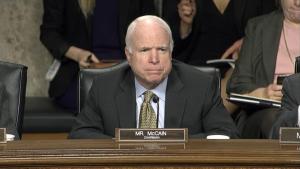 “You know, you’re going to have to shut up, or I’m going to have you arrested,” McCain said as Capitol Hill Police tried to remove the protesters. “Get out of here you low-life scum.”

Kissinger, 91, didn’t acknowledge the protesters, who again interrupted him later in the hearing prior to his opening statement.

“Dr. Kissinger, I hope on behalf of all of the members of this committee on both sides of the aisle — in fact, from all of my colleagues, I’d like to apologize for allowing such disgraceful behavior towards a man who served his country with the greatest distinction,” McCain said. “I apologize profusely.”

In a statement today following the hearing, McCain further condemned the CodePink protest, saying members of the group “physically threatened” Kissinger to the point that “some senators were concerned enough… that they came down off the dais to support the witnesses.”

“With no U.S. Capitol Police intervening, the episode went on for several minutes,” McCain said in his statement. “I have spoken to the Chairman of the Senate Rules Committee and the U.S. Capitol Police, and expect that those responsible will be held fully accountable for their actions.”