Ferguson Protests Across The USA Funded By Billionaire George Soros

CALLED IT: Billionaire George Soros Funded the Highly Organized Ferguson Protests to the Tune of $33 Million 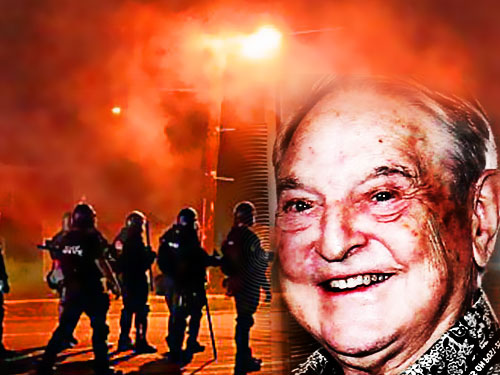 Remember back after the Michael Brown shooting and in the lead up to the Darren Wilson grand jury decision when I reported on the fact that “direct action trainings” for protesters were being held across the country, and highly organized protests were scheduled in some 83 cities (including one in Canada!) complete with a fancy social media campaign designed by skilled graphic artists?

At that point, they weren’t even being called “protests” anymore, but  “planned responses” organized through something called the “Ferguson National Response Network”.

“This is not your average civil disobedience. Martha Stewart has thrown less organized birthday parties than this. There are White House functions with less planning and training involved. Anyone else get the sense that this whole thing has been co-opted?”

Then a little further down —

A little over a week ago, The Washington Post ran an article titled, “Ferguson protest organizers: ‘I sleep, eat and breathe this.’”

But a common thread runs through some of the most influential organizers. They are black, relatively new to civil rights activism and technologically savvy, masters of social media. Using Twitter, Vine and Instagram, they mobilize their peers, document every twist and turn, and annotate history in real time.

New to activism, huh? And yet, wow, they just so happen to be influential, savvy tech masters of social media who know how to mobilize everyone? No, that doesn’t stink of George Soros-funded phony color revolution stuff at all… (That was sarcasm, of course.)

It was just way too over-the-top to be believed. “There is a highly organized, scripted, funded, targeted agenda playing out in Ferguson, and people are basically falling for it,” I concluded.

This week, Washington Times investigative journalist Kelly Riddell is reporting that billionaire George Soros funded groups behind the organization of the Ferguson protesters to the tune of $33 million in just one year through his Open Society Foundation.

Here are a few excerpts from her exposé:

Other Soros-funded groups made it their job to remotely monitor and exploit anything related to the incident that they could portray as a conservative misstep, and to develop academic research and editorials to disseminate to the news media to keep the story alive.

The plethora of organizations involved not only shared Mr. Soros‘ funding, but they also fed off each other, using content and buzzwords developed by one organization on another’s website, referencing each other’s news columns and by creating a social media echo chamber of Facebook “likes” and Twitter hashtags that dominated the mainstream media and personal online newsfeeds.

So Soros paid for everything Ferguson unrest, from the artsy social media campaigns, to the organization on the ground, to the exploitation and propaganda in the press.

“The financial tether from Mr. Soros to the activist groups gave rise to a combustible protest movement that transformed a one-day criminal event in Missouri into a 24-hour-a-day national cause celebre,” Riddell wrote.

It’s no wonder Obama left his vacation early to meet with Attorney General Eric Holder on the Michael Brown shooting. He had orders from his boss.

Some community organizer. Just goes to show that some people use their exorbitant wealth to at least superficially pretend they are helping humanity, while others spend it openly and blatantly drumming up mass civil unrest on racial lines in an overblown police state to further bring down a nation.

For more on how Soros likes to tear countries apart as if the real world is simply an elite billionaire’s game of Risk, see Ukraine, Egypt, Tunisia, Serbia, Georgia, and Turkey — and that’s just for starters.

The top rated comments (the first receiving nearly 1300 ^ votes) at the bottom of the WA Times’ story at least shows that people are waking up to what’s going on here: 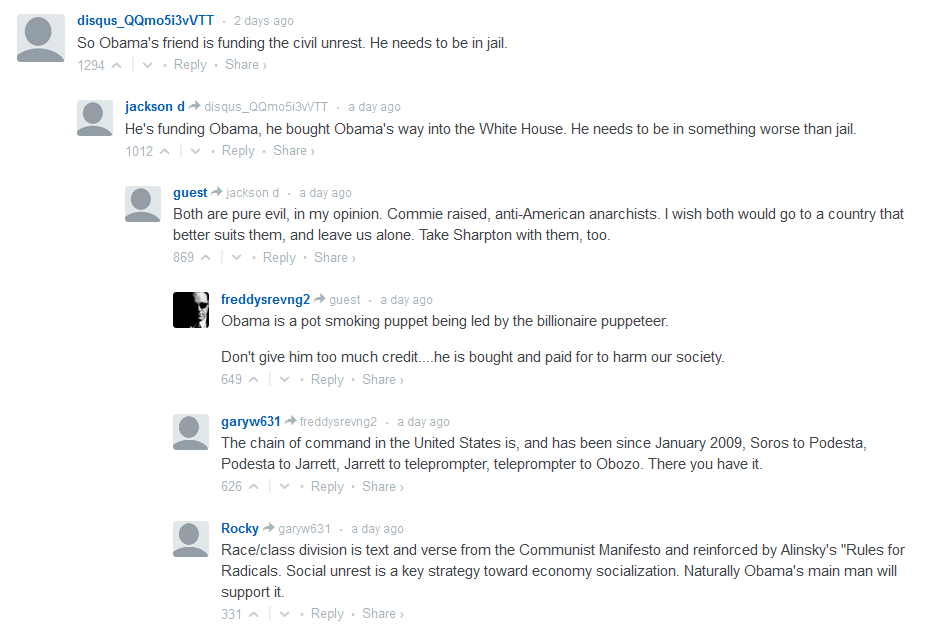 disqus_QQmo5i3vVTT: So Obama’s friend is funding the civil unrest. He needs to be in jail.

jackson d: He’s funding Obama, he bought Obama’s way into the White House. He needs to be in something worse than jail.

guest: Both are pure evil, in my opinion. Commie raised, anti-American anarchists. I wish both would go to a country that better suits them, and leave us alone. Take Sharpton with them, too.

freddysrevng2: Obama is a pot smoking puppet being led by the billionaire puppeteer. Don’t give him too much credit….he is bought and paid for to harm our society.

garyw631: The chain of command in the United States is, and has been since January 2009, Soros to Podesta, Podesta to Jarrett, Jarrett to teleprompter, teleprompter to Obozo. There you have it.

Rocky: Race/class division is text and verse from the Communist Manifesto and reinforced by Alinsky’s “Rules for Radicals. Social unrest is a key strategy toward economy socialization. Naturally Obama’s main man will support it.