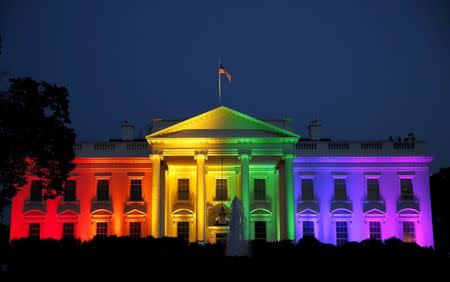 During a special presentation of the popular live storytelling podcast “The Moth Radio Hour” at this year’s Aspen Ideas festival, former Obama speechwriter Jon Lovett shared a story about how, years before gay marriage would become legal nationwide, he secretly performed a same-sex marriage at the White House.

“I went into politics for the reasons most people do: ambition, self-righteousness, and a desire to help others,” Lovett said, according to a writeup in Saturday’s Playbook. If you’ve spent any time in Washington, you know that the desire to help others is optional, and for members of Congress, it’s frowned upon.”

Lovett, who also previously served as Hillary Clinton’s speechwriter during her time in the Senate as well as her first presidential campaign, worked for President Obama for three years before leaving Washington for Hollywood in 2011. He co-created the short-lived NBC comedy “1600 Penn,” became a producer on HBO’s “The Newsroom” and is currently working on a new politically minded series for Showtime.

“I remembered that I worked at the White House, and I could give tours any time I want,” Lovett recalled in Aspen. So he decided to use that privilege to carry out a supersecret operation: performing a first same-sex marriage at the White House.

“Steve and Justin and I walked through the double doors into the ground floor of the West Wing, past the Situation Room, down the hall past the offices of the [National Security Council], up the stairs by the Cabinet room and the Oval Office, through the doors of the Colonnade that connect the offices of the West Wing to the stately rooms of the residence, and we turned right down the stone path that jutted into the Rose Garden, and then I said, ‘Steve, do you take Justin to be your lawfully wedded husband? And Justin, do you take Steve?’”

“We were very nervous. They were nervous because they were getting married. I was nervous because I snuck into my boss’ house to perform a wedding against his wishes in his backyard,” he said. “You can say what you will about the first same-sex marriage at the White House, at the very least, it was quite rude.”

“They kissed modestly,” he continued. “And then I filed the paperwork — the only real evidence that this took place, because I had to list the address: 1600 Pennsylvania Ave.”