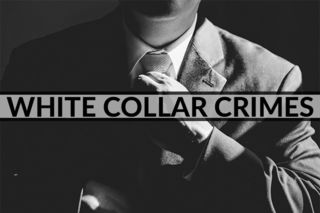 Given the tremendous attention that is given to street crime by politicians, law enforcement authorities, judges and the news/entertainment media, one would think that street crime is the costliest type of criminal activity in the U.S. That is simply not the case.

If you are shocked by these statistics it is not surprising. So much more attention is directed to street that most of us simply do not realize the magnitude and consequences of white-collar crime and other forms of elite deviance in the U.S.

Moreover, white-collar and elite criminals benefit from institutionalized non-enforcement practices, regulatory policies and legal representation not available to lowly street criminals. As a result, white-collar criminals are extremely difficult to apprehend and prosecute, even when they do tremendous harm to society.

Contrary to what many people believe, white-collar crime is not a victimless crime. A single scam can destroy a company, devastate families by wiping out their life savings, or cost investors billions of dollars (or even all three, as in the infamous Enron case). Today’s fraud schemes, including Bernie Madoff’s “Ponzi scheme,” are more sophisticated than ever, according to the FBI.

Wealthy elite criminals such as Madoff or Bernie Ebbers of WorldCom can hire the finest defense attorneys in the world to represent them in court, as well as prestigious public relations firms to spin their criminality into acts of charity and goodwill. Poor street criminals cannot afford such luxuries.

Moreover, the crimes of privileged individuals within the context of either legitimate corporations or government offices frequently go undetected and unprosecuted due to the relative power, status and political influence of the perpetrators. Such individuals are often shielded from prosecution by corporate law and their greedy allies who have similar interests.

Indeed, as far back as 1956, the late sociologist C. Wright Mills observed that a small group of wealthy and powerful individuals control America’s dominant institutions (i.e., politics, economy and the military) and they are insulated from public scrutiny. Mills called this group the power elite. Interestingly, Mills was echoed in 1961 by President Eisenhower in his farewell address when he warned of the self-serving and criminal acts of the “military-industrial complex”—that is, his term for the power elite.

A central contradiction of the power elite is that they frequently violate the very laws they are sworn to uphold. Mills argued that bound by mutual interests, the power elite periodically commit acts of elite wrongdoing (e.g., dumping toxic waste) and enact policies (e.g., deregulation of dangerous industries) that are designed to preserve their political power and protect their profits. Mills stated that elite acts that cause either physical or social harm represent the “higher immorality of the power elite” or simply elite deviance.

Acts of elite deviance take place in part because of the way corporate, political, and military intelligence institutions are structured—that is, they are complex bureaucracies. Significantly, bureaucratic organizations are structured in ways that regularize crime and deviance. More specifically, bureaucracies are goal-oriented, amoral entities which exist to maximize profits and/or expand their own power. These goals encourage ends over means mentality among the top commanders of bureaucracies.

For example, the top executives of a public, for-profit corporation are well aware that the board of directors and shareholders are much more interested in meeting quarterly profit goals than they are in the actual decisions and actions required to meet those goals.

The higher immorality of the power elite is also possible because the elites do not have to win the moral consent of those over whom they hold power. Instead, according to Mills, a passive society simply trusts that the elites will act on behalf of the so-called public interest.

C. Wright Mills argued that this condition is accompanied by a “fear of knowledge” and anti-intellectualism in modern society. He concluded that the higher immorality is a systematic feature of the American societal elite. Its general acceptance by the public without critique is an essential feature of modern U.S. society, according to Mills.

C. Wright Mills made these critical observations back in 1956 and, arguably, they are even more relevant today. White-collar criminals may not look as scary or dangerous as many street criminals but they do far more harm to society. Let the buyer or voter beware.

I examine the public’s intense fascination with notorious and deadly serial killers in my book Why We Love Serial Killers: The Curious Appeal of the World’s Most Savage Murderers. To read the reviews and order it now, click

Dr. Scott Bonn is professor of sociology and criminology at Drew University. He is available for expert consultation and media commentary. Follow him @DocBonn on Twitter and visit his website docbonn.com